Since its inaugural race in 1950, Formula 1® has electrified fans across the globe with the sights and sounds of the world’s best drivers carving up the track at record-breaking speeds. Today, hundreds of millions of fans follow the spectacle on television, online and at the track. But it’s not just the thrill of the race that fascinates fans; it’s the cutting-edge technology. From the start, Formula 1® has been at the forefront of automotive innovation, spearheading advancements in composite materials, aerodynamics, safety and energy recovery, to name a few, that have directly benefitted the wider automotive industry.

DHL is proud to be the longest-standing global partner of Formula 1®. For nearly 40 years, DHL has ensured the smooth delivery of up to 2,000 metric tons of race cars, fuel and equipment to Formula 1® venues around the world. As Official Logistics Partner of Formula 1® since 2004, DHL staffs a team of motorsports logistics specialists, who work closely with Formula 1® Management and the teams to ensure seamless logistics support for races and official test runs. Just like out on the track, the behind-the-scenes action at a Grand Prix is all about speed, precision and state-of-the art technology.

And DHL’s involvement extends far beyond logistics. Formula 1® is one of the biggest entertainment platforms in the world, and as global partner DHL helps fans experience unforgettable moments both on and off the track. Since 2017, Fan Festivals offer a varied entertainment program away from the track at major cities around the world. DHL is also a founding partner of the F1® Esports Series and proud sponsor of two of the most coveted prizes in Formula 1® – the DHL Fastest Lap Award and DHL Fastest Pit Stop Award. At the end of each season, the driver with the fastest laps is presented with the DHL Fastest Lap Award, while the DHL Fastest Pit Stop Award goes to the team that most consistently achieves the fastest pit stops over the course of the championship.

DHL and Formula 1® are proud to announce the extension of their long standing global partnership, which spans across a number of decades.

Our team takes care of the race behind the race so you can enjoy the thrill of F1 in every corner of the globe.

DHL are our longest standing global partner and we are delighted to have signed a partnership extension that demonstrates our strong and collaborative relationship.

The fastest lap has a different importance because it’s another point in the championship, so it has a bigger meaning from now on.

DHL and Formula 1® are proud to announce the extension of their long standing global partnership, which spans across a number of decades.

Join us behind the scenes of Formula 1® and win great prizes in our quiz. 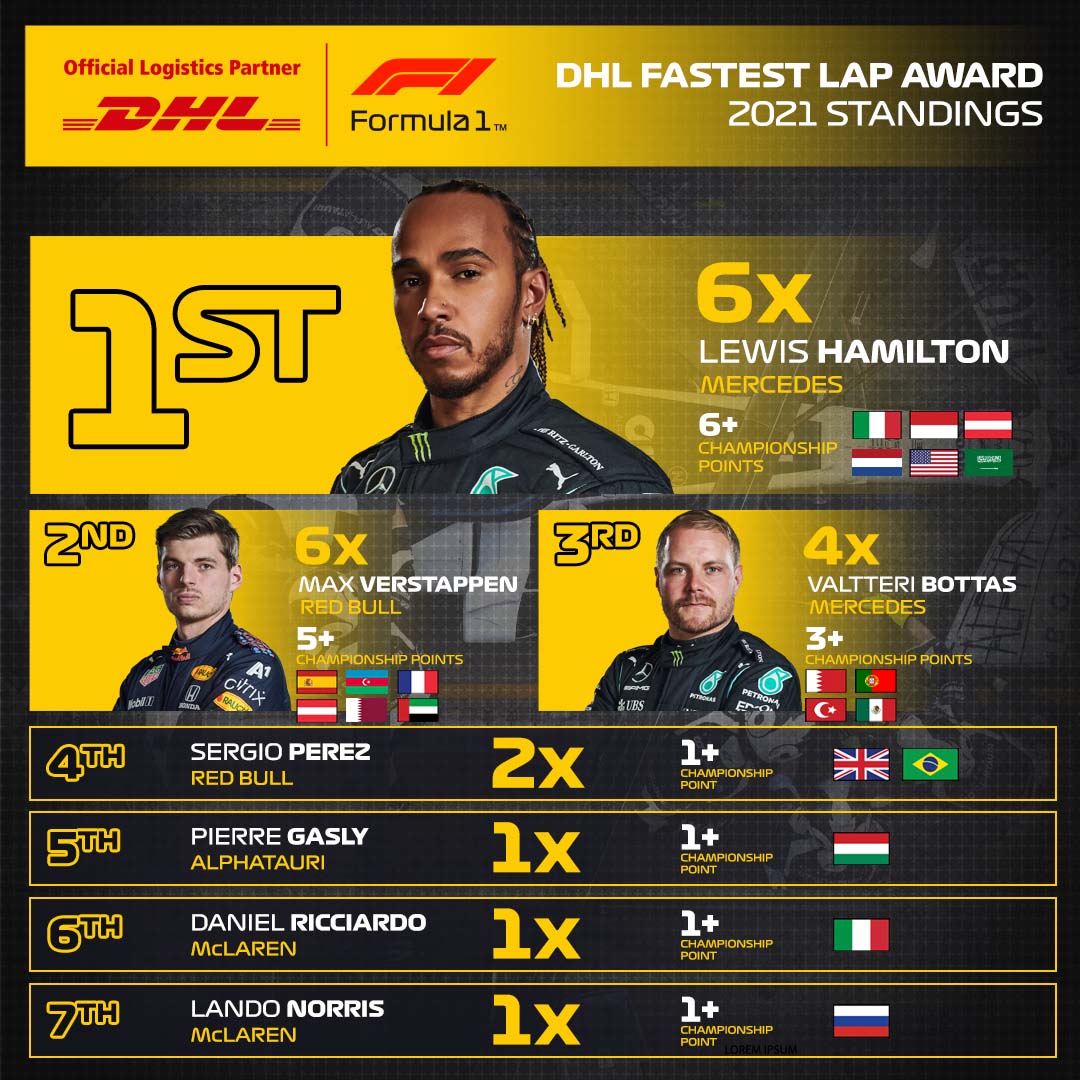 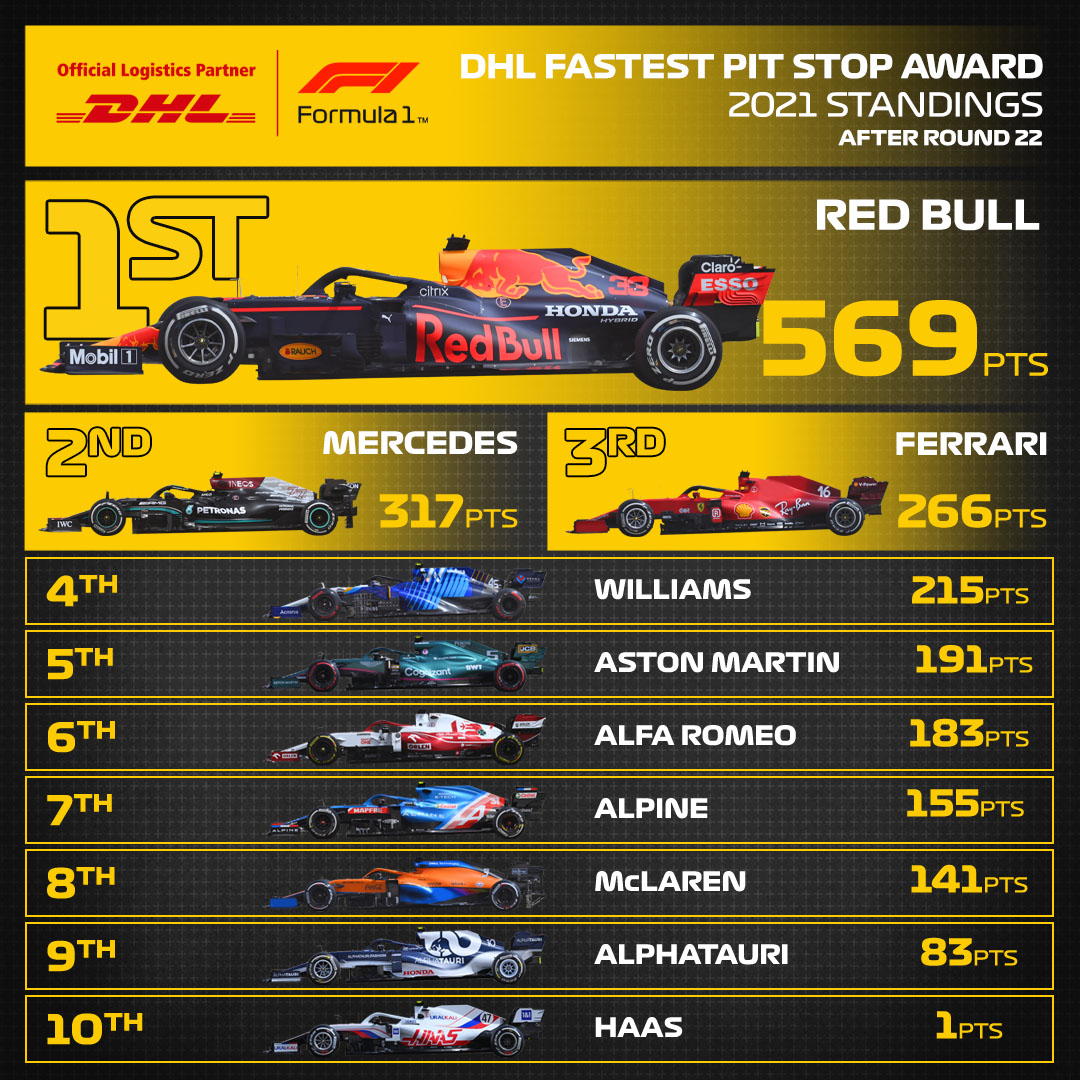 Lewis Hamilton is the winner of the DHL Fastest Lap Award after posting the fastest lap six times in the 22 races.

As a spectacular 2018 Formula 1 Championship season has come to an end, let`s take a look back at the unforgettable moments it delivered for fans from all over the world. The review features fans who had the chance to experience F1 live – as DHL's F1 Superfans!

Following the F1 ESports Draft at Silverstone in July, we searched high and low to find our very own draftee to take on Tom Deacon at the GFinity Arena during the series finale, in a race to become the DHL Digital Champion.

Don't miss any update anymore. Keep an eye on our Instgram account!

We connect people every day, improving their lives – with a dedicated team of more than 350,000 around the world.

Learn about our sector expertiseSee our products and solutions