At the FORMULA 1 ETIHAD AIRWAYS ABU DHABI GRAND PRIX 2019 on December 1, logistics partner DHL again presented two awards: the DHL Fastest Lap Award to the driver with the most fastest laps and the DHL Fastest Pit Stop Award to the team that most consistently achieved the fastest pit stops over the course of the season. The DHL Fastest Lap Award this season goes to Lewis Hamilton, who drives for the Mercedes-AMG Petronas Motorsport team and was crowned Formula 1 World Champion early this season.

High tension until the end of season

Six-time world champion Lewis Hamilton is the winner of the DHL Fastest Lap Award after posting the fastest lap six times in the 21 races. Charles Leclerc secured four fastest laps and finished in second pleace, ahead of Valtteri Bottas and Max Verstappen with three fastest laps each.

“Besides the performance in the drivers’ championship, fastest lap times have always been important in Formula 1, which is why our award is coveted by both drivers and teams,” added John Pearson. 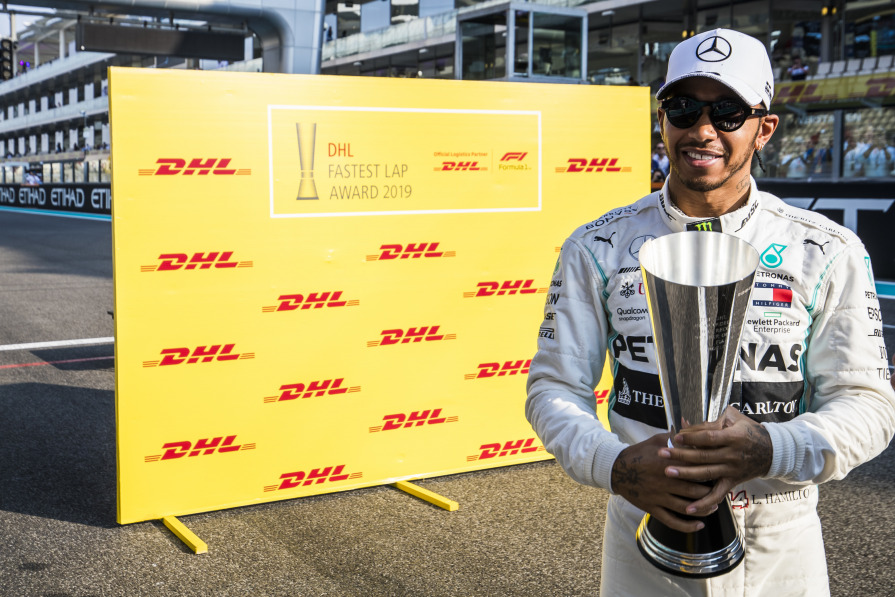 After thoroughly considering the matter in consultation with Formula 1, the FIA took that fact into account in this year’s regulations governing the battle for the championship, which introduced a bonus point to be awarded to the driver with the fastest lap time – provided he finishes in the top ten. Its reintroduction after six decades came about after canvassing the opinion of thousands of fans around the world over many months. “Although the bonus point was not decisive for the title this season, it delivered extra excitement and top driving performance,” says Pearson.

Fastest lap has a different importance this year because it’s another point in the championship, so it has a bigger meaning from now on.

With four awards, World Champion Lewis Hamilton is now the leading record holder for the DHL Fastest Lap Award, having overtaken Sebastian Vettel, who was previously level with him on three awards. Being asked about the award, Hamilton says: “Fastest lap has a different importance this year because it’s another point in the championship, so it has a bigger meaning from now on. It has been fun to chase the purple times at the end of the races, and I have had some really good laps – I can remember Silverstone, on older tyres and really pushing to the limit right before the chequered flag, in front of my home fans. The extra point has added some spice to the final laps of the races and it’s pretty cool that we’ve done a good job this year in that area.”

The DHL Fastest Lap Award was launched in 2007. It recognizes the driver who consistently achieves the fastest speed and sets the most fastest laps over the course of a season. The award is inspired by success criteria that are equally important in both F1 and logistics for delivering outstanding performance – speed, focus, reliability and precision.