Formula 1 is always on the move. The 21 races around the world represent a huge undertaking in terms of logistics, but back-to-back races are especially demanding for everyone involved in the championship. The races on successive weekends in Singapore and Russia are very tricky to deal with, requiring perfect planning and meticulous work under massive time constraints.

It’s Sunday in Singapore, just before midnight. As Sebastian Vettel celebrates his first win in more than a year, the paddock at the Marina Bay Street Circuit is bustling with activity. While the podium Top Three were showering themselves with champagne, team and FIA equipment were already being packed and loaded.

As a rule, paddock ‘pack-down’ begins immediately after the race has ended with no exceptions. However, that normally happens in the afternoon, in daylight. The race behind the race begins much later in Singapore. There are two reasons for that. First, Singapore is a night race and does not start until 8.00 pm local time. Second, it’s usually the longest Grand Prix of the season, lasting nearly two hours.

It’s a race against time

As a result, teams packing and loading sweat profusely – and not just because of high heat and humidity in the Southeast Asian metropolis. Just a few days later, the equipment has to be set up all over again in Sochi, the venue for the Russian Grand Prix, some 8,000 kilometers from Singapore. “It’s a race against time,” said Simon Price from DHL Global Forwarding. “We have seven to eight hours less for the entire logistics operation because of Singapore’s late start.”

The fact that Sochi is located five time zones west of Singapore is a bonus. “It gives us a chance to win back some time,” said Simon, who well remembers the triple header from the 2018 season when racing took place on three consecutive weekends for the first time in F1 history. “But of course, we will make it happen – we always do,” said DHL’s specialist with a smile, who has years of experience in motor racing logistics under his belt. 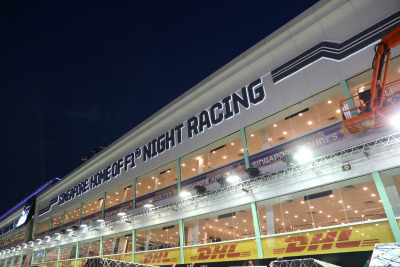 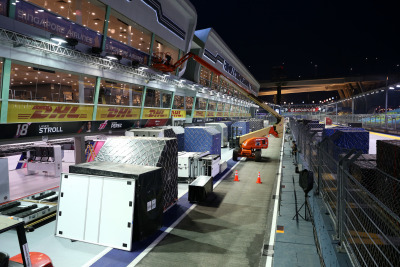 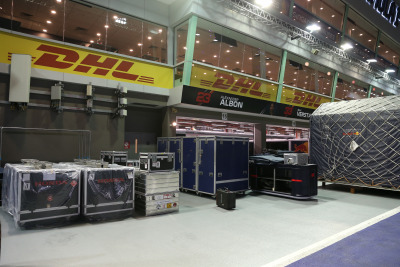 The paddock in Singapore is completely dismantled on Monday morning after eight grueling hours. Six Boeing 747 cargo planes, each holding 130 tons, then fly the equipment from Changi Airport directly to Sochi where everything is rebuilt in no time, on time for the paddock to open its doors again on Thursday for Media Day at the Russian GP.

Apart from the air freight, some F1 kit is shipped by sea. Each team has five sets of equipment in all, two to three of which are normally on a container ship, traveling to one of the next races in a perfectly choreographed piece of planning that started way before the season began.

“Let’s say you’ve got a piece of equipment like a vise. It’s not high in value but probably weighs 10 kilos, so it makes economic sense to duplicate it five times over and send it by sea, rather than to fly a single heavy object around the world,” said Formula 1 Sporting Director Steve Nielsen. “You wouldn’t do it with car parts, but you might with crowd control barriers or garage paneling, larger, heavier items that are relatively low cost.”

From Russia to Japan

The next long journey for F1 follows on from the Russian GP with another long haul flight of some 8,000 kilometers to the east for the Japanese GP at Suzuka which is not a back-to-back race this time around. There’s a weekend break in between, which takes the heat out of the schedule but does nothing to reduce the pressure.

“For us and the teams, it’s an incredibly complex process, almost like a military operation,” said Steve Nielsen. “There’s a huge amount of planning that happens in the background that people don’t see. But as I said, I’m constantly amazed by Formula 1’s ability to get it done, to pack down in one city or circuit and set-up again on the other side of the world in under a week and still deliver a world-class sporting spectacle.”

You see, in Formula 1, it’s not just on the race track that every thousandth of a second is hard-won. The race against time in between races also demands speed, precision, reliability and right first time.

Williams: F1 backmarkers but speedy in the pits