Red Bull Racing pit crew continue to impress with incredibly fast tire changes in Formula 1. After having already beaten Williams’ three-year-old record at Silverstone, they bettered it once again at Hockenheim. The DHL Fastest Pit Stop was over after an incredible 1.88 seconds, and Max Verstappen was quickly heading back on his way.

Red Bull had serviced Pierre Gasly’s car in just 1.91 seconds at Silverstone last time out, beating an old Williams’ record from 2016 as a result, but they proved that they could find another 0.03 seconds at Hockenheim.

DHL Fastest Pit Stop Award: All you need to know

Dramatic changes in weather and variable conditions characterized the German GP. The ten teams performed an incredible 78 pit stops in total with drivers continually switching from intermediates to slicks and back again.

And yet, Red Bull’s pit crew were able to produce an outstanding performance, executing five of the ten fastest stops in the race. Team Principal Christian Horner was delighted: “The pit stop crew were unbelievable today. That was the reason for sending our Chief Mechanic, Phil Turner, up to collect the Constructors’ Trophy, as he did an amazing job.” 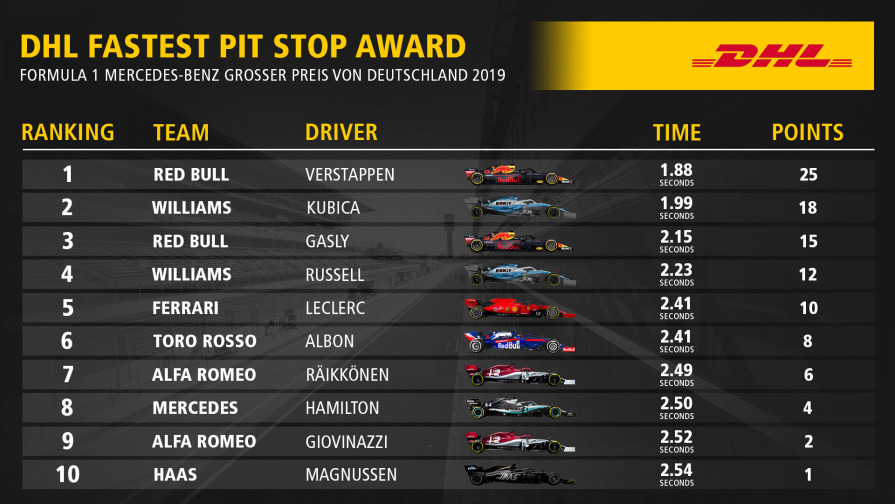 They finally brought Max Verstappen in for his fifth and final stop on Lap 46. The track had started to dry out at last after a long spell of drizzling rain, and Verstappen had to switch from intermediates to soft slicks for the final sprint to the line. At Red Bull, this was now the eighth of nine pit stops that the crew had undertaken for Verstappen and Gasly that afternoon due to the chaotic weather.

Nevertheless, they showed no signs of tiredness. After just 1.88 seconds, Verstappen was racing again and took the lead from Lance Stroll after only a few meters once back on track.

He then comfortably drove to his second win of the season. The record-breaking pit stop put the icing on the cake for Red Bull’s crew, who had earlier serviced Verstappen’s car in 2.04 seconds on Lap 25 and 2.11 seconds on Lap 41.

Williams: F1 backmarkers but speedy in the pits

The 1,000th F1 Grand Prix. What happened as the other special milestones were reached?