Red Bull have made history again in Brazil. For the third time in the 2019 season, they improved on the Formula 1 pit-stop record.

Red Bull have written Formula 1 history in the pits for the third time in 2019 by pulverizing their own record for the fastest tire change of all time. In an almost incredible 1.82 seconds, they managed to change all four tires on Max Verstappen’s car when it came in for the first of its three pit stops at Interlagos. For the eighth time, the team has also delivered the DHL Fastest Pit Stop.

DHL Fastest Pit Stop Award: All you need to know

When Formula 1 switched to larger and heavier tires in 2017, it seemed improbable that the record stop of 1.92 seconds performed by Williams in 2016 would ever be undercut. But after two years of intense practice, the Red Bull crew cracked the record for the first time in 2019 during the pit stop of Pierre Gasly at Silverstone with a time of 1.91 seconds.

A week later at Hockenheim, they went one better, servicing Max Verstappen in 1.88 seconds despite the wet conditions – the first ever stop under 1.90 seconds. Now, in Brazil, they have proved that it can be done even faster, shaving a further six hundredths off to post a time of 1.82 seconds. 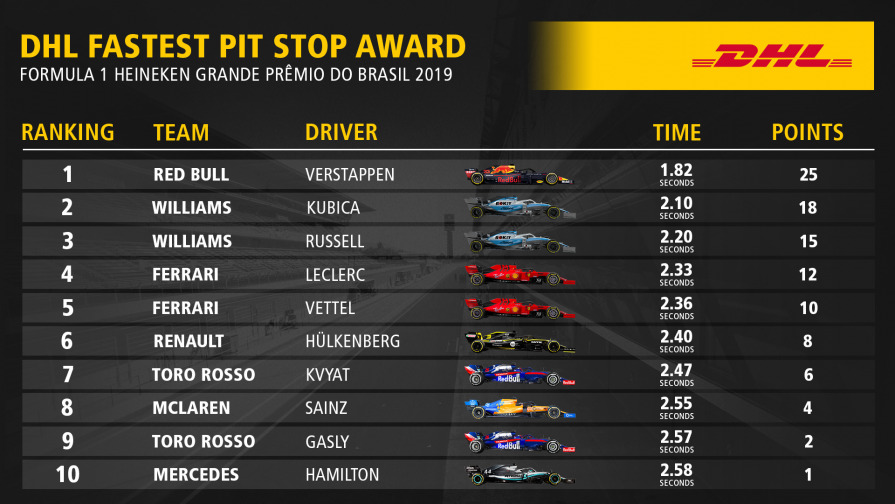 Brazil was perfect for Red Bull in every way. Not only did they set a new world record in the pits; Max Verstappen, starting from pole position, drove an outstanding race, in which he comfortably held world champion Lewis Hamilton at bay and won with a three-stop strategy.

Verstappen: “It wasn’t easy out there but the team made all the right calls, especially at the end to pit for the soft tires during the safety car which gave us the win today.” In addition to the record stop, the team put in the third quickest (2.12 seconds) and fourth fastest (2.17 seconds) of the race. Despite working under the mounting pressure of the battle for position on the track, they didn’t put a foot wrong.

“As a team you always try and make everything perfect,” says Verstappen. “I focus on my job, and the team also try to do a perfect job in the pits and on the strategy, and clearly today it worked out pretty perfectly.”

By virtue of their impeccable pit stops, Red Bull have now made themselves unassailable in the battle for the 2019 DHL Fastest Pit Stop Award. In the overall standings, they have 52 points ahead of second-placed Williams, with only the Abu Dhabi weekend remaining. They have also posted the five fastest stops of the year - 1.82, 1.88, 1.91, 1.93 and 1.96 seconds.