The 24-Hours of Le Mans are a motor racing highlight of the year. Huge demands are placed on man and machine in the endurance classic like in no other race.

Le Mans is the only 24-hour race on the FIA WEC calendar and one of its biggest draws. But Le Mans is much more than just another round in the championship. A win here ranks as one of the greatest successes in a racing driver’s career. For that reason alone, even Formula 1 world champions like Fernando Alonso and Jenson Button intend to fight for the overall win in 2018.

But achieving success in the classic race on the river Sarthe is a major challenge. Only those who have the stamina to go the distance and can find the right mix of fast, error-free driving over 24 tough hours have any chance of a podium. As Official Logistics Partner to the FIA WEC, DHL want to present you with five moments that deliver.

The race lasts 24 hours, but you would perhaps find that a bit hard to believe, watching the start. Many teams and drivers attack immediately, pushing the car to the limit right from the beginning in order to immediately take the lead and get a head start.

Does it have to be that way? Jacky Ickx proved the opposite to be the case in 1969 when the traditional Le Mans start was still the norm. Drivers would sprint across the track, had to then strap themselves into the car and set off. Being of the opinion that this was unsafe, Ford driver Ickx walked slowly and deliberately over the track to the car, got in and strapped himself carefully into his seat while everyone around him immediately began racing.

Who won? Ickx, of course, along with teammate Jackie Oliver. A careful start and caution in the race brought them victory. The much faster, stronger Porsche competition rushed headlong into the race at the start but failed to finish due to technical problems. 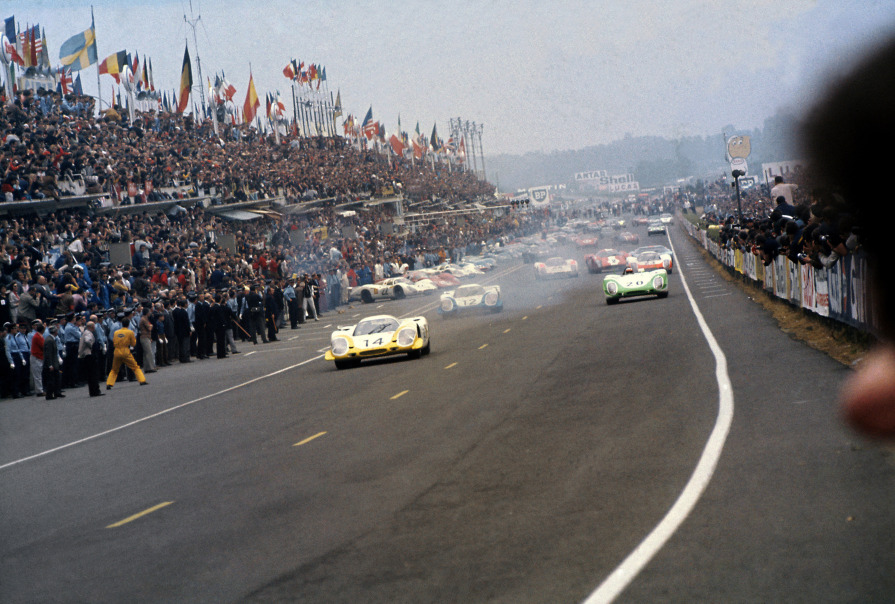 Moment 2: The race in the pits

A 24-hour race is not just run on the track. The first cars will come into the pits just 40 minutes after the start on Saturday to refuel and change tires. Cars will also change drivers at a later stage.

In all of this, it’s usually a case of the faster the better. It’s not just drivers, who can gain time at Le Mans. The faster the pit crews can turn the car around, the less time it will be stood stationary in the pits. The pressure is enormous. The mechanics have to service the car at least once every hour and cannot afford to make any mistakes.

But the pressure on them goes off the scale as soon as problems with the car crop up. How will they react to the unexpected? A speedy repair can save the race. Audi mechanics swapped a gearbox in just five minutes in the middle of the night, ultimately securing a triple victory for Audi. 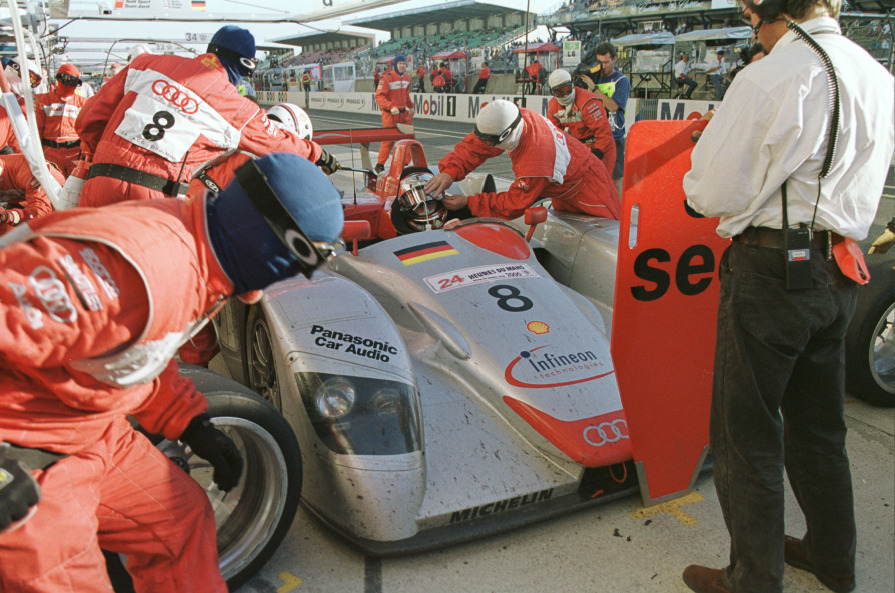 Night and darkness are a feature of every 24-hour race. At Le Mans, it’s especially dark at night. There are no floodlights or streetlights on the long straights and many turns towards the end of the track, only the individual headlights of the racing cars.

And Le Mans is a long circuit, winding over 13 kilometers of narrow country roads through the French forest. This is particularly tough on the slower GT cars as glaring headlights continually pop up in their rearview mirrors. The cars behind them are mere specks in the mirror, and so, it’s all about keeping calm and not getting twitchy. Otherwise, you will soon find yourself out of the race.

The opposite applies to the fast Le Mans prototypes. It’s better to ease off the gas and play safe rather than to overtake aggressively. LMP drivers have a better view of things, are in a faster car and should therefore engage their brains while overtaking. 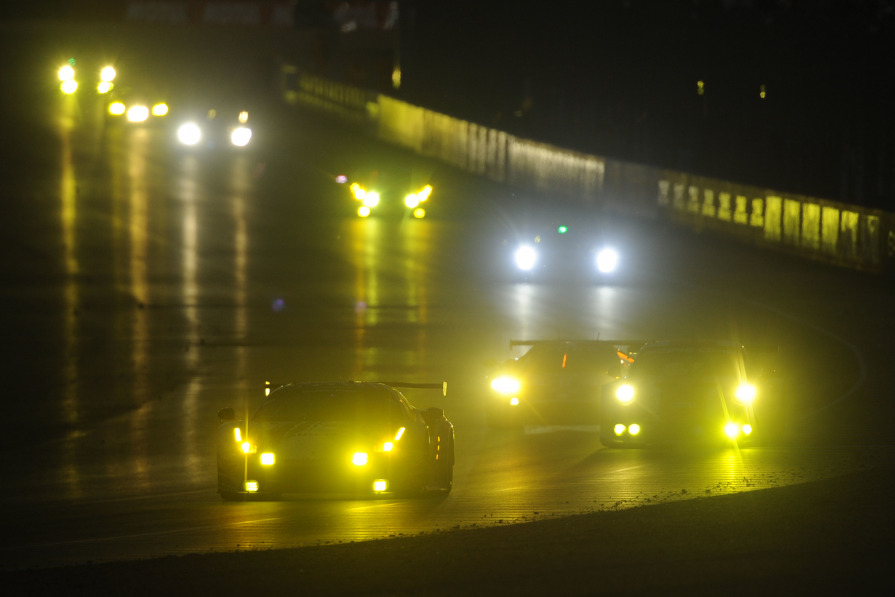 And finally, as the sun comes up on Sunday, the hardships really begin to take their toll, hitting everyone for six. This is when the famous photos of sleeping mechanics and exhausted teams are taken, and the scene is calm momentarily until the realization kicks in that there are still another nine hours to go and that you have to be back racing at once, because the car will soon be back in the pits again, and even after 15 hours, you can’t allow yourself to make any mistakes.

Concentration is particularly important on Sunday morning. This is the start of ‘happy hour’. A lot of rubber has been put down on the track after all that racing, so it’s very grippy. Temperatures are cool, engines are running well. Visibility is good, and not all cars are out on track after a hard night’s racing.

Fast lap times are still possible during ‘happy hour’ at this late stage in the races, and you can make up a lot of time if you’re still completely with it and can race on the limit. 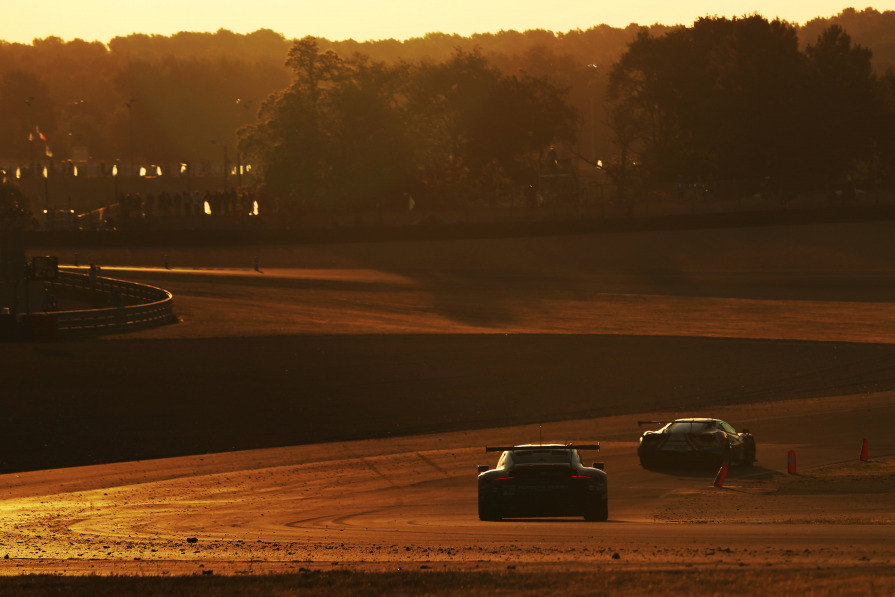 And that brings us to our final point. A 24-hour race lasts 24 hours, and not a second less. As the end quickly approaches, nobody can afford to lose concentration, make a mistake and suddenly find themselves off the track in the final few minutes.

And at the same time, the driver in second place must still grasp at straws and continue to push hard, hoping that the race leader might still make a mistake before 3 pm in the afternoon comes around. Only those who actually drive over the line after the time has elapsed are classified.

Should you find yourself in the lead, you have to pull out all the stops and go for it in that final hour. Porsche were close to victory in 1977 when engine problems reared their head. Making one supreme, last-ditch effort, the mechanics shut down one of the car’s six cylinders and driver Jürgen Barth limped around the circuit for a further two laps, clinging on by his fingernails in the Porsche to take the win at the finish line. 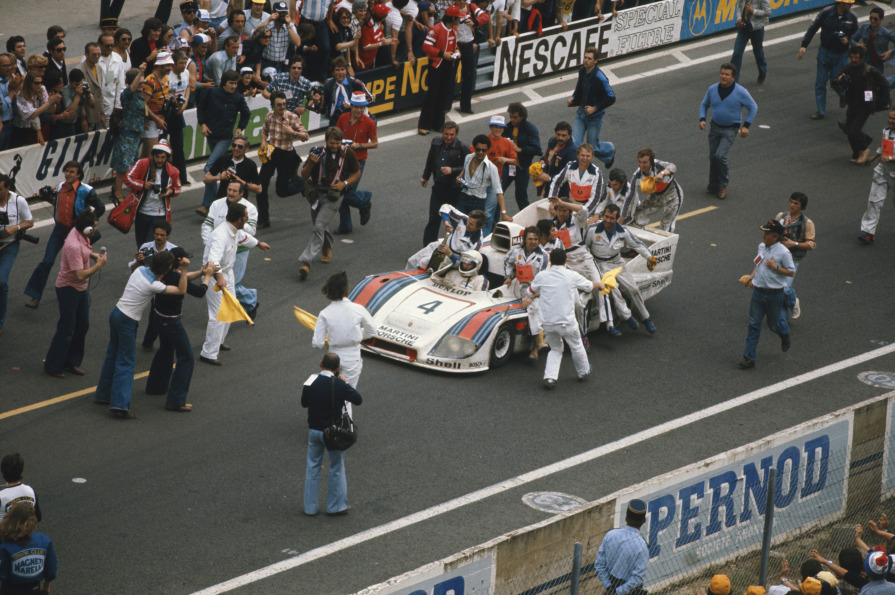