This year’s UNITED. DELIVERED. Grand Prize winners played a once-in-a-lifetime match on the hallowed ground of Old Trafford to top off an incredible weekend in Manchester.

Their faces spoke volumes. Wide eyes. Smiles. Laughs. Tears. It was obvious they were living a dream. No words required.

“I can’t describe it really,” said Haris as he stood on the pitch in the Theatre of Dreams. “This is a real dream for us.”

Haris and Team Red from the official Manchester United Greek Supports Club in Athens had just defeated Team Yellow from Singapore in the final match of the UNITED. DELIVERED. tour. After an action-packed weekend in Manchester, you could tell that he still couldn’t believe it. And he certainly had trouble describing his feelings.

“I didn’t realize what was happening,” he said. “I can’t describe it really.”

“Those are going to be stories and memories for a lifetime.“

This wasn’t Haris’ first trip to Old Trafford. He and fellow members of the Greek supports club travel regularly to Manchester to attend home games.

“But this is a totally different experience that can’t be lived by everyone. A totally once-in-a-lifetime opportunity for us.”

He said he’s sad to go, but already cherishing the moment.

“Those are going to be stories and memories for a lifetime,” he said. 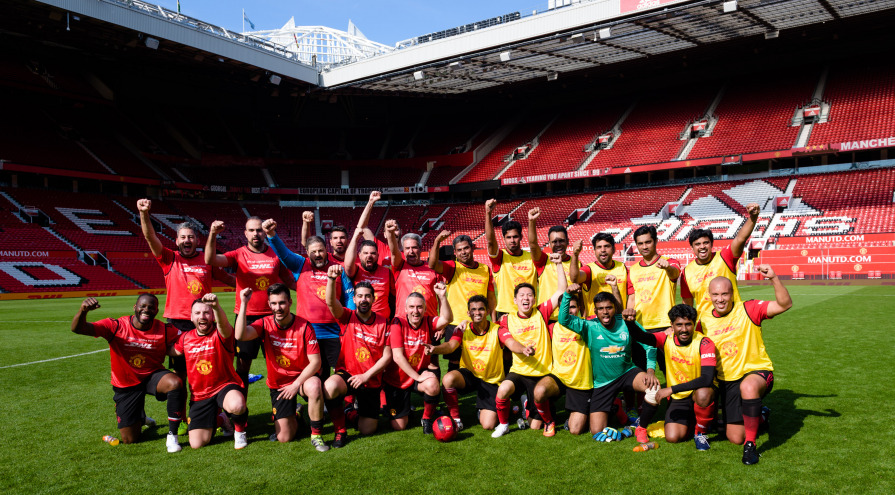 Although he was standing right outside Old Trafford ahead of Manchester United’s final match of the season, Salman can still hardly believe it. He remembered how he felt when he got the word that he had won.

“Absolutely buzzing! At first, I thought it was not real,” he said. “It took a little time for me to really understand that this was happening. But once it happened, it was actually awesome. And to see this thing in real has been a really great experience for me and my boys as well.”

“The boys didn’t believe me. Now they do.”

Salman had played his match in Singapore so many months ago, the fact that he still had a chance to win the trip to Old Trafford wasn’t even on his radar.

“I had completely forgotten that the end of the UNITED. DELIVERED. tour was a chance to win a trip to Old Trafford.”

His team had forgotten, too. And they initially thought Salman was pulling their legs.

“The boys didn’t believe me. Now they do,” Salman said with a huge smile.

Unlike Haris, this was Salman’s first trip to Old Trafford. The significance of the moment is unmistakable.

“It means the world to me,” he said. “After following Manchester United for so many years, to actually be here, right in front of Old Trafford, it’s amazing. There are no words to explain.” 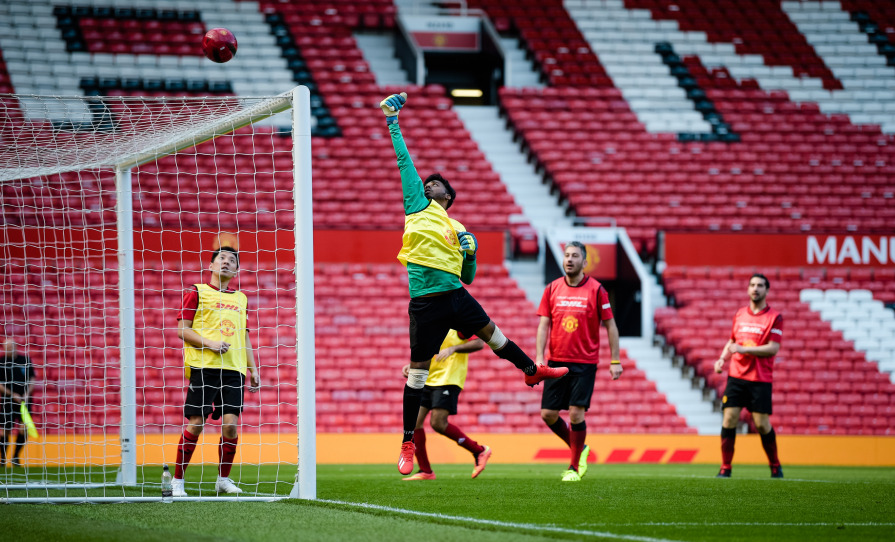 Memories for a lifetime

Haris, Salman and their teams got the ultimate VIP treatment over three action-packed days in Manchester, delivered by DHL.

The experience began on Saturday, May 11, when the two teams witnessed a historic moment: United Women capping a near-flawless first season and winning the FA Women’s Championship.

On Sunday, May 12, it was off to Old Trafford for the final match of the English Premier League season against Cardiff City. Though the Red Devils suffered a disappointing 2-0 loss to the Bluebirds, our teams enjoyed a remarkable end-of-the-season atmosphere as the fans thanked the boys for their efforts and the United stars thanked the fans for their support. At halftime, the two winning match hosts joined Alan Keegan – the voice of Old Trafford – out on the pitch for an interview to talk about their UNITED. DELIVERED. experiences.

Monday, May 13, marked the weekend’s pinnacle moment. After fine-tuning their skills in a training session run by Manchester United Soccer Schools at the state-of-the-art AON Training Complex, Team Red (Athens) lined up against Team Yellow (Singapore) on the pitch at Old Trafford, complete with sideline commentary from Keegan.

And just when they thought the day couldn’t get any better, the teams were met by United legends Louis Saha and Mikaël Silvestre, who joined them on the pitch as players and coaches. 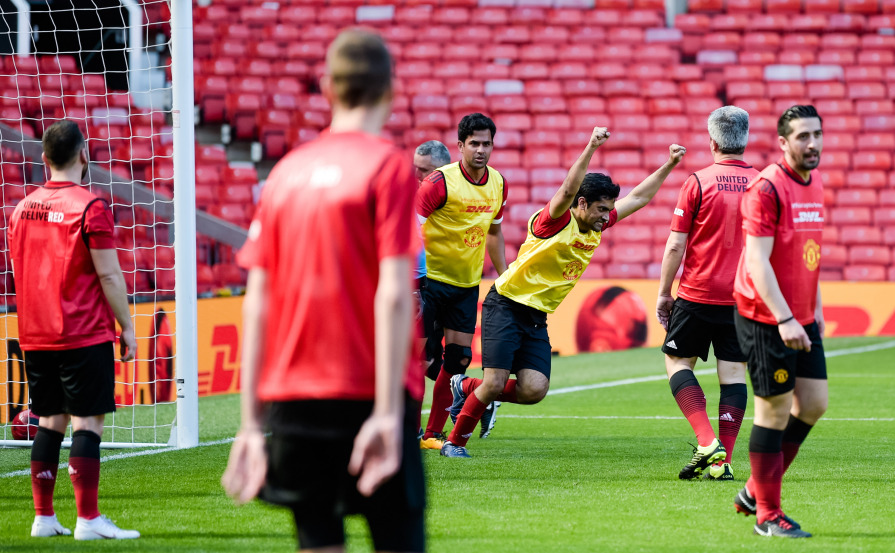 “The moment I entered the pitch, I didn’t realize what was happening,” Haris said. “Being in here where so many great players have played is beyond my craziest dream! It really feels awesome to have the stadium to ourselves.”

These feelings were shared by the players on both sides of the ball. Thanos, one of the key players for the Athens side, admitted he had shed tears.

“It’s an emotional moment. I pray not to burst into tears, like I did before.”

“You can’t imagine what this means to us,” he said. “I burst into tears a few minutes ago.”

Interviewed by Alan Keegan after the match, Thanos could hardly control his emotions. 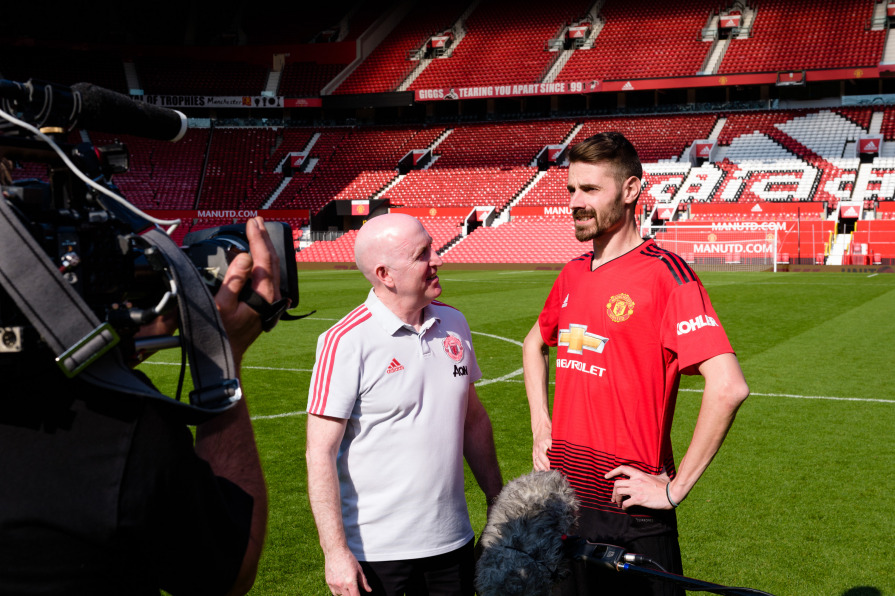 “It’s an emotional moment”, he said. “I pray not to burst into tears, like I did before.”

In the end, Team Red from Athens won the entertaining match 6-3, though Singapore showed true spirit in the second half, scoring two goals after being down 5-1.

“Greece is playing really well, I have to give it up for them,” said one of the Singapore players.

“The message was don’t give up, and they didn’t.”

At halftime, Silvestre, who coached and played with Team Yellow, encouraged them to keeping trying.

“The message was don’t give up, and they didn’t,” he said. “We finished with props.”

Team Red’s coach, Louis Saha, was keeping a close eye on developments in the second half.

“It was competitive, but in a good spirit.”

“I was a little worried,” he said. “I think we kept focus. I think the lads really enjoyed it. It was competitive, but in a good spirit.”

When all was said and done, Team Athens member, Thanos summed it up for Alan Keegan:

“It’s something memorable for us. We can’t forget it. This amazing feeling is going to continue to keep up with us in the whole life.”

The Tour will be back for the 2019/20 season – along with another chance win an ultimate prize. Stay tuned by following us on Twitter @DHLManUtd and Facebook!

UNITED. DELIVERED.: Winners ready for a trip of a lifetime