Every now and then a new fashion brand creeps into our consciousness, seemingly from nowhere but suddenly everywhere. You may have seen it in the window of a local designer boutique, or on the rails in a chic city department store – only to find a number of the sizes are sold out. You might have noticed it in the “what’s hot” pages of the glossy magazines, or noted the name when checking out the ‘best dressed’ celebrity pages. Perhaps you’ve found yourself clicking ‘like’ on a number of looks worn by social media influencers, only to discover they have all sourced their style from this hot new label. Rixo London is just that brand.

Founded just three years ago by London College of Fashion graduates Henrietta Rix and Orlagh McCloskey from their tiny shared flat in the English capital, Rixo is now stocked in over 40 countries around the world and is a firm favourite with A-list stars such as Lily James, Kylie Minogue and Sandra Bullock.

It is a modern fashion business phenomenon, and one that perfectly illustrates the power of the digital space when it comes to growing an international brand.

Featuring luxurious silk crepe de chines printed with flamboyant designs handpainted by Orlagh and Henrietta in their living room, their debut collection launched in September 2015 and was inspired by the silhouettes of some of their favourite vintage garments, made modern with pattern and colour. During their first two years of trading, the pair grew a healthy business, promoting their brand via instagram and contacting stylists, influencers and fashion editors via their social media accounts hoping they might help raise awareness of their fledgling label. Self-funded, they ploughed the proceeds of every sale back into buying fabric, contracting freelance pattern cutters to create the next collection.

“I grew up in Cheshire, where my dad had his own business as a used car dealer, and my four older brothers all went on to set up their own companies,” says Henrietta, now 26. “And Orlagh was raised in rural Northern Ireland, near Derry, where her father had a construction business, so we both came from families with a strong work ethic and an understanding of what it takes to run a company. We just always had the philosophy that it was do-able.”

Everyone said we were too young to start up on our own, but we had no responsibilities, no dependents, no big mortgages, and we were already used to living on very little.

“Everyone said we were too young to start up on our own, but we had no responsibilities, no dependents, no big mortgages, and we were already used to living on very little. I think our naivety helped us. We lived, ate, slept, breathed Rixo and worked 24/7 on it, so we weren’t going out and spending money socially.

Like many start-ups, in the early days, the founders did everything themselves, from designing, selling and invoicing, to PR, production management and packing orders. One of the key ‘lightbulb’ moments in their journey was when, both staggering under the weight of parcels of customers’ web orders as they walked to their local post office, they realised something had to change. It wasn’t the most efficient use of their time.

Making the transition to having a DHL driver collect parcels for despatch from their home office on a daily basis, giving Henrietta and Orlagh confidence that they could rely on an established, reliable and track-able global delivery network, meant their label was truly accessible to international customers. “The brand was suddenly available to buy from virtually anywhere on earth,” recalls Orlagh, 29. “That was really exciting and meant we could market confidently on social media, knowing anyone who wanted to order from us could do so, wherever they lived.” 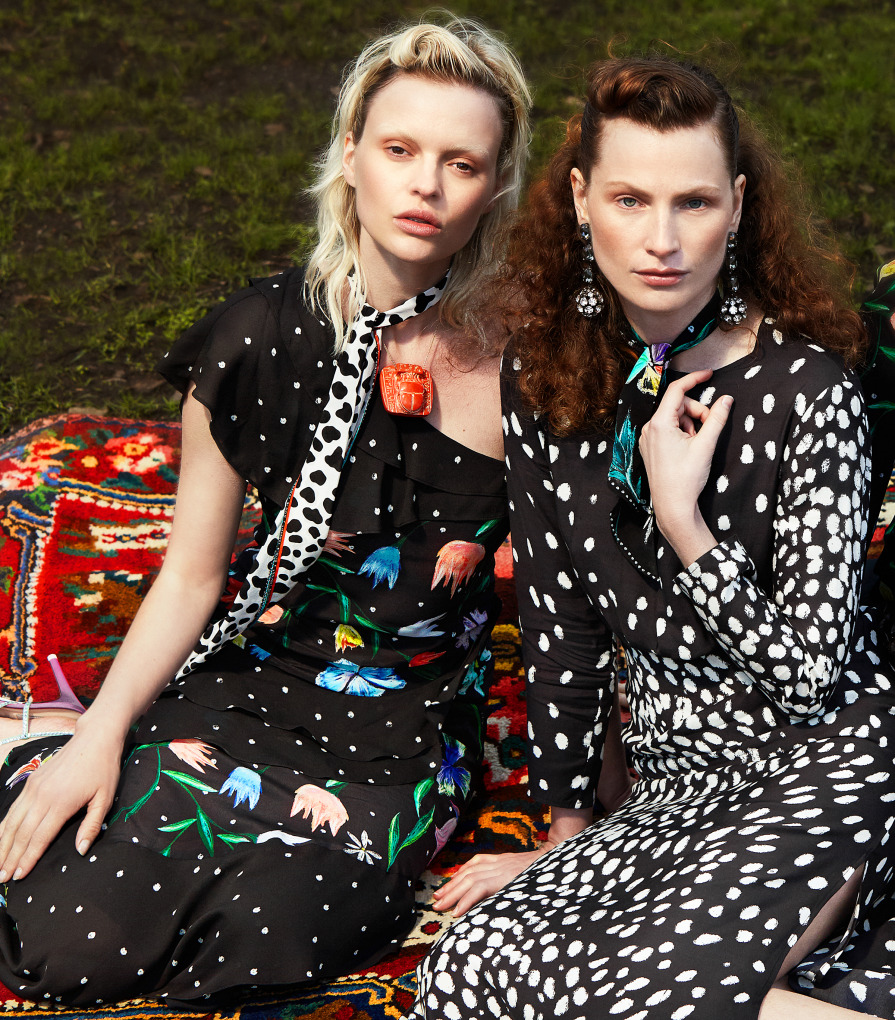 A year ago, the pair won the inaugural DHL Award for Fashion Potential, in partnership with the British Fashion Council, which saw them benefit from industry mentoring and logistics advice, plus a £20,000 award to support their international growth. This enabled the fledgling brand to recruit a digital specialist to facilitate a global e-commerce push and as a result, Rixo has grown exponentially over the last 12 months, expanding from a team of three to a full-time team of 12. International web sales have grown 350 per cent on the previous year, and the business has moved from the girls’ flat to a dedicated new office and studio space.

The range has grown to a seasonal collection of 60 or so pieces, still featuring their signature prints, handpainted in London, now printed on silks in Italy and China, and made up into garments in China for distribution all over the world. Rixo now boasts an impressive roll-call of over 100 stockists around the globe, including net-a-porter, Liberty, Harrods and Selfridges in London, Saks in the US, Dublin’s Brown Thomas, Le Bon Marche in Paris, Luisa Via Roma in Italy, Australia’s David Jones and Takashimaya in Japan, amongst others.

We’ve made lots of mistakes along the way, but we wouldn’t change that for the world because we’ve learned lessons and it’s shaped how we do things now

The pair continue to use social media to increase awareness of Rixo, with 120k followers on Instagram, many of whom actively share images of themselves in the label’s designs. “We often wonder how we would have fared without Instagram. It allows us to talk with customers and press directly and engage with them,” says Henrietta, fresh from staging their first catwalk show as part of London Fashion Week. “It’s really important that our clothes are seen on a variety of women, and people can relate to that. We have customers in their teens right through to women in their eighties, of all different shapes and sizes, wearing our clothes as everyday wear or for special occasions, styling things simply or in a more avant-garde fashion. It gives other women the confidence to try new looks and to believe they can wear styles they might previously only have seen on a size zero model in a fashion magazine.”

“We’ve made lots of mistakes along the way, but we wouldn’t change that for the world because we’ve learned lessons and it’s shaped how we do things now,” comments Henrietta. We have big plans for Rixo, and we’re often asked when we will raise finance and take outside investment, but we want to stay in control and invest everything back in the business so we can grow. We plan on launching knitwear, accessories and to add to the collection in other ways, with different styles to suit different body shapes and more embellishment, but the silk printed dresses will always be the heart of what we do…”

MBFWA 2018: Unique fashion dreamscapes and 2019 resort collections from Down Under

Fashion technology and innovation shape the future of fashion

A Runway of Red & Yellow: "Fashion meets Logistics" at the DHL Cargo Hub in Leipzig