The 2019 FIA WEC gets underway with the 1000 Miles of Sebring. In our Super Sebring Diary, we will be bringing an exclusive glimpse behind the scenes and insights into the organization of the weekend.

The Race after the Race

Congratulations to Fernando Alonso/Sebastien Buemi/Kazuki Nakajima and Toyota on winning the 1000 miles of Sebring!

But it’s not over yet by a long chalk for the WEC at the Sebring International Raceway. After the first race of the year, the teams must get everything carefully and securely packed away ready to leave – the race after the race!

Work began just after the end of the event. Teams now have until Sunday evening to load their racing cars and equipment into the 70 containers already in place at Sebring. DHL’s crew will then head to the track to begin departure.

Toyota will be starting the 1000 Miles of Sebring from pole position. Fernando Alonso completed a qualifying lap in just 1:40.124 minutes to set a new record. The ex-Formula 1 driver beat the previous track record set in 2013 by an impressive 3.7 seconds.

“It’s great to have the new qualifying record here at Sebring,” said Alonso. “It felt good to get a lap with low fuel and new tires; I enjoyed it a lot. At night, this circuit is very challenging, as it’s not easy to see all the reference points, but I had a good lap. I thought a 1min 39secs lap might be possible, but I lost a couple of tenths here and there so didn’t quite make it.”

Alonso and his team-mates Sebastien Buemi and Kazuki Nakajima will line up first on the grid for the race. P2 went to the second Toyota driven by Mike Conway, Kamui Kobayashi and Jose Maria Lopez. In third place will be the Rebellion of Nathanaël Berthon, Thomas Laurent and Gustavo Menezes. 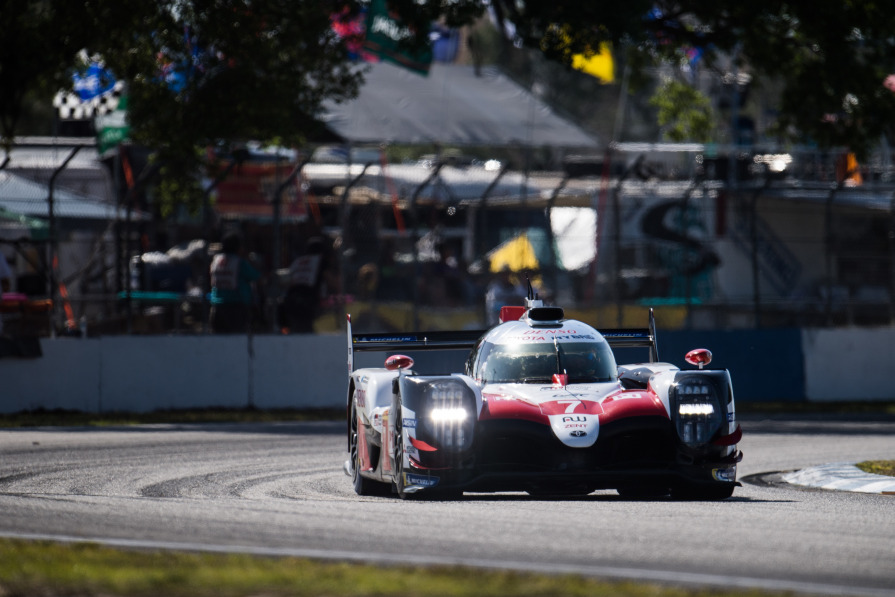 Porsche wings its way to USA

Mission accomplished! Project 1 Porsche makes it to Sebring in time for scrutineering. What an impressive performance by everyone involved in such a short space of time! We’ve got exclusive pictures for you of the 911’s arrival at the airport in Atlanta. So much action even before first practice has got underway – it’s going to be an exciting race weekend here in Sebring!

Project 1 team owner Hans-Bernd Kamps to DHL-InMotion: “Many thanks to DHL and Porsche. They did an awesome job! Time was short, but I never doubted that we would make it in time for the race, because we know just what our partners can do. We’ve worked with DHL for more than 20 years now and know that they can move mountains if necessary. We would also like to really thank the teams that gave us their support. Things would never have worked out but for them. It’s refreshing to see that people in motor racing are still always ready to lend a hand!”

In motor racing perhaps more than any other sport, rapid solutions are often required. And this once again proved to be the case in the run-up to the WEC race weekend at Sebring. During a test drive on Sunday – four days before the first free practice session – the Porsche 911 RSR of Team Project 1 had an accident. The car caught fire, and there was not enough time to get it repaired before the big event.

The immense expertise of the DHL logistics experts was called for. The DHL team in Sebring instantly sprang into action, organizing the transport of a replacement vehicle from Germany to Sebring.

“We had less than ten hours to implement a solution and got working on it immediately,” says Robin Valentino Mack, DHL Motorsport Logistics & Events Specialist. “In collaboration with Porsche, we had the car prepared and at the same time took care of customs clearance so that it could be exported to the USA.”

A perfectly executed job that went totally to plan: on Tuesday at 15:20 local time, a Lufthansa plane with the Porsche 911 on board took off from Frankfurt bound for Atlanta.

In the meantime, the DHL team were busy organizing various other important processes. On Tuesday evening at the airport in Atlanta, a car transporter with two drivers was waiting for the valuable cargo, ready to deliver it safely and in good time to the Sebring International Raceway.

“We organized a lot of things directly from Sebring and kept in touch with the team to keep them updated and make sure everything went smoothly,” explains Robin Valentino Mack.

And thanks to the rapid turnaround, the experts from DHL team have made a major contribution to Team Project 1 managing to compete at Sebring despite the misfortune they suffered earlier in the week.

For the first time in the history of the WEC, racing will take place on a Friday. Here, too, logistics plays an important role. When thousands of spectators travel to the racetrack for the Super Sebring weekend from tomorrow, everything has to be completely in place. It would be virtually impossible to maneuver heavy containers or bulky equipment through the masses of fans. The DHL team has had to take this factor into account in its extensive planning.

The timetable for the Sebring 1,000-mile race:

DHL delivered the last batch of racing cars to Sebring in time for the test sessions scheduled for the weekend before the big race itself. On the first of the two test days, the fans got a foretaste of the action to come in the 1,000-mile race. Mike Conway in the number 7 Toyota TS050 clocked a lap time of 1:41.211 minutes, beating the previous track record by a full 2.7 seconds!

Looking back: The first WEC race at Sebring in 2012

From Hong Kong to Sebring

Endurance racing legend Allan McNish has been named as Grand Marshal for both the 1000 Miles of Sebring and the 67th Mobil 1 Twelve Hours of Sebring Presented by Advance Auto Parts. The 2013 World Champion is a four-time winner of the Twelve Hours of Sebring (2004, 2006, 2009 and 2012) and knows better than most what is required of drivers at this most challenging of sportscar classics.  His last victory at Sebring was on the occasion of the WEC’s first ever race on March 18, 2012.

On the weekend before, Allan will be in Hong Kong for the Formula E race weekend as team principal of Audi Sport ABT Schaeffler. Did you know that DHL is the Official Founding and Logistics Partner of Formula E?

What actually goes into the DHL containers?

70 containers full of valuable cargo have found their way to Sebring. But what does each of these approximately twelve-meter-long boxes weighing around 20 tons contain? First and foremost, of course, the star attractions of the racetrack, namely the spectacular cars belonging to the WEC teams. In addition, there are spare parts, team equipment for the pit lane, TV equipment, pace and safety cars, office supplies and multiple coffee machines, considered a vital accessory. 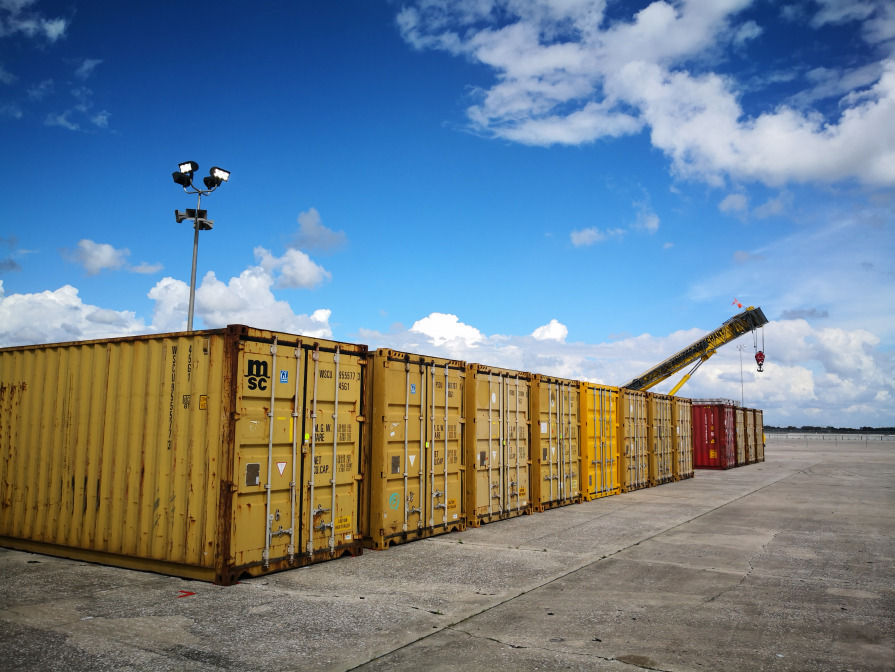 Just two weeks before the race on 15th March, the DHL team on site were called on to perform the so-called grounding process. This involves parking all containers at the precise position in the paddock measured out in advance. What is meant by the term "precise" in this context is explained by Robin Valentino Mack, DHL Motorsport Logistics & Events Specialist: "The containers must be positioned level on the ground at a distance of only 40 cm from each other. That's so that the doors can be opened without a hitch." Windy and rainy conditions during the grounding process created an additional challenge that the DHL team nonetheless overcame in their usual professional manner.

The Sebring International Raceway is a highly individual track in a number of ways. Unlike most of the other racetracks on the WEC itinerary, the Sebring paddock does not have permanent garages or facilities.

"With our freight delivery, we are actually helping to design the paddock," explains Robin Valentino Mack, DHL Motorsport Logistics & Events Specialist. The WEC paddock in Sebring is 200 meters in length and around 50 meters wide, which calls for high-precision work.

So what does the job really involve?

Open the container, wheel the car in and away you go? Hardly! There is so much more to the logistics behind the WEC. As the official logistics partner of the WEC series, DHL is responsible for the transportation of the entire motor racing equipment for all the teams to the various venues around the world.

For each race weekend, this means 34 racing cars, two safety cars, TV technology and various other technical equipment, 10,000 tires, 198,000 liters of fuel and everything else that is essential to the correct functioning of the race.

In addition, DHL takes care of all logistics processes, from the organization and booking of aircraft, ships and trucks to the handling of the requisite certification and shipping documents as well as the coordination of all last-minute deliveries to the race venues. DHL and WEC will be continuing their long-standing partnership in the 2019/20 season.

From Shanghai to Sebring

The journey to the Super Sebring began last year in China. On 18th November 2018, the 34 racing cars in the WEC starting line-up contested the six-hour race in Shanghai. After the checkered flag had fallen, the DHL logistics experts got to work on meticulously organizing the long journey to the USA.

With a view to sustainability and cost efficiency, the race cars and the necessary equipment took the sea route to Sebring. A total of 70 containers left Shanghai on the long journey.

Most of the valuable cargo arrived safely in the USA on 26th December 2018 and continued on its way to Sebring. In parallel, the DHL team were delivering twelve containers to Antwerp. The purpose of this diversion agreed in advance was to give the teams the opportunity to perform further work on their cars and equipment.

An Event of Superlatives: Super Sebring

It's Super Sebring time! The famous Sebring International Raceway will be hosting the FIA ​​WEC on the weekend of 13th - 15th March, the first time the series has been back there since 2012. For the fans, it means a double bill of racing action, because in addition to the World Endurance Championship, the IMSA WeatherTech SportsCar Championship will also be contested on the famous Florida circuit.

Thorough preparation for the "Event of Superlatives" is the key to success. In our Super Sebring delivered by DHL Diary, we will be bringing an exclusive glimpse behind the scenes and insights into the organization of the weekend.