Ron and James have finished their first month – watch all the best bits and read what they had to say about it.

Can you describe an epic bike tour in one word? Probably not, but we’ll try anyway: phenomenal.

After riding across most of continental Europe this past month, we caught up with Ron and James to talk about their experience and splice together a highlight reel from some amazing GoPro footage. As we talked, the word "phenomenal" sprang to mind. Phenomenal sights and sounds, phenomenal people and places, phenomenal weather…and phenomenal willpower.

But let’s let Ron and James tell the story.

Highs and lows
James: I don’t know where to begin. So many highs. Being surrounded by family, friends and everyone who has made Race to RWC possible really made Day 1 from Twickenham to Canterbury pretty special and I couldn’t have imagined a better way to start the adventure.  Also, the welcome Ron and I have received into each and every DHL office across Europe has felt like something straight out of a movie. I’ve loved being able to share the adventure with cool people who are genuinely interested in the ride and the work being done by ChildFund Pass It Back. Adventures are always so much better when shared! Overcoming my knee injury and beginning to feel more at home on two wheels was another high. It has made for a dreamy last few days of February through Eastern Europe! I’ve enjoyed being able to lift my head up more and take in the stunning views of Hungary, Romania and Serbia as the body adapted.

“Adventures are always so much better when shared!”

A knee injury after two days on the bike made for a ropey start for me – definitely the lowest point on the trip so far. And now, upon reflection, not being able to be as present as I would have liked to be over the first few days as I pushed through my knee issues and didn’t take enough time to relax and enjoy life on the bike. I also had a good crack at turning cycling into a contact sport and rugby tackled the road a couple of times over the first week, but fortunately the road came off worse. 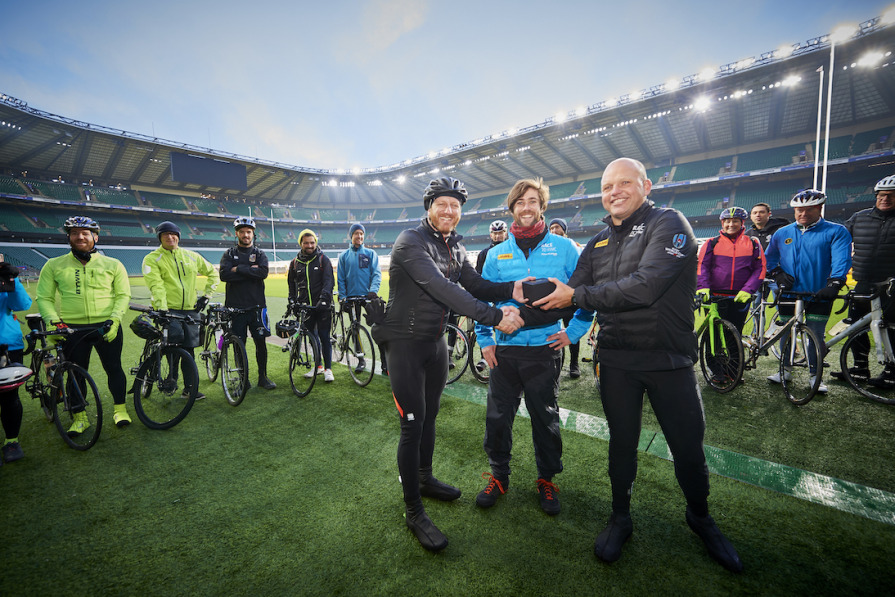 Ron: For me a highlight was definitely the first few pedal strokes away from Twickenham Stadium. It was the culmination of months of planning shared with so many close friends, family, and stakeholders. A close second is the smile and welcome we received from the border guard at the Romanian border – our first non-Schengen country. It summed up so much of the goodness and warmth we've been on the receiving end of. James’ knee recovering is up there, too. That’s when I knew I was on the expedition with the right man – tough as nails, no complaining. And the arrival in Bonn at DHL HQ was beyond surreal. Having the bosses of all three of our key stakeholders – DHL, World Rugby, and ChildFund Pass It Back – in one place was very humbling to say the least.

“It summed up so much of the goodness and warmth we've been on the receiving end of.”

My concern for James’s knee on day 1 and 2 was a low. I was worried about the possible implications for the whole expedition. One of two stretches of extreme cold certainly got me thinking as well – perhaps we hadn't prepared well enough for that. Coming into Bulgaria, I got sick (a head cold). I felt like rubbish. And despite the day off, we had lots of obligations and things to do that day, that I had no energy for.

Favorite country
James: It’s crazy to think that we’ve crossed nearly the whole European continent in the month of February. Having not travelled extensively in Europe, every country has been new and interesting for me. I would have to say the dark horse was Serbia, with some incredible mountains and interesting towns making for a great time out on the bike.

Biggest surprise
James: The biggest surprise of February was how good the weather has been. Setting off from London with visions of daily battles against freezing snowstorms, winter cycling has turned out to be somewhat of a non-event! Aside from a few chilly days, we’ve been cruising in sun and blue skies, enjoying an early spring.

Ron: The beauty of Serbia. Had no idea. And how overwhelming the welcomes we have had at the DHL offices – surprised how moved I have been at feeling part of something very special. 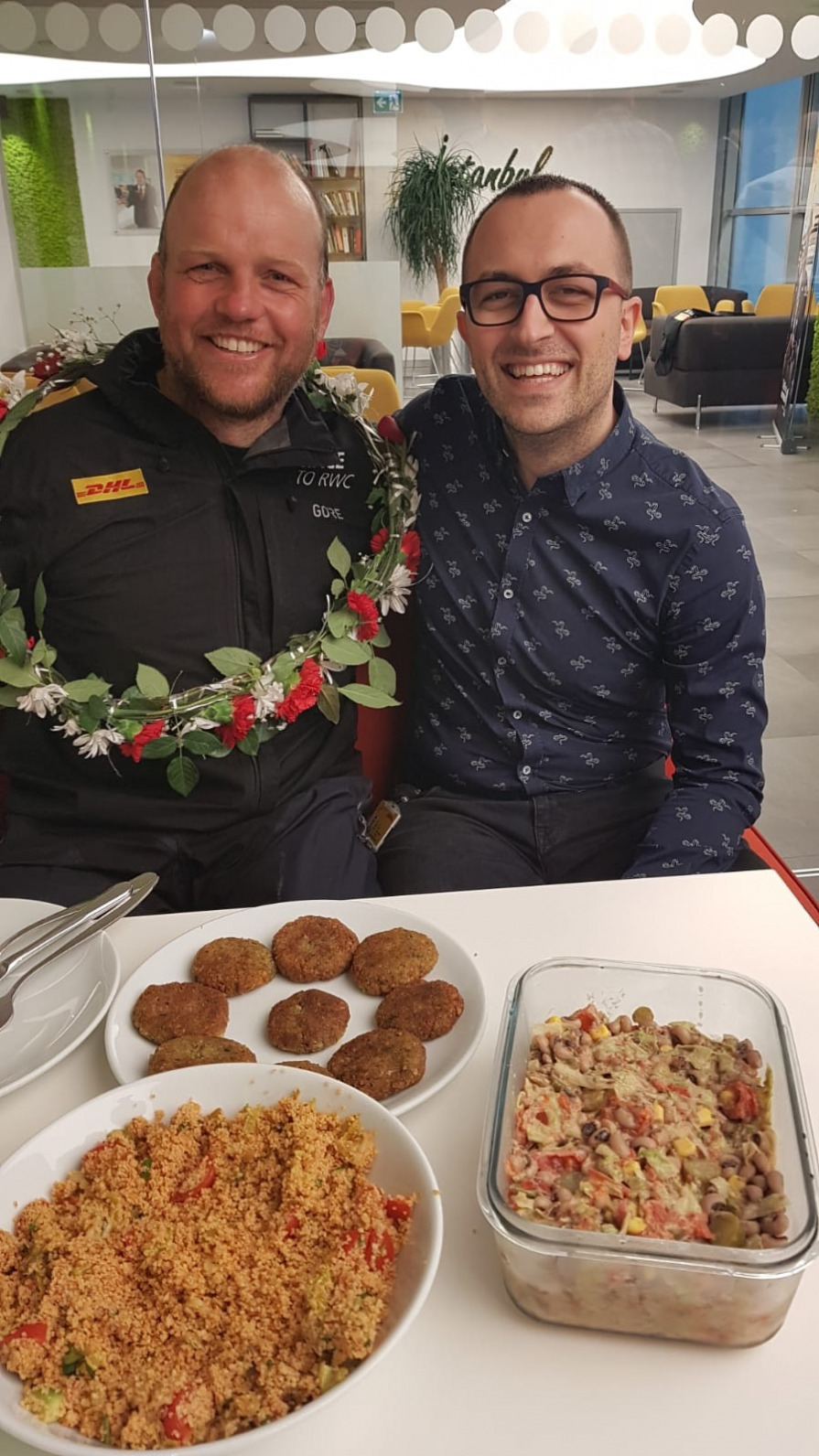 Ron: Three times, all early on, and fortunately very minor!

Conditioning
James: The first week was rough on the body, which for some reason wasn’t a fan of increasing my cycling load from zero to 100-140 kilometers a day! A previous knee injury took the majority of the beating and caused a few issues, but fortunately I have two legs so was able to pedal with the other one to take some of the slack. The human body is a pretty incredible machine and thankfully mine has been able to adapt fairly quickly so we’re back in business and feeling good on the bike!

Ron: Seemed to have adapted very well to the long days in the saddle – certainly fatigued as we reached Bulgaria after a very hard start, and some slightly concerning ankle issues from time to time, but on the whole, getting fitter and stronger, and quietly confident, with continued care and self-management, that the body might just hold out!

Favorite/Least favorite meals
James: There is no such thing as bad calories on a bike, so I have been enjoying eating everything and anything! One of the best meals was an amazing dinner with the DHL team in Bratislava, with great food and even better company.  We’ve managed to eat pretty well through Europe so no really bad meals that spring to mind. My least favorite was likely in Serbia, with what I can only imagine was supposed to be rice fried with some with some form of unspecified meat. To be fair, it did the job and got me home on the bike!

“It was quite disgusting and disappointing to say the least.”

Ron: By far the vegan pizza at Mama Rosso’s in Pirot, Serbia – unbelievable! Worst meal was canned hummus from a supermarket in Serbia, too. It was quite disgusting and disappointing to say the least. 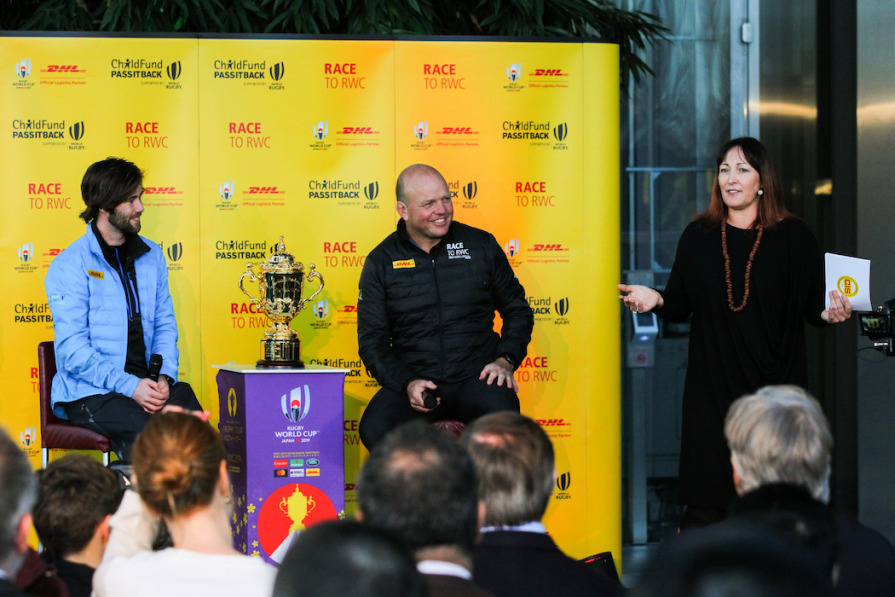 Most unglamorous moment
James: We have all experienced needing the toilet and holding it in as we make a last-minute dash in the car to the nearest petrol station. It turns out it’s even harder to hold it in on a bike as you’re bouncing over cobblestones in Vienna...let’s just leave it there!

Ron: On stage at DHL HQ in Bonn in five-day-old, unwashed lycra!

Funniest thing your partner did?
James: Aside from the terrible puns, I think watching Ron convince random people to take part in our daily rugby ball pass has probably got the biggest laugh out of me. His persistence to fight an uphill battle in getting an old man on rollerblades to take part was priceless and ended up being a massive win.

Ron: A very unflattering slow-motion tumble trying to reverse out of a dead-end lane – you had to be there!

Most annoying thing about your partner?
James: I think I’ve monopolized the annoying market, but Ron probably edges it in the snoring department.

“I think I’ve monopolized the annoying market, but Ron probably edges it in the snoring department.”

Ron: His lack of urgency at getting going in the morning.

Follow and join!
Ron and James are already Turkey, pedaling some 1,200 kilometers across the vast expanse of this transcontinental land.

You can join them at any time – they’d love the company! Follow their progress here on DHL InMotion, where you’ll also find regular updates, photos and messages from Ron and James as they pedal their way to Rugby World Cup 2019™. Follow Ron on Twitter and Instagram and reach out to him to find out where they’ll be next!