Ron and James finished their first leg from London to DHL headquarters in Bonn. Emotions were on high as they finally kicked off after months of planning.

To complete a challenge like this, you can’t just hop on your bike and start pedaling, regardless of your experience or athleticism. It takes months of planning and preparation. Ron Rutland should know. He cycled through every country in Africa and most of Europe for two-and-a-half years on his way to the Rugby World Cup 2015™ in London. He also knows what it feels like to finally get on the road.

“Eventually you get to the point where you just want to get going,” he said on stage, standing next to World Rugby’s biggest prize – the Webb Ellis Cup – and in front of a crowd of rugby fans and DHL staffers at the company’s headquarters in Bonn, Germany. “It’s like the feeling before a big rugby match. Butterflies in your stomach. You just want to get out there and have a kick off.”

“Eventually you get to the point where you just want to get going.”

Ron and James have planned a fairly ambitious schedule in order to arrive in Tokyo in time for the opening match of Ruby World Cup 2019TM on September 20. They need to average about 600 kilometers a week to make the 20,000+ kilometers in 231 days. The plan is to ride six days a week. That’s an average of 100 kilometers a day for nearly eight months.

Between London and Bonn, the duo did their weekly goal in five days!

“We had a really aggressive schedule to get here today,” said Ron in Bonn. “The first day was the hardest day so far.” 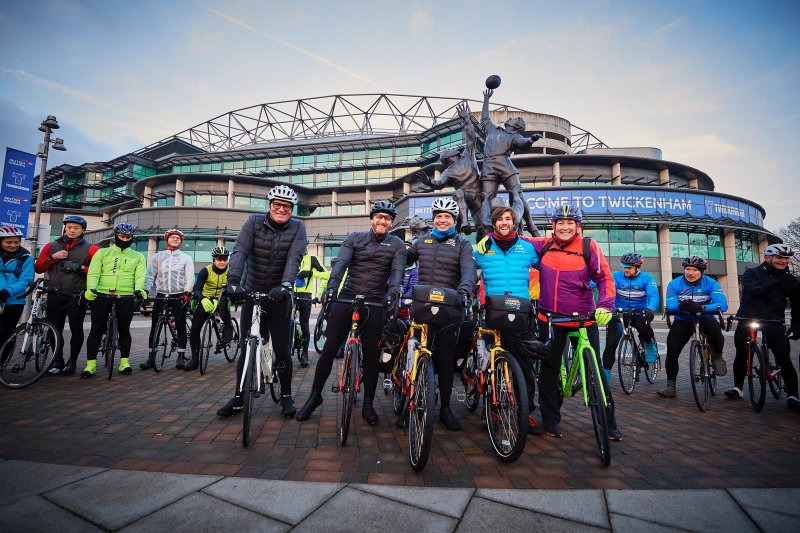 Stage 1 – the ride from Twickenham Stadium to Canterbury – stretched over 136 kilometers. Luckily they had an entourage of family, friends and rugby fans for moral support. After departing London on a beautiful winter morning, the long ride turned cold and wet. The physically exhausted yet emotionally energized group arrived at the Canterbury Rugby Club in the cover of darkness.

“The high fives and hugs at the end really was the realization that we’d all done something really special,” said Ron. 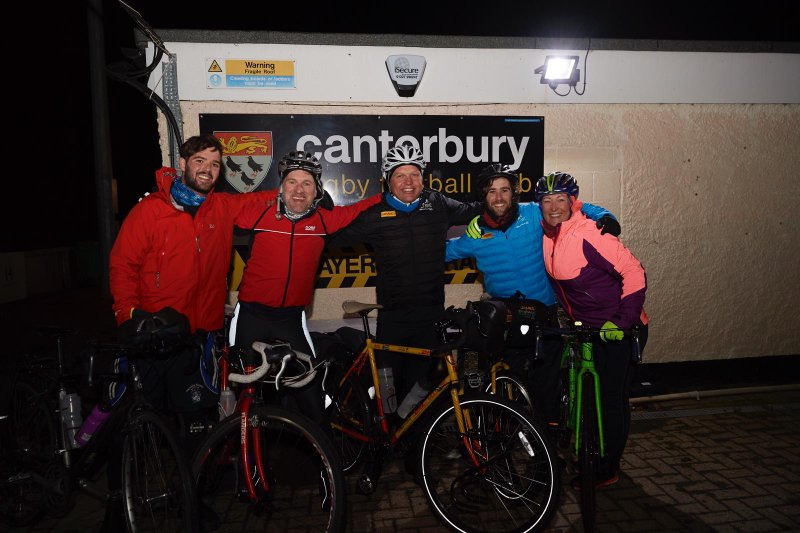 And let's not forget something else that's special: their special cargo. Ron and James are carrying the official match whistle for the opening Rugby World Cup 2019™ match between Japan and Russia. It was presented to them next to the pitch by Alan Gilpin, Head of Rugby World Cup. 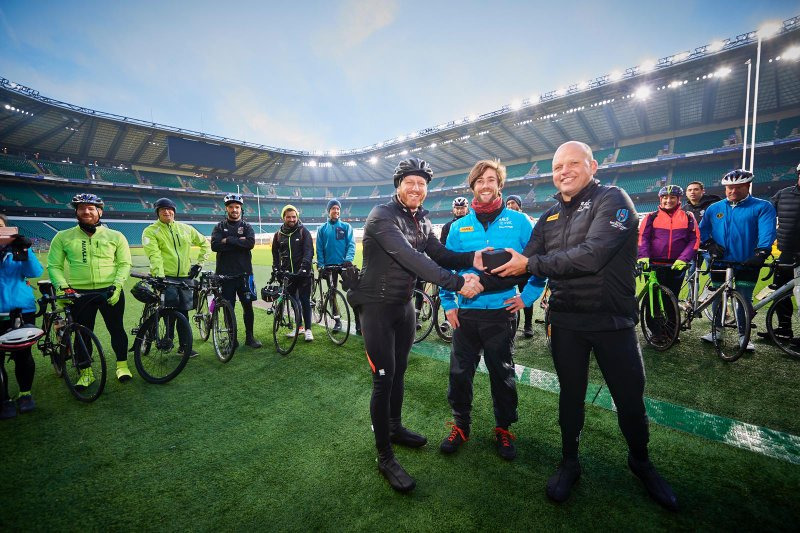 “It’s probably the slowest delivery in DHL history,” said Ron. “But it will be on time!”

The support
Ron and James will have to pedal every single one of the 20,000+ kilometers to Tokyo themselves, but they’re not doing it alone. Along with riders, who sieze the chance to join them on certain stretches throughout the journey, DHL will be driving the proverbial support vehicle every step of the way. 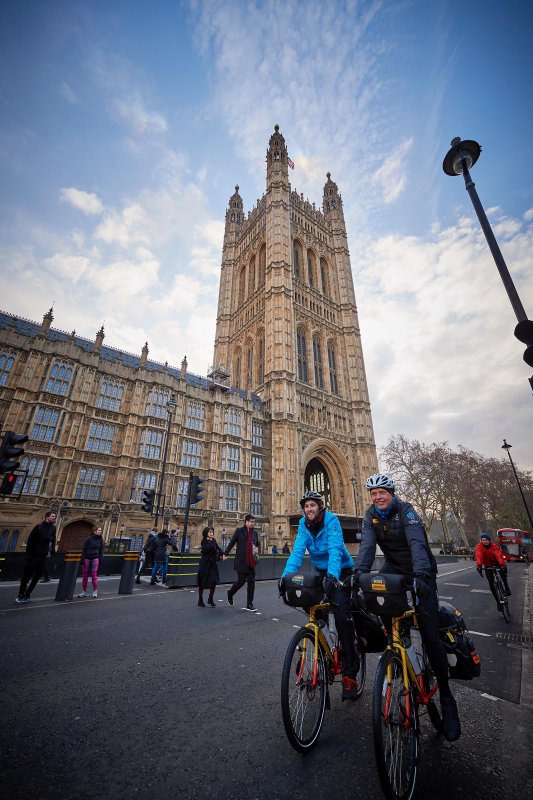 “We will be behind them for every kilometer,” said DHL’s Fiona Taag, who joined Ron and James on day 1. “And we’ll even have some of our staff cycle alongside them on occasion.”

“We will be behind them for every kilometer.”

How exactly is the world’s leading logistics company supporting? One word: logistics. Not only is DHL shipping gear and other supplies to strategic locations along the route, DHL staff in the countries they’ll be travelling through provided lots of advice that ultimately helped Ron and James map it.

“I was on the phone and writing emails with DHL colleagues from China, Myanmar, Iran, and Pakistan – literally planning what border crossings to take and what was the best time of day.”

There’s a reason Ron turned to DHL to support his next crazy adventure. With its huge footprint on the African continent, the company played a pivotal role in his maiden voyage.

“If it wasn’t for DHL, I’d probably still be in Ethiopia.”

“It literally started with a handshake,” said Ron. “To help me get my passports around Africa for my visas. If it wasn’t for DHL, I’d probably still be in Ethiopia.”

The passion
On stage in Bonn, James Owens radiates the same passion as his partner – he’s been smiling ear-to-ear since the two rode up to the 40-story Post Tower, DHL headquarters and the city’s most visible landmark on the west bank of the Rhine River. 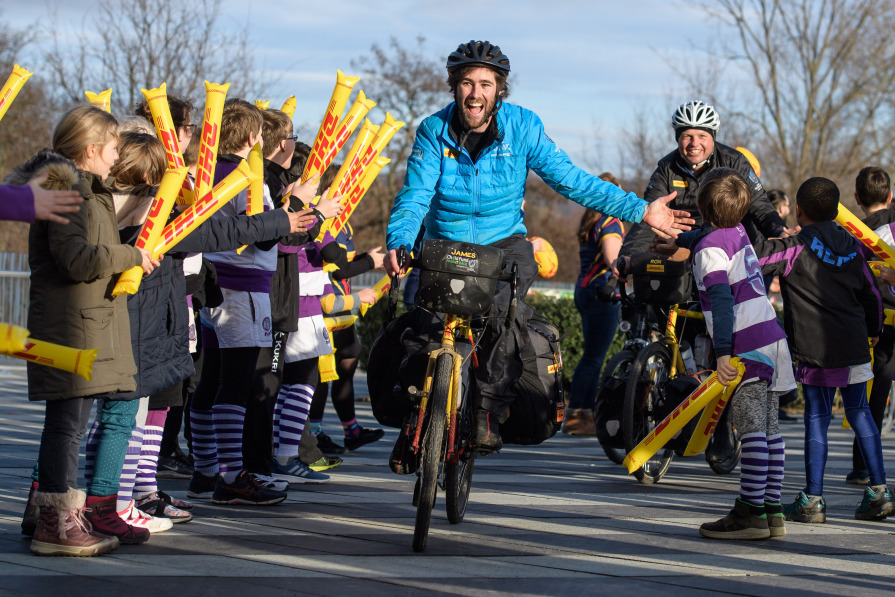 “You wouldn’t cycle 20,000 kilometers for something you weren’t passionate about,” he said.

“My parents have been telling me since I was little: ‘Do one thing every day that scares you.’”

The first thing he admits is that he’s not a cyclist. In fact, before October 2018, he hadn’t even been on a bike in years. So why’s he doing it? The answer is twofold.

“My parents have been telling me since I was little: ‘Do one thing every day that scares you.’ And cycling to Tokyo is absolutely terrifying, so I thought why not!”

“You wouldn’t cycle 20,000 kilometers for something you weren’t passionate about.”

But more importantly, they’re doing it to support ChildFund Pass It Back, an innovative program led by ChildFund in partnership with World Rugby, Asia Rugby and Women Win. James has been working for the program since its beginnings in Vietnam several years ago. 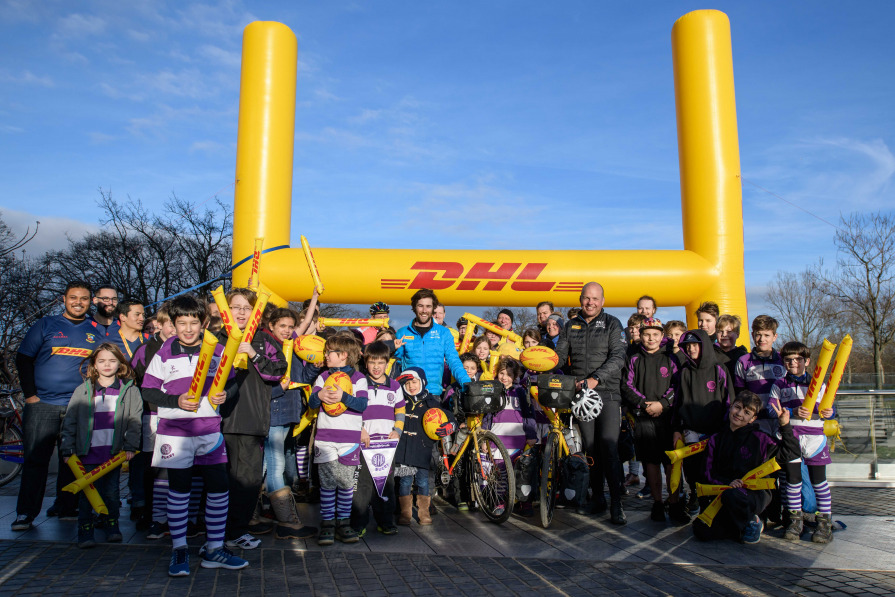 “Seeing the impact on a daily basis, and seeing the personal stories up close, it’s something I really believe in.” said James. “Rugby is a great sport with a core set of values that I think we can all identify with.”

Based on utilizing sport for development, ChildFund Pass It Back delivers an integrated life skills and rugby curriculum for children and young people in disadvantaged communities across Asia. The program uses tag rugby to teach children and young people a range of valuable life skills, which equips them to overcome challenges, inspire positive social change and “pass it back” to their communities.

One unique aspect of rugby, which ChildFund Pass It Back uses to its advantage, is that it can reach communities that many sports can’t.

“If you bring a funny, egg-shaped ball that no one has seen before, then it’s a real leveller.”

"Football is a boys’ game in Laos, for example,” said James. “If you show up with a football and try to get girls to play, you’ll struggle. But if you bring a funny, egg-shaped ball that no one has seen before, then it’s a real leveller. Anyone can pick it up and run with it.”

James says the results speak for themselves: the vast majority of coaches and players had never seen or engaged with the sport before joining the program.

Some of these coaches are actually joining James along the way. Each day, he places a photo of one of them in a makeshift frame attached to the hub of his front wheel.

“I’ve been fortunate enough to have this opportunity, it’s the coaches and the children in the program who are putting in the hard work every day to make ChildFund Pass It Back tick and to deliver the change we are seeing in these communities,” said James. “So I thought what better way to give back to them but to have a coach ride with me every day. These pictures are just a small reminder to myself – they are the inspiring coaches who inspire me.”

Follow and join!
Ron and James are already over halfway across Germany, pedalling along the Danube River on their way to Vienna by the end of the week.

You can join them at any time – they’d love the company! Follow their progress here on DHL InMotion, where you’ll also find regular updates, photos and messages from Ron and James as they pedal their way to Rugby World Cup 2019™. Follow Ron on Twitter and Instagram and reach out to him to find out where they’ll be next!