I guess you could say the number five is now the USA’s lucky number. After four consecutive Cup final appearances, and four consecutive losses, coach Mike Friday’s impressively consistent outfit found themselves in yet another Cup final, this time on coveted home soil. Willed on by a packed house, they ultimately showed their best side, easing past Samoa 27-0 for their first win in five showings. The victory not only meant retaining the title that they won in Las Vegas 12 months ago, it also placed them at the top of the table as outright leaders of the HSBC World Rugby Sevens Series 2019. Read more about the historic win and “three scintillating days of action at Sam Boyd Stadium” here. 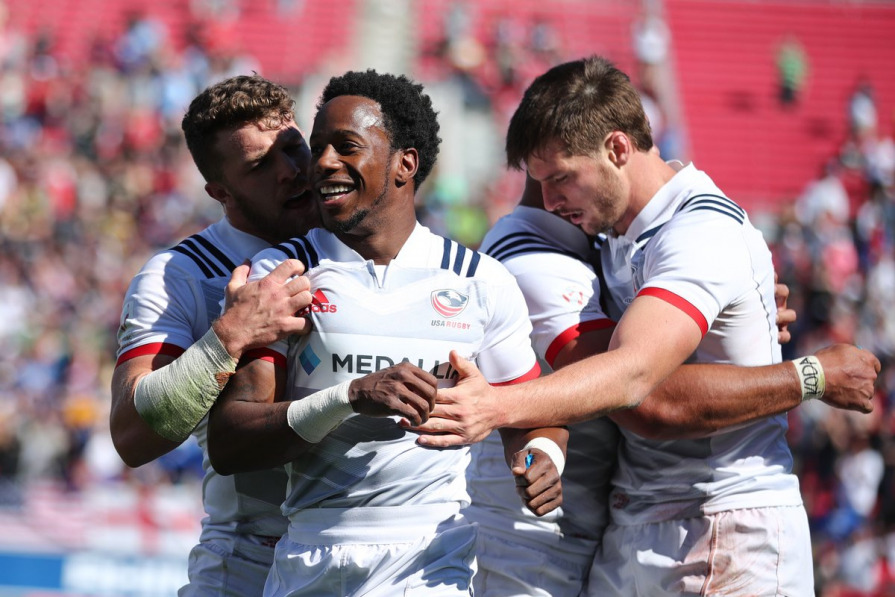 But while the Eagles stole the show, thriving on fervent home support, a cagy veteran from neighboring Canada was quietly making quite an impact on his team’s performance.

Connor carries
While in Las Vegas his team was reminded time and again that Rugby sevens is a game of fine margins, Canada’s Connor Braid repeatedly delivered outside the margins. A versatile player who excels all over the field, he certainly got carried away at the 2019 USA Sevens. Although Team Canada went out in the Challenge Trophy Quarter Finals, Braid still managed a superb 33 carries, joined only by the likes of Scotland’s Max McFarland. With 11 tackles, 3 offloads, and 2 breaks, Braid put up 47 points on the DHL Performance Tracker to win the DHL Impact Player Award of the tournament. 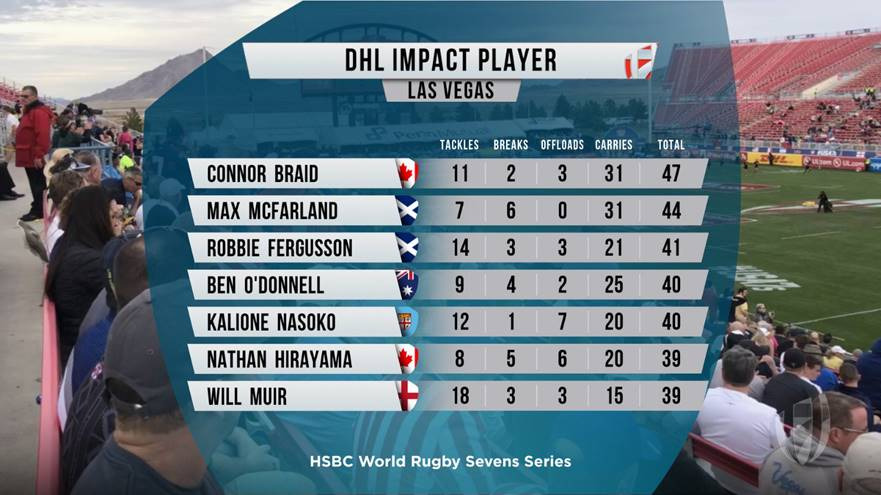 A Scottish one-two with Max McFarland and Robbie Ferguson trailed Braid by three and six points, respectively. In addition to his 31 carries, McFarland produced six breaks, while Ferguson made an impressive 14 tackles.

Mr. Consistent, Sione Molia, still leads the way with 178 points, but only by the slimmest of margins. Braid’s 47 points in Vegas shot him to 177 and second place. Fiji’s Kalione Nasoko and Vilimoni Botitu are in 3rd and 4th place with 174 and 168 points, respectively. 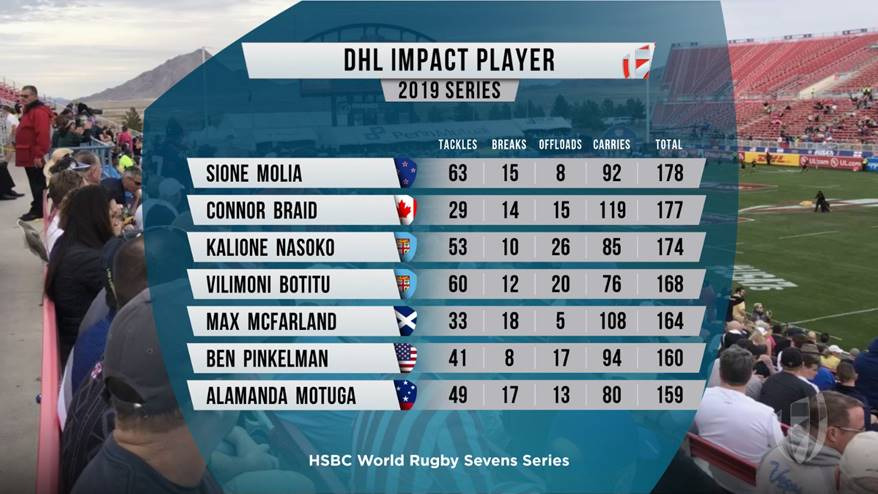 With such an extremely tight race, there’s no telling who will be on top after the 2019 Canada Sevens. Canada 7s. The stage is set!

USA the team to beat
Now the outright leaders of the HSBC World Rugby Sevens Series 2019, USA is certainly the team to beat – no, keep out of the final! With five consecutive trips to the final, the Eagles are riding a home-win high that is sure to spill over the border. They find themselves in a fantastic position, five points ahead of New Zealand and 14 points ahead of Fiji, who will be looking to regain their form after a disappointing 6th place finish (by their lofty standards, of course!). It’s lining up to be an exciting three-horse race for the title, but with five more rounds, they all have their work cut out for them.

Next up: Vancouver
Already 90% sold out, the 2019 Canada Sevens is looking to become a huge – and loud – party this weekend at Vancouver’s indoor BC Place Stadium. Keep up with all the action at the Match Center.

DHL Impact Player Award
A rugby player produces moments of skill and flair that are critical to a team’s success on the pitch, in the same way that DHL uses care and commitment to service your shipments. The DHL Impact Player Award recognizes such moments using a statistical analysis of individual players performances measured against four key criteria: Offloads, Carries, Linebreaks and Tackles. The scores are compiled and presented on the DHL Performance Tracker, where the total score for each player is a combination of each criteria.