With Fiji and the Ferns in full flow, “smiling assassin” Stacey Fluhler and “big” Ben Pinkelman fly past the competition to become the DHL Impact Players of the 2020 HSBC Sydney Sevens.

Although history was made once again at the latest round of the HSBC World Rugby Sevens Series, you might say “dominance” was the word of the week. Why? Two words: Ferns and Fiji. Both teams embodied domination, winning all their matches on the road to gold.

First: The Black Ferns simply steam rolled the opposition, writing a new chapter in Series history. After beating Canada 33-7 in the final, New Zealand became the first team to successfully defend the HSBC Sydney Sevens title. That plus the fact that this is their fourth title in a row definitely adds up to D O M I N A N C E.

Next we have Fiji. The 2019 Series champions returned to the top with their first win in a 2020 tournament. The team beat South Africa for the second time in eight days, although this time they were fighting for first and not ninth place, not to mention their very first HSBC Sydney Sevens title. Both teams were looking to bounce back from Hamilton, and they did not disappoint, serving up a Cup final every bit as thrilling as their last final matchup in Singapore. Back to their best, Fiji produced some outrageous plays and seduced the Sydney crowd with regular moments of brilliance.

New Zealand’s Stacey Fluhler reigned supreme once again – and she did it in her classic style, with a big broad smile. That’s right, the “smiling assassin” was all that and more as she made an incredible nine breaks, which are of course worth three points apiece on the DHL Impact Player Table. 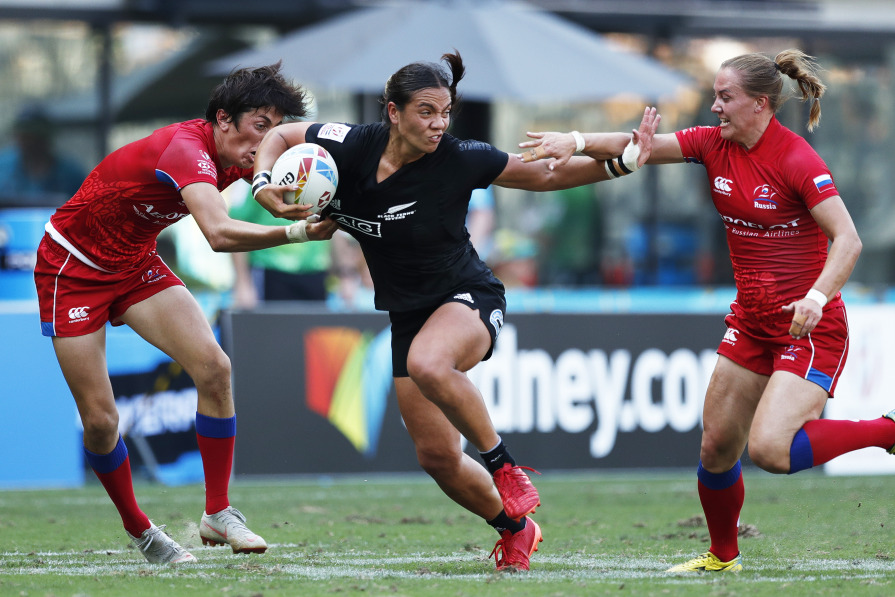 With three tackles, nine breaks, four offloads and 21 carries, Fluhler walked off the field – all smiles of course – with a whopping 59 points.

This girl is just too good.

The “smiling assassin” was all that and more in Sydney.

France’s Shannon Izar also put on a fine display, scoring a total of 56 points – an effort that helped carry her team to the bronze final, only to be bested by the home team 12-10. She certainly made an impression and is one to watch going forward. Fiji’s Ana Maria Naimasi rounded off the top three with 51, five points adrift of Izar.

Stacey Fluhler has forged an enormous gap between herself and second placed Emma Tonegato of Australia – 37 points is now the difference on the overall DHL Impact Player Table. Australia’s Emma Tonegato remains in second at 242 points, with France’s Coralie Betrand moving into third (222) after scoring a respectable 43 points in Sydney.

Stacey certainly doesn't mince words, sending out this short-and-sweet tweet after the tournament:

Although he didn’t hit the 50-point mark, USA’s “big” Ben Pinkelman really stepped up his game in Sydney, reminding the rugby world that he’s a force to be reckoned with. He made an impact on all sides of the ball – including some fantastic line-outs! All told, the big man bagged 48 points on six tackles, three breaks, seven offloads and 19 carries.

Pinkelman ended the tournament four clear of South African Angelo Davids and three ahead of US compatriot Perry Baker. Ireland’s Terry Kennedy came in fourth with 42 points – a performance that pushed him to the top of the overall DHL Impact Player Table with 152 total points. France’s Tavite Veredamu is in second, followed by Kennedy’s countryman Jordan Conroy in third.

Big Ben reminded the rugby world that he’s a force to be reckoned with.

While Fluhler appears to be flying away with it on the women’s side, we’ll have to see if Kennedy can hold on to his four-point lead on the men’s. In less than a month, we’ll find out if anyone can rise to Fluhler’s level and whether Kennedy can maintain his impact play.

Players are awarded 2 points for offloads, 1 for tackles, 3 for line breaks and 1 for carries.

Despite Sydney being their first finish outside the top two, the All Blacks still lead the Men’s Tournament with 76 points. South Africa trails by nine, with France a further 11 back. With USA aiming for a hattrick of titles on home soil following victories in 2018 and 2019 – and with the pools and schedules announced – it’s certainly setting up to be an exciting HSBC LA Sevens in the City of Angels. We can’t wait!

The women now get a two-month break before reconvening in Hong Kong on April 3. After four wins in a row, the Black Ferns will obviously be the team to beat. They are now at 96 points, 16 clear of Australia and Canada, who are joint second, followed by France a further ten points back in fourth.