Before the 28 team captains even set foot on the pitch at 7he Sevens Stadium in Dubai, they knew they were making history. This year they’ll compete in a record six combined men’s and women’s events on the HSBC World Rugby Sevens Series for the very first time. Perhaps it was fitting that this new day would dawn in Dubai, where the tournament is celebrating its 50th anniversary this year.

While it was the second outing for the women after their season opener in Glendale, Colorado in October, Dubai marked the men’s 2020 series debut. And if the scintillating rugby sevens we saw last weekend is any indication, then we are in for some explosive, entertaining rugby between now and the finale in Paris in May.

The Black Ferns were in fantastic form in Dubai, winning all but one of their six fixtures, with France beating them 19-14 in the final pool match. Stacey Waaka was instrumental to New Zealand’s tournament victory, scoring an incredible 78 points to top the DHL Impact Player Table and be named the DHL Impact Player of the tournament. Waaka secured an amazing 12 breaks (three pointers) and 26 carries, which epitomized her potent attacking prowess across the two-day tournament. She topped those stats off with seven offloads and two tackles, not to mention a total of nine tries, the last of which she scored in the final. Not surprisingly, she was named HSBC Player of the Final, too.

Stacey Waaka was instrumental to New Zealand’s tournament victory, scoring an incredible 78 points and earning the DHL Impact Player of the tournament.

Waaka’s fellow Black Fern, Kelly Brazier, turned heads as well, making a ridiculous 17 tackles. That and 17 carries secured her second place finish, though a whopping 23 points behind Waaka. Just one point behind her was USA’s stalwart Alev Kelter, whose 26 carries ensured she didn’t lose too much ground to Waaka on the overall Impact Player Table after two rounds.

As it stands, Waaka’s incredible 78 points rocketed her to the top of the overall standings, with 124 points, with Kelter 12 points behind. Australia’s Emma Tonegato is a further 11 points adrift, trailed by last year’s overall IPA winner Alena Mikhaltsova on 98 points. Glendale IPA winner Charlotte Caslick was noticeably absent from Dubai due to an injury so she couldn’t add to her initial lead. 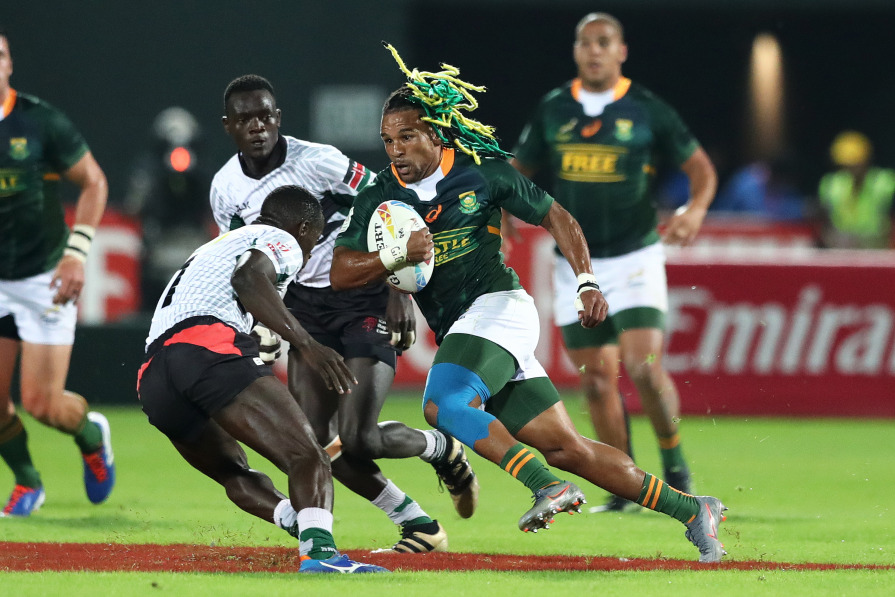 On the men’s side, it was the Blitzboks who stole the show, running away with the Cup without losing a match and playing some scintillating rugby sevens in the process. The semi-final against Samoa was a superb spectacle, with South Africa eventually emerging comfortable victors. Their dominance in Dubai peaked with an epic 15-0 victory over the All Blacks – only the second time ever New Zealand had been limited to 0 points in a sevens match. Rosko Specman was a class act across the whole weekend, earning him the DHL Impact Player honors with six tackles, five breaks, nine offloads and 20 carries for a combined total of 59 points. Teammate Justin Geduld, who took third place on the DHL Impact Player Table with 48 points, was also integral to South Africa’s success.

Rosko Specman was a class act across the whole weekend.

Irish flyer Jordan Conroy finished a brilliant second with 51 points, including an amazing 11 tackles and six breaks (three pointers). We should note that he played two matches less than Specman – so he’s certainly one to look out for throughout the rest of the series. England’s Harry Glover and Samoa’s Joe Perez also deserve a mention – Glover was electric for England, delivering seven offloads fit for any highlight reel. Perez put in nine (hefty) tackles and carried successfully 21 times.

All in all, if Waaka stays in the kind of form she found in Dubai, she’s likely going to be the one to beat this series. Specman will need to extend his explosive style of play across the tournament to stay ahead of the likes of Conroy and Geduld. In just a few days we’ll find out if he can do it at the next historic stop on this 2020 series – the HSBC Cape Town Sevens, which is not only set on his home soil but will also be the first time Cape Town hosts both the men’s and women’s competitions in a season.

This year’s tournament will be the first time that Cape Town host both the men’s and women’s competitions. It is one of six combined men’s and women’s events this year before 24 teams will travel to Japan in July for the Tokyo 2020 Olympic Games. Following a successful Emirates Airline Dubai Rugby Sevens last weekend, the HSBC Cape Town Sevens will be the second round on the men’s series and the third on the women’s.