While the Black Ferns and the All Blacks made it a New Zealand double gold, Seraphine Okemba and Tevite Veredamu made it a French double impact.

This historic HSBC World Rugby Sevens Series continued in South Africa, where 12 women’s teams made debut at the HSBC Cape Town Sevens. Eleven countries and sixteen locations have now played host to the women’s series since it began in late 2012.

That means of course that this year’s tournament was also the first time a joint competition was held in Cape Town in a season that will see a record six combined men’s and women’s events on the HSBC World Rugby Sevens Series. It was also the first time since the 2015-16 season that the women’s teams had back-to-back events on the series. And let’s not forget that South Africa’s women played on home soil for the very first time – a historic moment they won’t soon forget.

While we watched the Black Ferns and the All Blacks take gold home for New Zealand, we were also treated to two French DHL Impact Players – Seraphine Okemba and Tevite Veredamu.

All Blacks beat Blitzboks in nail-biter 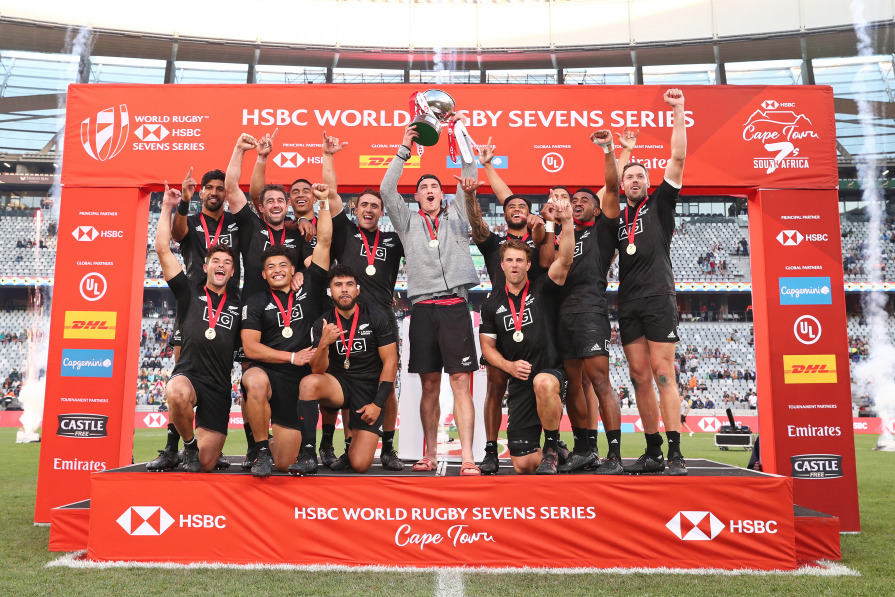 The HSBC Cape Town Sevens certainly lived up to the hype.  Only a week after South Africa beat New Zealand 15-0 in the final in Dubai, the Blitzboks met the All Blacks once again in a bid to win the first two rounds of the series for the first time since triumphing in Dubai and George in 2008-09. No matter who your favorite team is, it doesn’t get much better than watching New Zealand face South Africa in front of 50,000 roaring fans in one of the world’s rugby capitals.

Though the Blitzboks got off to a better start, it was the All Blacks who eventually converted to complete a come-from-behind 7-5 victory after a scoreless first half.

Completing the New Zealand double gold, the Black Ferns were crowned the inaugural HSBC Cape Town Sevens champions after beating long-time rivals Australia 17-7 in the final. It was their 24th gold in 40 events since the series begin in 2012-13 – and it came right after another historic final the weekend before, when the Kiwi ladies became the first to win back-to-back titles in Dubai.

The HSBC Cape Town Sevens certainly lived up to the hype.

It was a bit of a rocky road to the final as New Zealand was only able to putter past Fiji and Russia in the pool stages and had to go into sudden-death extra time to beat England in the quarter finals. But they found their form just in time to overcome Canada and Australia. 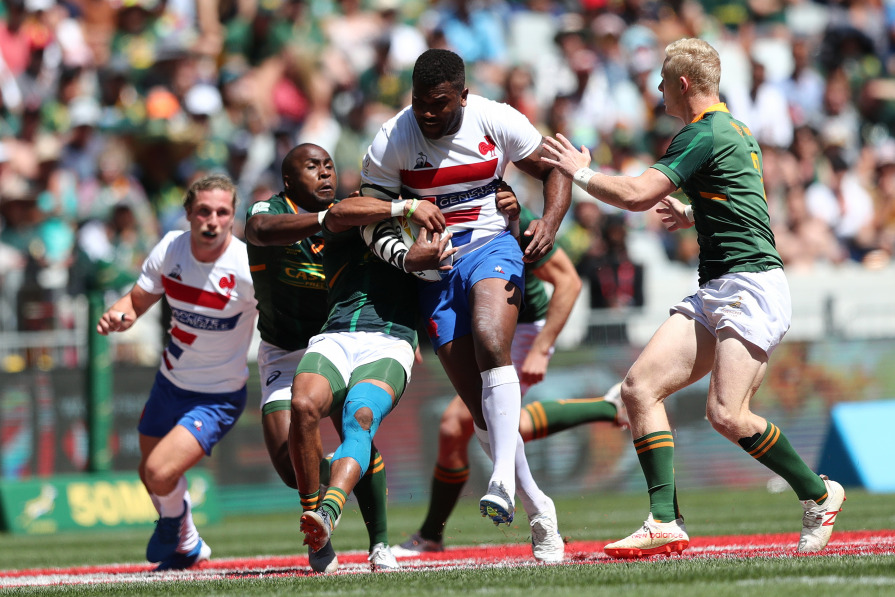 Both the French women’s and men’s teams put on strong performances over the weekend, taking fourth and third place respectively. The fact that both teams fielded some of the tournament’s top players is reflected in the DHL Impact Player Table.

While Seraphine Okemba topped the women’s IPA Table, Camille Grassineau and Coralie Bertrand made the top 10. On the men’s side, the two standout players were Tevite Veredamu and Jean Pascal Barraque, who placed first and second on the men’s IPA Table.

The two standout players on the men’s side were Tevite Veredamu and Jean Pascal Barraque, who placed first and second on the IPA Table.

Okemba amassed 58 points from 10 tackles, 4 breaks, 6 offloads and 24 carries. Australia’s Emma Tonegato was second, one point behind, with Canada’s Brittany Benn rounding off the top three with 56 points. Grassineau and Bertrand were not far behind with 49 points apiece.

After her sizzling performance in the desert, New Zealand’s Stacey Waaka wasn’t on fire in Cape Town, yet she still tops the table with 163 points, four clear of Tonegato. USA’s Alev Kelter is only a further one point behind, making it extremely tight at the top with five remaining tournaments.

Tevite Veredamu scored 53 points off of 7 tackles, 4 breaks, 7 offloads and 16 carries. This has moved him to 83 points and third place on the overall IPA table. His teammate and French captain was joint second with Fiji’s Napolioni Bolaca on 45 points.

After earning the DHL Impact Player Award in Dubia, Rosko Specman remains ahead in the overall standings despite not reaching the top ten in Cape Town. At 94 points, he’s three head of Ireland star Jordan Conroy.

Players are awarded 2 points for offloads, 1 for tackles, 3 for line breaks and 1 for carries, with the totals tracked on the DHL Impact Player Table.

After the double gold in Cape Town, the two New Zealand squads head home for the HSBC New Zealand Sevens with high confidence. Playing for the home crowd in Hamilton for the first time in a HSBC World Rugby Sevens Series event, there’s no doubt the Black Ferns will be hungry for another win – one that will be historic. Hamilton becomes the 17th host since the women’s series began in 2012-13 and is the fourth round of the current series. The pools and schedule have been confirmed for this hotly anticipated showdown at FMG Stadium Waikato on January 25-26, 2020.  Don’t miss it!