Another historic moment for motorsport comes around on Sunday 10th June when Switzerland hosts an international circuit race for the first time since 1954. It is the Zurich ePrix, the latest fixture to join the itinerary of the world’s first all-electric racing series, the innovative ABB FIA Formula E.

With this being the first car race in Switzerland for 63 years, the interest shown by fans and the sense of anticipation among the drivers is immense. To ensure the success of the first ever Zurich ePrix, a lot of hard work is going on behind the scenes. As Official Logistics Partner to the ABB FIA Formula E, DHL has a vital role to play in preparations for the big day.

The DHL team in Zurich is expected to fulfill some very special requirements. Timing, flexibility and absolute precision are the key to success here.

"In Zurich, timing is paramount, because we are delivering the cars and equipment to the teams while work on the pits is still ongoing," explains Alessandro Viano, DHL Head of Motorsport Italy. "Furthermore, the streets have to remain open to traffic during construction. That's an additional challenge, which is why we always have to be flexible in everything we do."

In Zurich, timing is paramount, because we are delivering the cars and equipment to the teams while work on the pits is still ongoing

Zurich has a population of more than 400,000 people, although this figure rises to around 1.8 million when the entire metropolitan region is taken into account. To maximize the number of spectators, the race will be staged right in the heart of the city. The temporary race track runs for 2,465 meters along the lake­ promenade, through the finance and banking district and through the commercial center of Switzerland's largest urban conglomeration.

"Zurich is a really special city with numerous parks, fountains and statues," says Alessandro. "That's why we have to make sure we are very precise in our transport operations as we move our vehicles around the city to the racetrack. It's different from the last race in Berlin Tempelhof, where the area given over to the circuit was on a much more spacious scale." 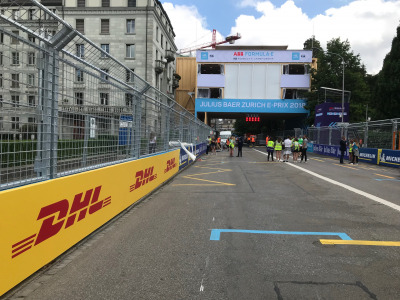 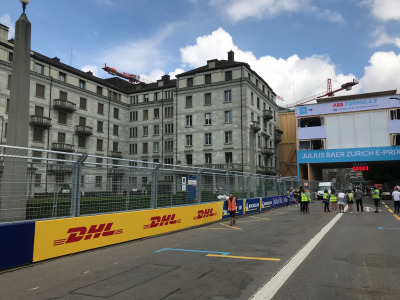 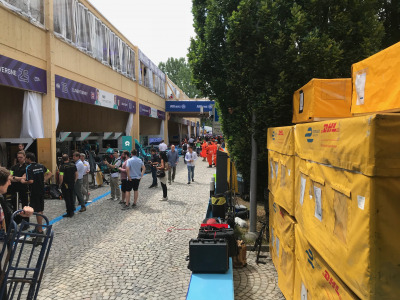 Alessandro's team of on-site logistics experts have to ensure that the containers specially constructed for ABB FIA Formula E get to the racetrack both safely and reliably. After all, they contain valuable freight: all 40 race cars and additional equipment for the ten teams.

It's a stimulating challenge for Alessandro and one that he and his DHL team are happy to accept: "Zurich is new to us as a venue, and the timing is different from other races, but ultimately, we know exactly what has to be done. That's where routine comes in. I would also like to stress the excellent level of cooperation we get from the Formula E organizers. This is very important in making sure that we can do the work in such a short time." 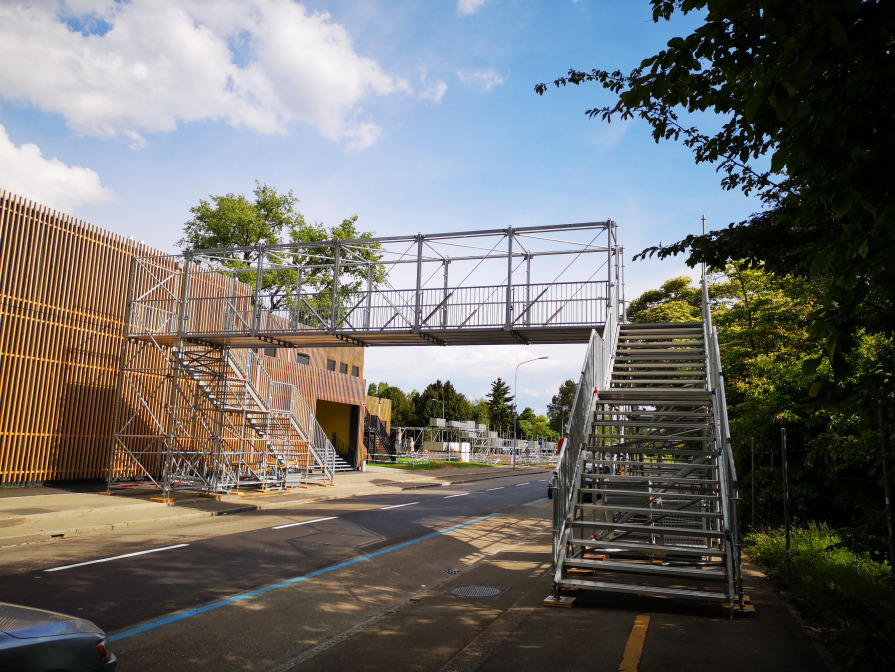 Another special feature of the Zurich ePrix - and one that is probably unique in the world of motorsport - is the pit lane in which the facilities have been made entirely of timber. This unusual approach to construction was made necessary by the spatial constraints alongside the port area.

On his travels around the world with ABB FIA Formula E, even Alessandro has never seen anything like it before: "The wooden pit facilities are really quite unusual. The race suites and the bridges over the racetrack are also made of timber. Absolutely incredible! I am sure that the spectators here are in for a truly unique race experience."