A concept that began with a show run through the city center in December 2012 has now become a reality. ABB FIA Formula E is about to make its Roman debut. The European part of the season gets underway in the Italian capital on 14th April 2018.

After the races in Hong Kong, Marrakech, Santiago de Chile, Mexico City and Punta del Este, the world’s first all-electric racing series is about to commence the second half of the 2017/18 season. As Official Logistics Partner, it is DHL’s job to ensure that all the equipment needed by the electric racing series is delivered safely and punctually from South America to Europe. Rome is now the 18th city to host Formula E.

The Italian capital, formerly better known for its gladiatorial contests, is the perfect venue for hosting an ABB FIA Formula E race and a city that Formula E CEO Alejandro Agag has long hoped to include in the racing calendar: “Seeing and hearing the Formula E cars on the streets of a place like Rome, for me will be a truly unforgettable experience. I’d like to thank everyone who made it happen, bringing Formula E to the Eternal City. This demonstrates the unity of intent to promote alternative and clean energy solutions, speeding-up the transition by means of the developments and innovations that characterize our series.”

The Eternal City: A wealth of sights

Rome is the largest city in Italy with a population of around three million inhabitants. It was first dubbed the “Eternal City” by the poet Tibullus in the 1st century BC. It has many spectacular historic locations: the Forum, St. Peter’s Basilica and the Vatican City were declared World Heritage Sites by UNESCO in 1980.

Every year, millions of tourists from all over the world come to Rome to visit the famous buildings and museums. Their number will be boosted on the weekend of 14th April when the Rome ePrix is contested on the temporary Circuto Cittadino dell’EUR.

The future means sustainable mobility, innovation and above all respect for the environment.

Virginia Raggi, Mayor of Rome: “Rome is a key protagonist in the international landscape, with EUR setting the scene for the first Formula E race in Italy. The future means sustainable mobility, innovation and above all respect for the environment. With this event, Rome will benefit from a positive economic impact such as other major cities in Europe and around the world have experienced.” 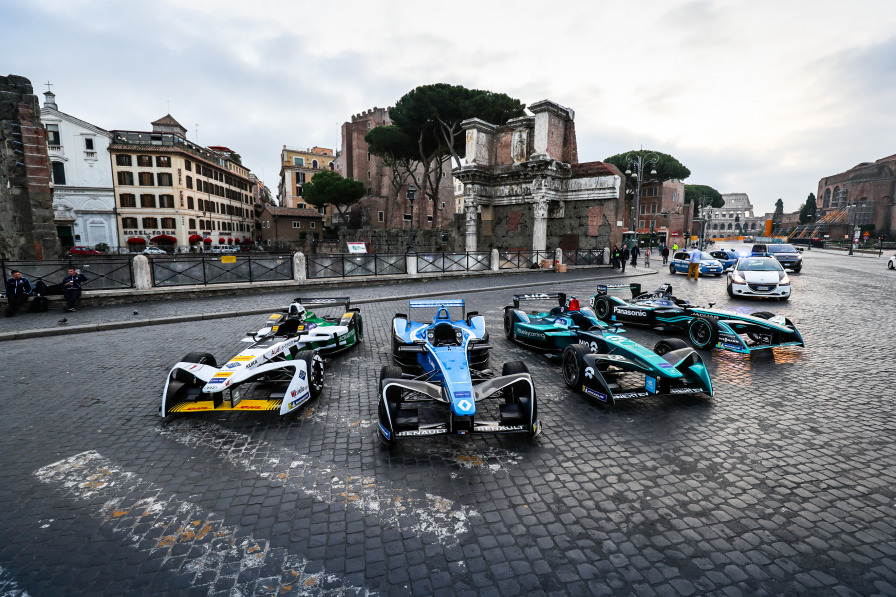 A legacy for the Eternal City

With its so-called Legacy Programme Formula E aims to make an active contribution to sustainability in Rome and leave a beneficial mark on the Eternal City. There are plans providing for road surface improvement and renovation around the EUR area where the city circuit has been laid out, installing several charging points for electric vehicles and adapting Wi-Fi connection systems.

“Formula E will bring investments and benefits to the city with its legacy programme, such as new streets and electric charging stations,” says Mayor Raggi. “Our desire is to see more and more vehicles powered by clean energy circulating in Rome because, for our administration, sustainable mobility and safeguarding the environment are extremely important objectives.”

Looking forward to a “home race”

The Rome ePrix is ​​the seventh of twelve races in the 2017/18 season. Just like local favorite Luca Filippi, reigning Formula E Champion Lucas di Grassi also has reason to look forward to this particular fixture. “Italy is like a second home for me,” says the Audi Sport ABT Schaeffler man. “My grandparents were born there, I have an Italian passport and plenty of Italian blood running in my veins.”

The Circuto Cittadino dell’EUR will be the second-longest track on the calendar at 2.84 km in length. With a total of 21 turns, the start/finish line is located on Via Cristoforo Colombo, where the cars will be racing around the Obelisco di Marconi against the backdrop of the iconic Colosseo Quadrato. Di Grassi: “The track looks incredibly challenging: fast sections, slow sections, several overtaking opportunities – the fans are going to experience a real Formula E highlight.”

With the first half of the ABB FIA Formula E season now out of the way, Jean-Eric Vergne leads the championship standings. The Techeetah driver has so far scored 109 points. His closest rivals are Mahindra’s Felix Rosenqvist on 79 points and Sam Bird of DS Virgin Racing in third place on 76 points. As at all the Formula E races, DHL is bringing along various innovations to put on display in the Allianz eVillage.

In addition to eBikes, DHL will be showing off its EffiBOT, which is specifically wired to work safely with people, following workers around in the warehouse and doing most of the physical work. EffiBOT will pick up goods that have been collected and automatically take them to the unloading point as soon as it is fully loaded.

The start of the European Formula E season also coincides with the launch of the Treasure Hunt App. Explore and find the next generation solutions hidden around the streets of Rome to win a fantastic prize! The app is available for both Android and iOS and is the perfect way to while away the time leading up to the race.