The ABB FIA Formula E will start its sixth season with a double-header in Diriyah, 22nd/23rd November 2019. Record-breaking race calendar, record number of entrants and new regulations. Here are the most important innovations for the 2019/20 season.

As Official Logistics Partner, DHL has been responsible for running logistics in its totality for the ABB FIA Formula E since its inception in 2014. DHL has developed a multimodal approach that combines air transport with rail, road and sea in order to make global delivery logistics as efficient as possible.

With 14 races in 12 major cities on five continents, the race calendar is more comprehensive than ever before in ABB FIA Formula E history. New venues include South Korea’s capital Seoul (May 3rd, 2020) with its millions of inhabitants and Jakarta, the Indonesian capital, (June 6th, 2020).

Also new for 2020 is the return to London for the season finale; the final rounds of the first two seasons were held in the British capital city. Formula E will stage its last two races of the season (25th/26th July 2020) on a new track in the docklands area. A special feature of the event will be that part of the track will lead through the halls of the ExCel exhibition center. 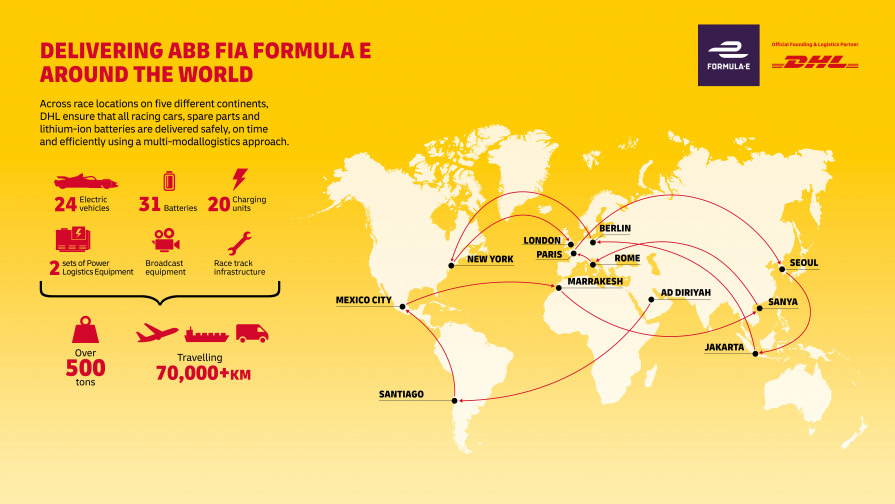 With twelve teams and 24 drivers, Formula E has a record number of entrants for the start of its sixth season. Apart from the Mercedes-Benz EQ Formula E Team, who are taking over the slot vacated by HWA Racelab, TAG Heuer Porsche will also be new to the Formula E grid.

“Generally speaking, we always enter races with the same goal in mind, to win,” said Pascal Zurlinden, Porsche’s Overall Project Director for Factory Motorsport. “However, we also know how strong our competitors are, and respect that, for sure, but nevertheless, we’re looking forward to the challenge.”

Taking into account Audi Sport ABT Schaeffler and BMW i Andretti Motorsport, four car-makers in all from Germany will compete against each other for the first time in an FIA championship.

“Fans can look forward to a super-thrilling season. We have two new manufacturers – Mercedes and Porsche – who will immediately be in contention, plus 24 absolute top-class drivers,” said Audi driver and Season 3 champion, Lucas di Grassi. “It’s great to see Formula E becoming increasingly professional and exciting.”

Ten international manufacturers will be putting their skills to the test in Formula E. They are joined by Audi Customer Racing team, Envision Virgin Racing and Venturi Racing from Monaco, who, for the first time, will be fielding vehicles provided by newcomers, Mercedes-Benz. DS Techeetah are the ones to beat as reigning team champions with two-time Formula E champion, Jean-Eric Vergne. The introduction of this particular new rule should have a significant impact on racing. Starting this season, the Gen2 racing cars will have 1 kWh per minute deducted from the total amount of available energy during a caution period (safety car, full course yellow).

This puts the focus even more on energy efficiency. Also, the timekeeping system will be stopped during a race suspension to ensure that an E-Prix goes the full distance. A Formula E race usually lasts 45 minutes plus one lap.

Attack Mode has also been modified slightly for this season. Drivers receive a power boost for a certain amount of time when the overtaking assistance is activated, but in future, the maximum power provided by the additional boost after activation will be 235 kW and not 225 kW. At the same time, the use of Attack Mode during a safety car period or full course yellow will be banned.

In another innovation, the fastest drivers from each of the qualifying groups will receive an extra point towards the championship. As previously, the pole-sitter will continue to have the benefit of three extra points.

After a thrilling inaugural season, Jaguar I-PACE eTROPHY - the world’s first all-electric touring car race series returns for season two with a double header on Friday 22 and Saturday 23 November at Diriyah as the official support race to the ABB FIA Formula E Championship.

Jaguar Land Rover and DHL have worked together for over 22 years to manufacture world-class vehicles which sell around the globe. With over 35 years’ experience in motorsports logistics, and unrivalled leadership in delivering sustainable solutions, DHL extended its collaboration to the Jaguar I-PACE eTROPHY Championship. As a Founding Partner and global logistics partner, DHL is responsible for managing all logistics activities for the series and travelling infrastructure.

The second season of Jaguar I-PACE eTROPHY will see up to 20 identical Jaguar I-PACE battery electric racecars on the grid in 10 races, across eight global cities. New for season two is the introduction of Attack-Mode providing an extra 20% in torque and power for a specified duration providing increased race strategy and additional overtaking opportunities.