13 races, 12 cities, 5 continents, 1 brand new racing car: the ABB FIA Formula E series is about to enter a new era! The fifth season of the world’s first electric formula racing series will be one of new superlatives and revolutionary technology. As Founding Partner and Official Logistics Partner, DHL looks forward to the opening round of the season on 15th December, the SAUDIA Ad Diriyah E-Prix. Read on to find out what’s new.

It is the biggest innovation in Formula E to date: for the first time since the series was inaugurated in 2014, only one car per driver per race will be used in the upcoming 2018/2019 season. The car change during the race has been eliminated, as battery capacity is now sufficient for the entire race distance of 45 minutes plus one additional lap. It is further evidence of how Formula E is driving innovation and technology in the automotive industry.

The brand new Gen2 racing car not only looks futuristic but is also setting new standards in electromobility: the car, which has earned the nickname Batmobile due to the absence of a rear wing, accelerates from 0 to 100 km/h in just 3.1 seconds. The top speed on the temporary street circuits laid out in the downtown area of the world’s most glamorous metropolises is around 240 km/h.

The electric power for all Formula E teams comes from an identical 374kg battery supplied by McLaren. The lithium-ion unit, which is located between the driver’s seat and powertrain, has a capacity of 52 kWh and can be fully charged within 45 minutes.

The new Gen2 cars produce 250 kW (340 horsepower) which is available to drivers in free practice and qualifying. In the race itself, however, performance is limited by the regulations to 200 kW (272 horsepower). The popular Fanboost allows the drivers to briefly step up power to 250 kW in the race.

The technology of the Formula E cars is developing just as fast as the series itself. A completely new feature is the brake-by-wire system: brake control and transmission to the rear axle are decoupled from each other and electronically controlled. The brake force distribution is thus always optimally adjusted and the recuperation rate even more efficient.

After 45 races to date in 19 cities on 5 continents, the Formula E itinerary facilitated by the logistics experts at DHL continues to break new ground. For the first time, the season opener will be hosted by Saudi Arabia. Formula E is making its debut on the new track in Ad Diriyah which is just outside the 6.5-million city of Riyadh.

Also new on the racing calendar, which includes a total of 13 races in 12 different metropolises, is Sanya, an upmarket holiday resort in China. This fixture marks a return to the People’s Republic for Formula E since the country last staged the opening race weekend of the second season in 2015.

“Sanya is an idyllic setting for a Formula E race,” says Formula E Founder and CEO Alejandro Agag. “Not just for the stunning views on the shores of the South China Sea, but for the ongoing efforts of Hainan in the field of electric mobility, which has led to Sanya boasting the best air quality of any city in China. 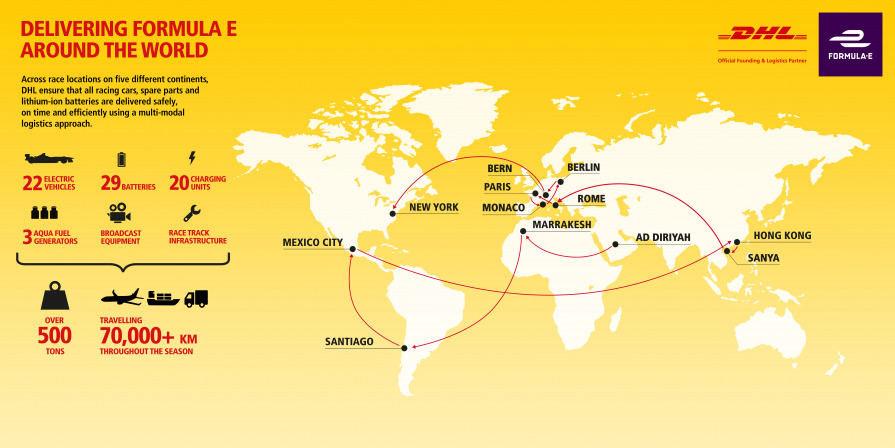 After the races in Ad Diriyah, Marrakech, Santiago de Chile, Mexico City, Hong Kong and Sanya, Formula E takes in a string of venues in Europe. After the successful debut in Switzerland in 2018, the e-racing series will be contested in Bern for the first time. Rome, Paris and Berlin have their fixed place in the calendar, while Monaco hosts the event every second year.

For the third time in a row, New York will be the setting for the final weekend (13th/14th July 2019) and the only double header on the race calendar. Tension is sure to run high in the Big Apple, as the ultimate destination of the title in the previous four seasons has always been decided in the grand finale.

11 teams, 9 global brands, 22 top racers: these are the ingredients for the electrifying fifth season of Formula E. With the arrival of BMW in the guise of the BMW i Andretti Team, another major German manufacturer is joining the series. Nissan becomes the first Japanese marque to enter the fray, replacing Renault at three-time team champions e.dams.

Also new on the grid are HWA RACELAB, the longtime partner of Mercedes-Benz, who are gearing up for entry in Season 6 with Porsche as partner manufacturer. And of course, Audi Sport ABT Schaeffler as the reigning team champions and partner team of DHL will be there again. Among the 22 racers in the line-up are famous names such as the two Formula E rookies Felipe Massa (with team boss Susie Wolff at Venturi) and Stoffel Vandoorne (HWA RACELAB). Ex-Formula 1 driver Pascal Wehrlein (Mahindra Racing) in his first season will be squaring up to established Formula E stars such as Lucas di Grassi and reigning champion Jean-Eric Vergne.

The most significant new development for the upcoming Formula E season is undoubtedly the elimination of the car change in the middle of the race. In order to provide the teams with an additional strategic element, the so-called Attack Mode will now be used for the first time. The drivers will cross a specific area of the track away from the racing line in order to gain an additional power boost.

To make the races even more strategic, the teams will be informed about the precise details of Attack Mode for the respective track only shortly before the race starts. As a bonus feature for fans on the grandstands and watching at home on TV, LED lights on the halo protective device of the Gen2 car will light up in blue when a driver is in Attack Mode.

Also new for the 2018/19 season is the latest update to Fanboost, which now awards the extra power boost to the top five drivers (increasing from three), giving them an extra 25kW of energy to use during the race. The power will become available from 22 minutes into the race. When it’s in use, the halo device will glow magenta.

Zurich ePrix: History in the making