WATCH Ron and James’ latest highlight reel and read about what it’s like to ride on the roof of the world one day and confirm that the Easter Bunny is real the next.

Ron Rutland and James Owens continued their two-wheeled quest from London to Tokyo for Rugby World Cup 2019™ in April, leaving Iran for Turkmenistan, Uzbekistan and Tajikistan on their way into the Himalayas.

Once again, we checked in with our daring duo to find James talking endlessly about his love affair with Iran and Ron waxing enthusiastic about Tiger Woods.

Watch the video below to relive the latest stage of this odd couple’s odyssey – and read what they have to say about it below.

Ron: It’s almost impossible to name only three but here it goes: Cycling the legendary Pamir Highway, which completely exceeded all expectations, especially in terms of scale and beauty. The homestays of Tajikistan – warm refuges in every way and such an opportunity to experience local life. Seeing James dominating the mountains. Those chicken legs are made to climb!

“Seeing James dominating the mountains. Those chicken legs are made to climb!”

James: April was another incredible month on the road for Race to RWC with plenty of highlights to choose from as we cruised through Iran, Turkmenistan, Uzbekistan and Tajikistan. It’s harsh to leave Turkmenistan off the list but that’s only testament to how amazing the other three countries were. 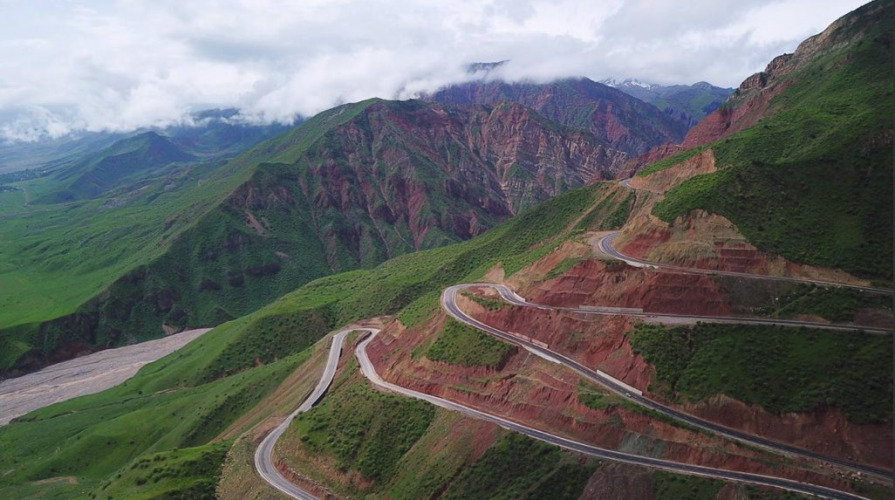 Eastern Iran, and Semnan province in particular, was a massive highlight, with some unreal climbs and great wild camping in the mountainous desert-like region. Iranian hospitality continued in April as the people seem to be pushing for the title of the friendliest country we’ve travelled through. 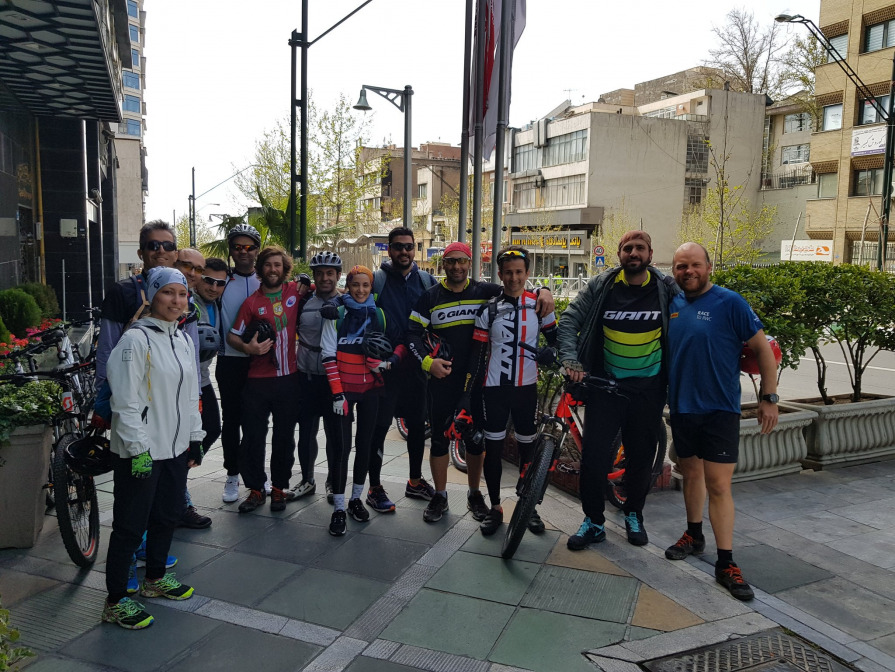 The stunning scenery and sweeping descents through Bukhara in Uzbekistan would have to be on the list. Our adventure through the area was made even more memorable by some serious off-roading as Ron and I channeled our inner Danny MacAskill. A broken wheel and sore knees were a small price to pay for the adrenalin rush!

“Where to start with Tajikistan?! What an adventure!”

Where to start with Tajikistan?! What an adventure! I can now see why the Pamir Highway is considered cycling paradise. No sub-zero temperatures and icy conditions could take away from the enjoyment of riding some of the most spectacular roads I’ve ever seen. Cruising along the valley separating Tajikistan and Afghanistan one minute and panting away up above 4,000 meters overlooking stunning snowy mountains the next, the whole Pamir experience has been breathtaking. 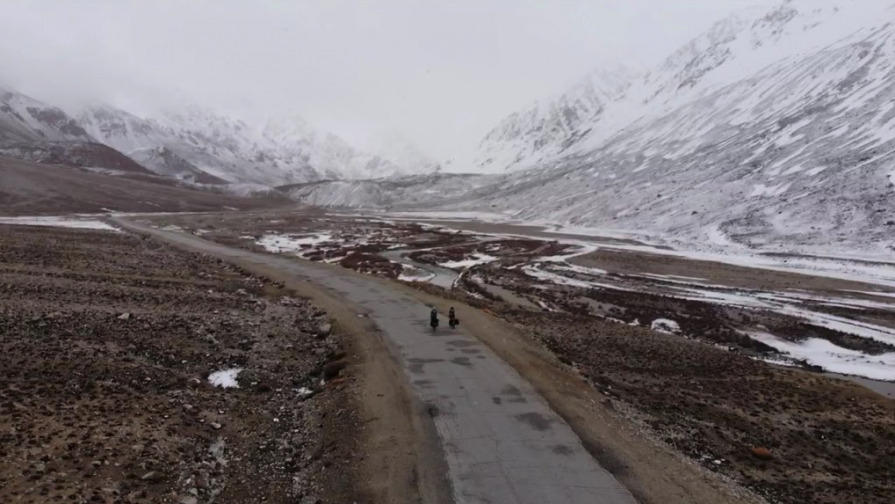 Ron:  No dogs to fight off this month, but getting through Turkmenistan bureaucracy was sure a dog fight. A different level! The cold remained a huge challenge. Considering I’m the fat one of the team, I've really found the cold very challenging at times, much more so than James...must be his Irish genes!

James: The fact that the challenges are so hard to think of can only be a good sign, but the changing terrain and conditions have provided a few new tests for us.

Our bicycles have been taking a beating this month! The road conditions on some of the mountains in Uzbekistan and Tajikistan combined with some questionable (but fun) off-road descents proved too much for Ron’s wheel! One broken wheel, a few punctures and a dodgy chain later and we’ve managed to hobble our way to the Tajikistan-China border as we make a dash for the smoother roads! 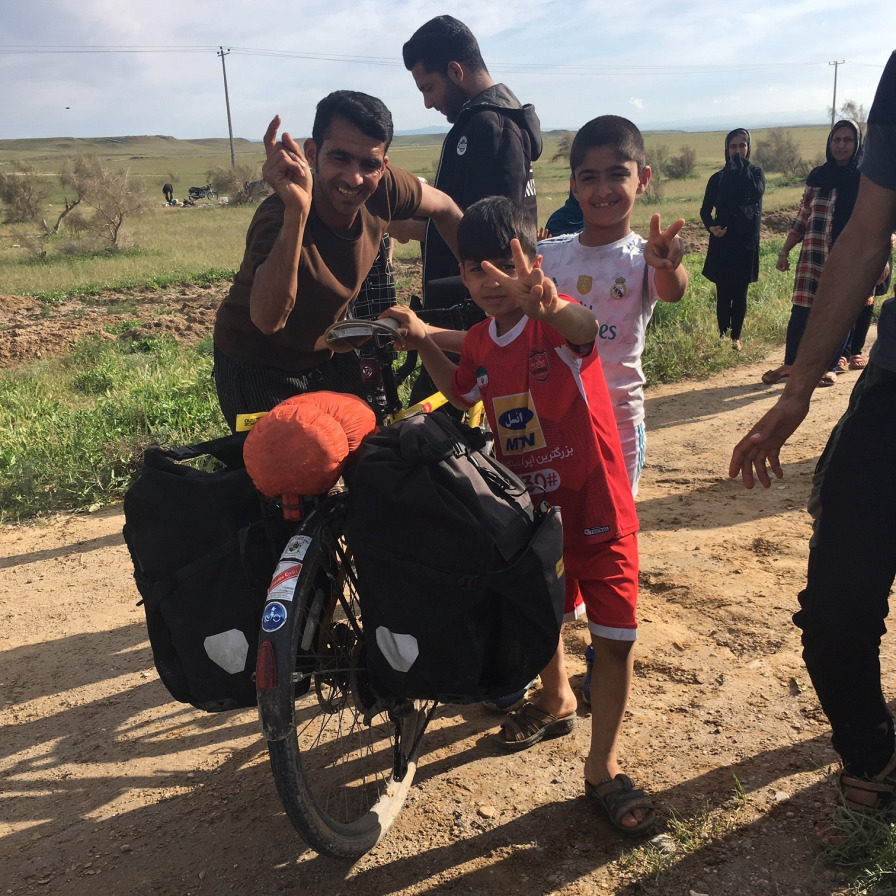 We hit our first logistical border challenge this month, with the Tajikistan-Chinese immigration staff timing their holiday perfectly to coincide with our arrival! A good excuse for a few days off the bike in the icy cold town of Murghab up in the Tajikistan mountains.

My body has adapted surprisingly well to the altitude this month but the increased climbing on the bike in thinner air has definitely resulted in more panting and heavier legs. Safe to say we’ve been sleeping well in April! 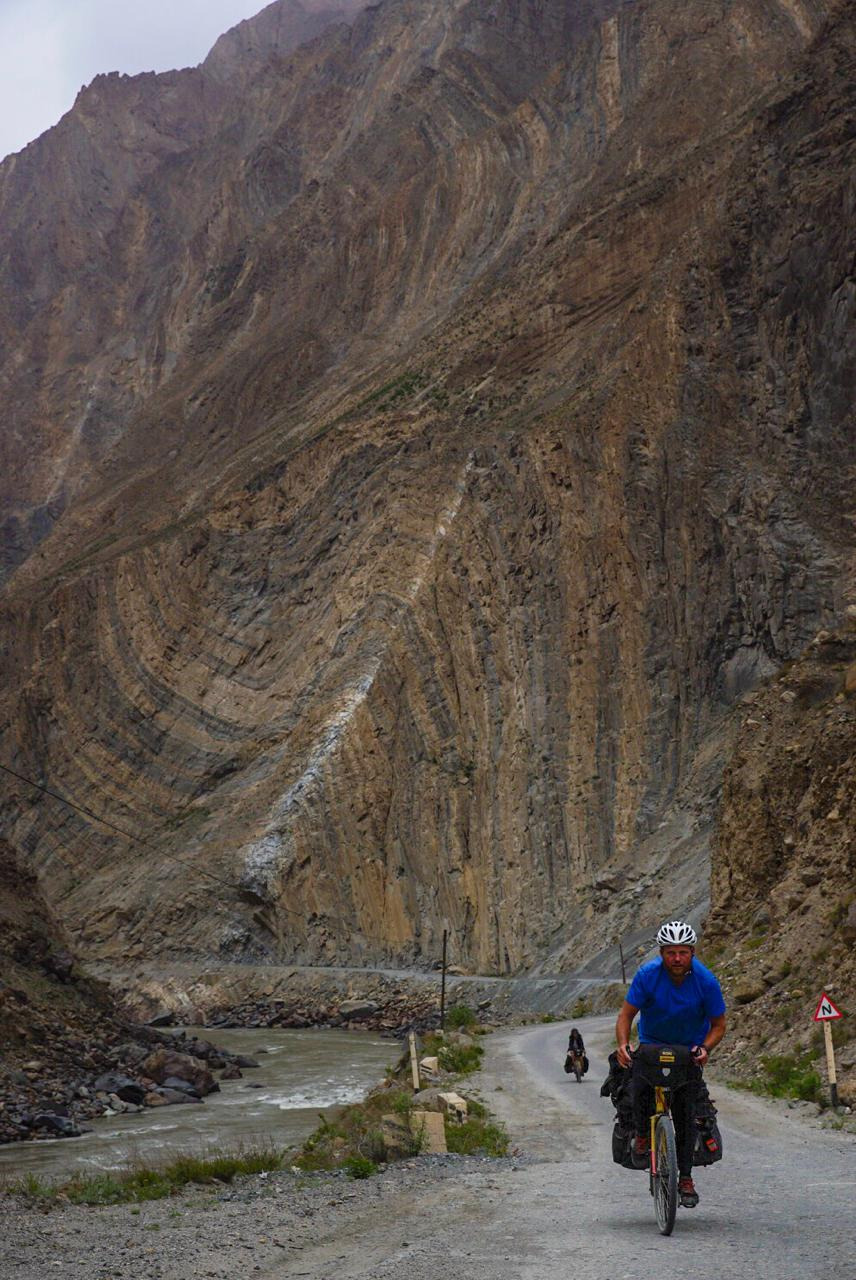 If you could have one other person join you on your trip for a day, who would it be?

Ron:  In the wake of his Masters victory, Tiger Woods. Why? For just a glimpse into what makes the GOAT tick. And, in particular, hoping some of whatever X Factor he has in coming back to win the Masters rubs off on me for when the going gets tough out here! 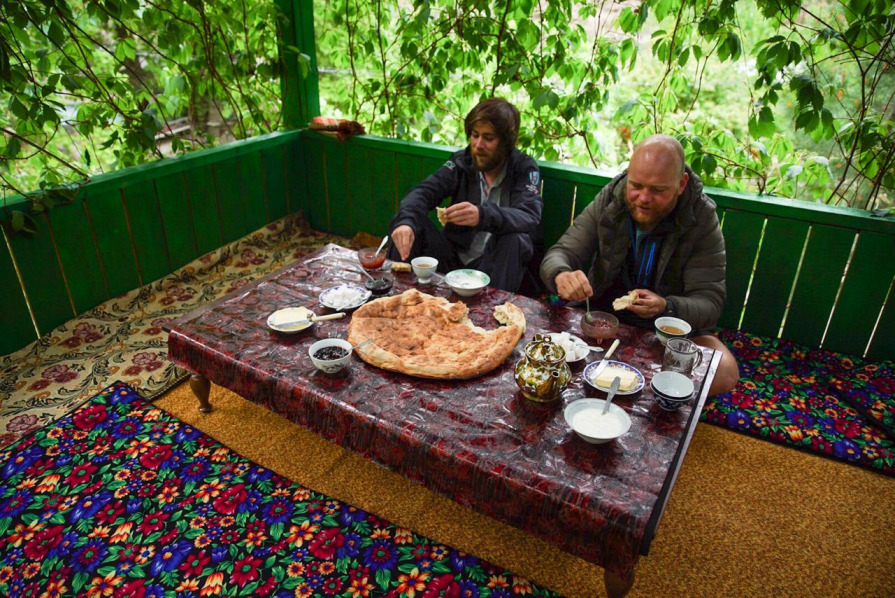 James: To avoid starting a family feud, I think it would need to be someone from outside of my family! The experience of travelling through Central Asia has been made so much more insightful thanks to my personal pocket tour guide: Peter Frankopan. He would be a good bet. The author of “The Silk Roads: A New History of the World” provides a fascinating insight into the region and would be an awesome person to have along to help shine a light on a part of the world that is often overlooked. I’m not sure how he is on a bike, but he can’t be any less fit than I was when I started.

Ron: I was surprised and amazed by the greenery and colors of the Turkmenistan desert in the spring. Mesmerizing!

James: At 28 years old, I was starting to question the existence of the Easter Bunny, but I can now confirm that he is indeed real. There is no other explanation for how Cadbury Cream Eggs could arrive at our hostel in Dushanbe, Tajikistan, inside a DHL package. The chocolate made the (normally exciting) clean socks joining them in the care package seem like a waste of space! A very welcome Easter surprise and a big boost for the start of the mountains of Tajikistan! 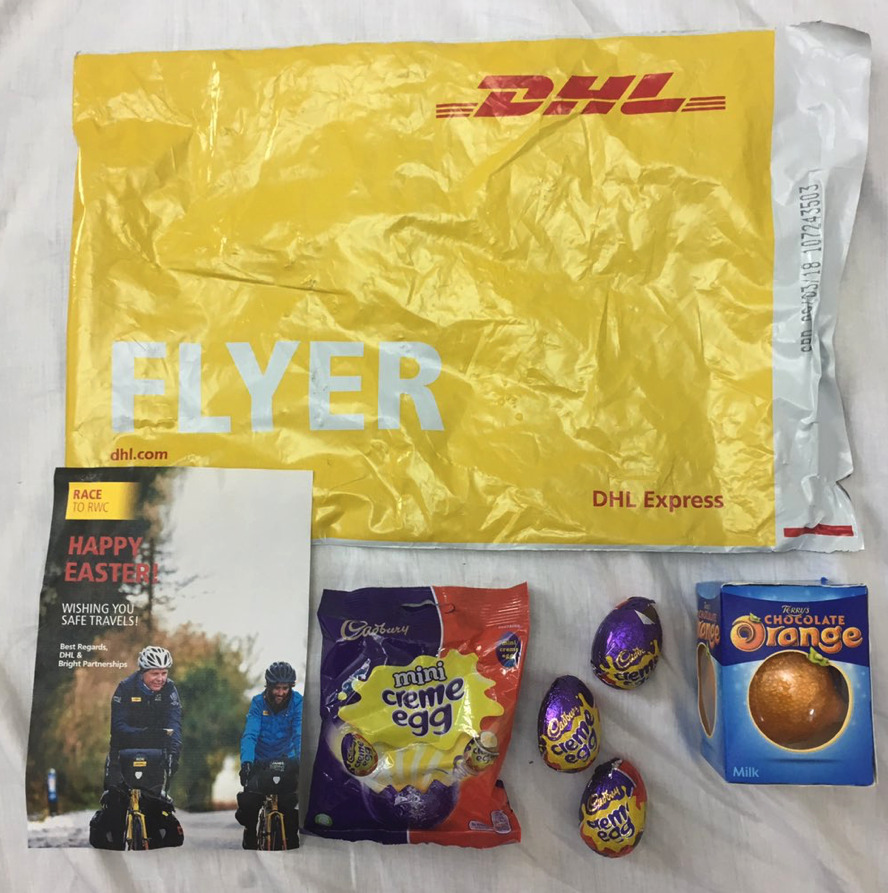 If you could live in one country you’ve visited so far, where would you live?

Ron: Phew, that's like asking someone to choose their favorite child!! There was some small German and Austrian villages that I could see myself living a quiet life in, but for the city life it would be Istanbul followed closely by Tehran.

“Phew, that's like asking someone to choose their favorite child!”

James: I can’t shut up about what a great time I had in Iran so I think it would be an easy choice for me! The warmness of the people of Iran and the massive outdoor playground it has on offer make it an ideal spot for me. Turkey is definitely not far behind! 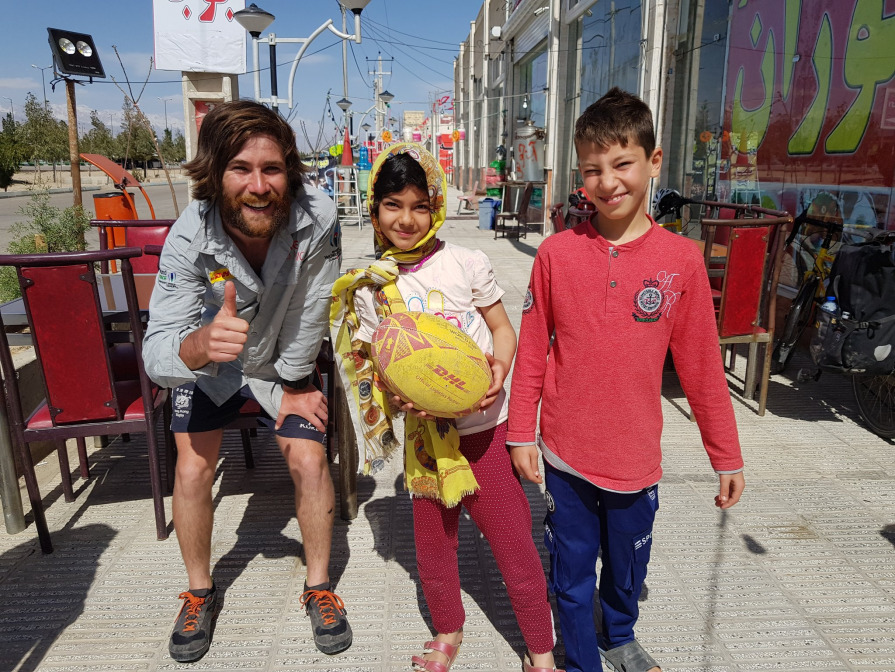 Weather improving? And how are you coping with ever changing conditions?

Ron: Not completely!! Had some glimpses and gaps of spring in the desert, but it's back to winter here in the mountains. But in less than a week we'll be in lower Pakistan and summer will well and truly be with us.

Kept our warm clothes close to hand! Looking forward to finally DHL’ing our jackets and gloves home next week. I'm sure after a few days in 40°C heat we'll be wondering how we were ever cold. 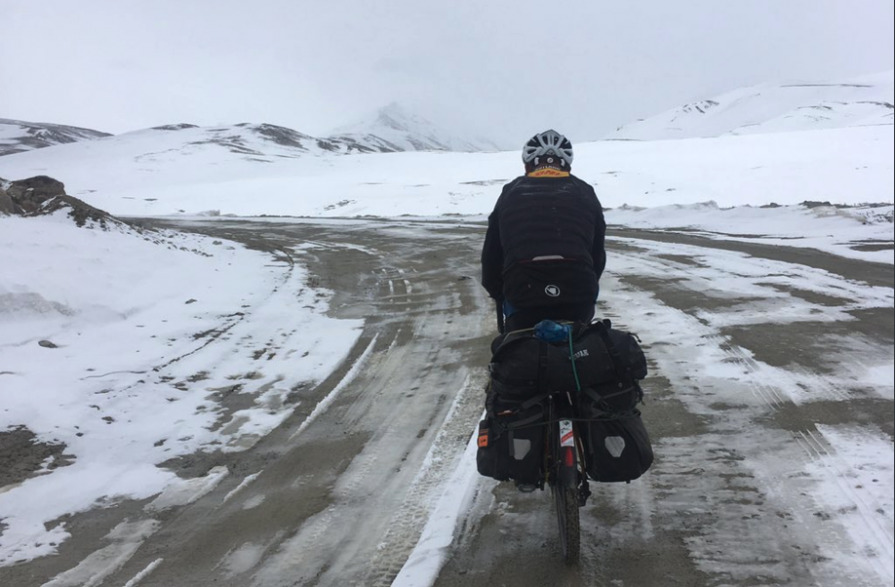 James: The weather was at first incredible in April and the shirts and shorts came back out to play until we got up into the mountains and hit what I’ve decided is our third winter! At over 4,000 meters, it seems snow is a permanent fixture. I can’t believe I’m going to say this but I’m actually going to miss the snowy cycling when we drop down into 40°+ weather in May!

“I can’t shut up about what a great time I had in Iran.”

We’ve been incredibly lucky to have been given some high quality gear and are kitted out to stay warm in sub-zero temperatures and peel off layers as the sun comes out. Having said that, the changing weather conditions have seen me get lazy as I’ve mentally entered summer mode, meaning I’ve spent the last week cycling in shorts despite the snow! My body must have started to adapt...

Ron: James is the ultimate Jekyll and Hyde. His enthusiastic 'selfie' GoPro commentary while riding is often hilarious and always contagious!

“It should be legendary!”

James: Ron’s TV career was officially kickstarted in April as he became the face of a tourism commercial in Uzbekistan and was swarmed by cameras asking what made the country so beautiful. I was happy to play awkward, silent wingman in the background. It’s clearly not just DHL who see value in Ron’s charm and rugged good looks. 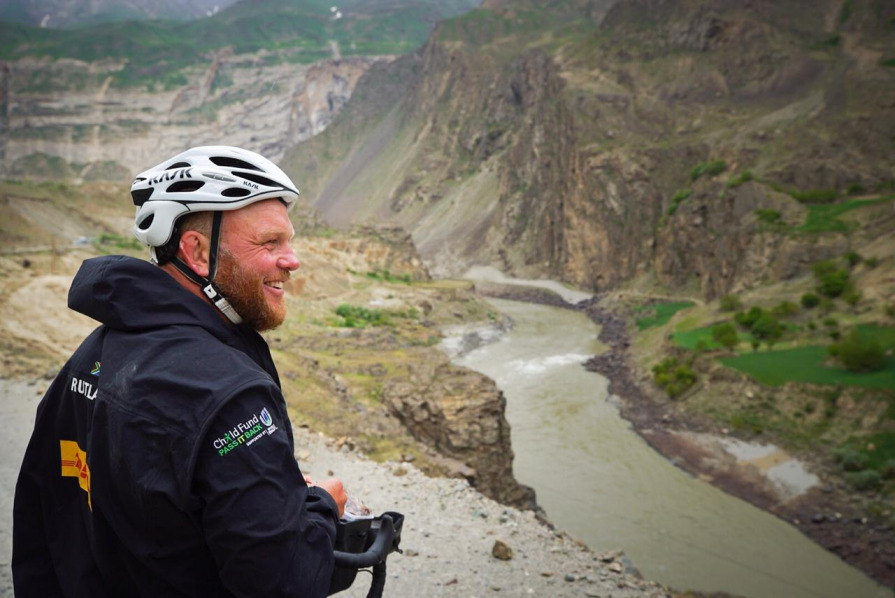 Which country are you most looking forward to visiting in May?

Ron: Again, so hard to choose, especially as we’ll be in Pakistan, India and Nepal. But if I have to pick one, it will have to be the one I haven't been to before, so Pakistan it is. And in particular cycling the Karakoram Highway down the Hunza Valley, which should be legendary!

“I’m so ready to get stuck into some curry, naan and a big mango lassi!”

James: May will see us transit through China before spending time in Pakistan, India and Nepal. It seems unfair to have to choose one as I couldn’t be any more excited for all of them. Having never been to any of the three countries we’ll be spending an extended period of time in, I’m buzzing to just get lost in the noises, colors and excitement of them all. If I had to choose one, the curry in India may swing it for me - I’m so ready to get stuck into some curry, naan and a big mango lassi! 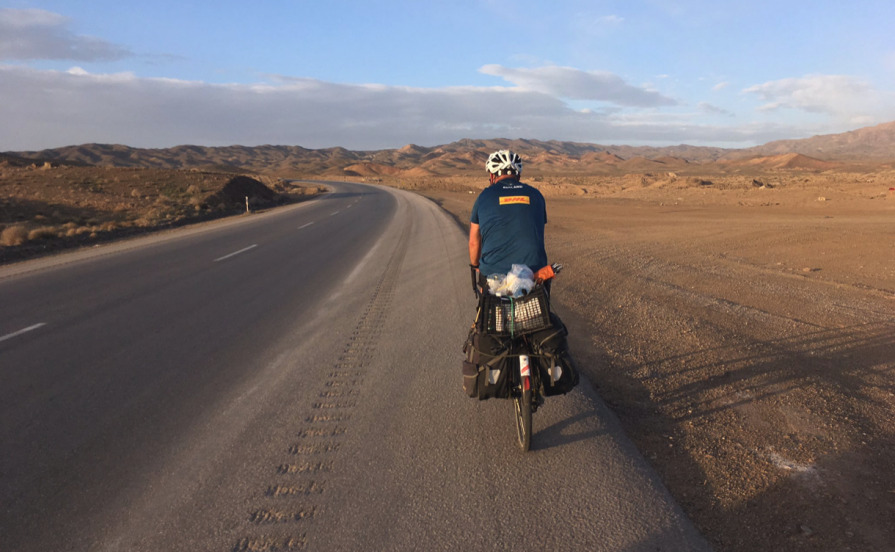