The Indianapolis Motor Speedway hosted the grand finale of the 2017 Red Bull Air Race. Fans at the legendary motor racing circuit saw the outcome of the world championship decided and also the presentation of the 2017 DHL Fastest Lap Award Trophy.

As Official Logistics Partner of the Red Bull Air Race, DHL honors the pilots who have put in the strongest performance in qualifying throughout the season. At each race, the DHL Fastest Lap Award goes to the pilot who has clocked the fastest single lap in all of the two-lap qualifying runs. Then, at the end of the season, the pilot with the most awards across the eight races is awarded the DHL Fastest Lap trophy.

Pete McLeod way out ahead

Pete McLeod had already wrapped up the 2017 DHL Fastest Lap Award ahead of the final race of the season in Indianapolis. The Canadian set the best time in qualifying at Chiba, Budapest, Kazan and Porto, thereby establishing an unassailable lead.

I’m very happy to be receiving the trophy this year.

“It always feels good to win and go fast out there,” said McLeod. “I love to put down quick times, whether they’re a single lap or a qualifying, a race or a training. I think the spirit of the award is great – just go out there and go fast. I’m very happy to be receiving the trophy this year.”

On hand to present the DHL Fastest Lap trophy to McLeod was James Puffer, DHL Sector Head for Automotive America, as well as Dustin Daniels, who earned the opportunity of as a behind-the-scenes tour at the Red Bull Air Race as the winner of a special competition arranged by the DHL Social Media Team. 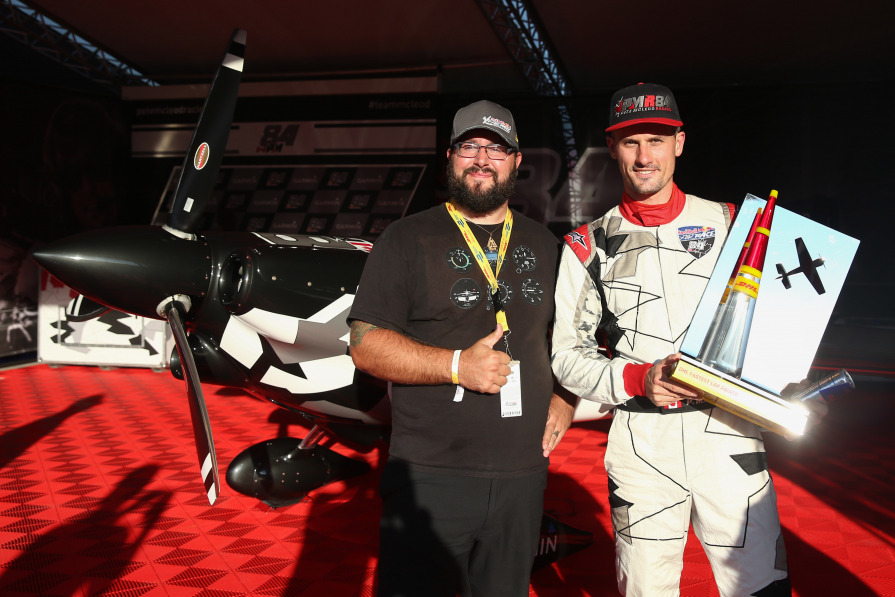 “It’s very nice that our organization is part of this event,” explained Puffer. “At DHL in America we don’t sponsor that many things: we sponsor a lot of global sports such as F1, and we do this and soccer but no baseball or NFL, so it’s different. For me it’s a blessing to be part of this.”

I’m excited to be giving Pete McLeod the trophy.

Dustin Daniels, who is a trainee pilot and huge aviation fan, was thrilled to be at the Red Bull Air Race. “To be here as a competition winner and get the hospitality is amazing. I’ve won stuff before, but never anything this extravagant – so it’s pretty crazy to be here. I’m excited to be giving Pete McLeod the trophy.”

The DHL Fastest Lap Award for the Indianapolis weekend went to Matt Hall, the first occasion this season that he had set the fastest qualifying time. Other trophy winners over the course of the campaign were 2016 DHL Fastest Lap Award winner Matthias Dolderer (San Diego), Mike Goulian (Abu Dhabi) and Kirby Chambliss (Lausitzring).

In the battle for the Red Bull Air Race world title, Indianapolis staged the most exciting closing race weekend of recent years. Going into the event, only eleven points separated Martin Sonka, Yoshihide Muroya, Pete McLeod, and Kirby Chambliss, each of whom had a realistic chance of taking the title.

Even at the Round of 14 stage, the tension was palpable. A strong wind made it difficult to judge the air gates properly. McLeod and Chambliss got it wrong and had to park their aircraft in the hangar after the first run. Dominating the Round of 14 was the head-to-head between Sonka and Muroya.

Although the Japanese pilot beat the championship leader from Czech Republic, who was handed a three-second penalty after clipping a pylon with the final gate in sight, Sonka still made it through to the next round as fastest loser. After Muroya and Sonka sailed through the Round of 8 without any problems, the competition was set for a showdown in the final, with Matthias Dolderer and Juan Velarde as bit players.

Muroya clearly coped with the pressure of the moment better, setting a new track record with a time of 01: 03.026. Although Sonka avoided making any errors, he was the slowest of the finalists, finishing fourth on the day. Had he finished as runner-up, that would have been enough to deprive Muroya of the title.

I won the race here and I’ve become a champion here. It’s amazing, I can’t believe it!

“We were aiming for the World Championship, but it’s been the tightest ever,” said Muroya with a huge grin all over his face. “We were behind to start with, so it’s been a long way and the hard way, but we won with just one point. This has been really amazing and a historic chapter in motorsport. I won the race here and I’ve become a champion here. It’s amazing, I can’t believe it! When I saw my time in the cockpit, I thought the timing system had broken, but it was a reality. I didn’t think that time was possible so something was pushing me into this position.”

Dustin Daniels was also visibly delighted to have won our competition, which attracted hundreds of entries, and to become our DHL Fan Reporter at Indianapolis. Dustin had correctly answered the question as to the distance DHL transported the Red Bull Air Race equipment from the Lausitzring to Indianapolis, namely 7,579 kilometers.

It’s pretty crazy to be here.

In his role as DHL Fan Reporter, Dustin not only had the honor of presenting the DHL Fastest Lap Award Trophy to Pete McLeod, but also had the thrill of seeing the fascinating behind-the-scenes action at the Red Bull Air Race.

So, for example, Dustin took part in the Pylon Tour and had the once-in-a-lifetime opportunity to complete a G flight: “I’m a pilot in training and about 15 hours from my PPL and my buddy who came with me is also a pilot. We both work at an airfield, so we’re around it 24/7 and I love everything aviation. It’s pretty crazy to be here.” 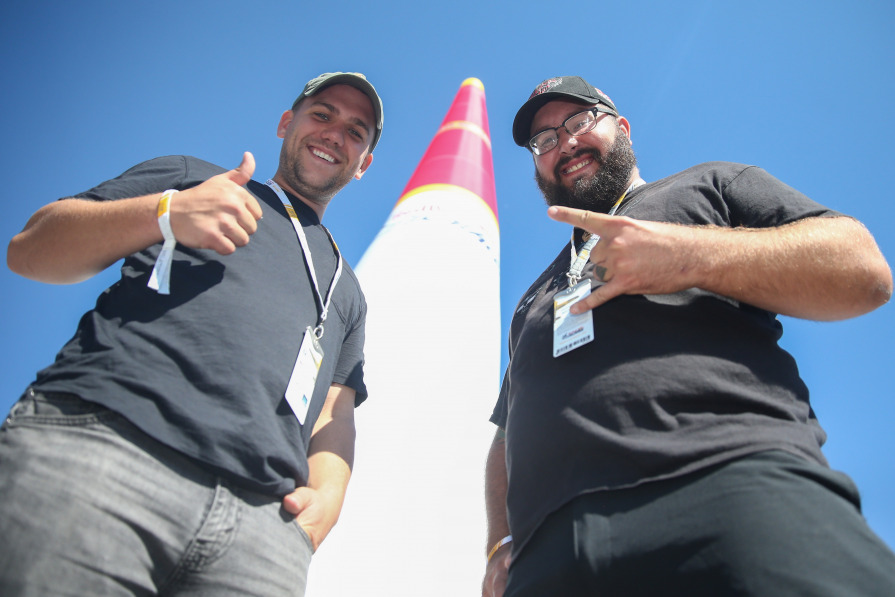 Hannes Arch: “You have to be a bit crazy”