The largest fan football tour in the world knows no borders – here are some highlights from the past few weeks.

UNITED. DELIVERED. continues to reach new and passionate Manchester United fans in far-away places around the planet. Since August, the ball and match kit have travelled to 47 countries – some, like Croatia, Uzbekistan and Cape Verde, for the very first time since the first tour kicked off three years ago.

Over 2,300 people from 98 countries have entered for their chance to host a match, and the entries keep pouring in. We’re excited to see where the kit travels next.

In recent weeks the tour touched down in the capital cities of Costa Rica, Thailand, Cyprus and Zimbabwe. Check out the highlights from these matches here:

The greatest sport in the world

Costa Rica’s capital city of San Jose may be over 8,500 kilometers from Old Trafford, but match host Miguel and his friends play with Theatre of Dreams passion. The fact that they love this game and their club is written all over their faces.

“I think it’s the greatest sport in the world,” says Miguel. “I believe that it transcends culture and language. It just unites people around the world.”

“It just unites people around the world.”

Miguel has been a United fan since he can remember. The goalie says his favorite player is David de Gea.

“You know, just enjoying the game, being a kid and playing with my friends, I think it’s just memories that I’ll never forget.”

Now a medical student, he says the game still brings him joy and has the added benefit of being a great stress reliever.

Of course he also entered to become a UNITED. DELIVERED. match host for the opportunity to go to Old Trafford and watch his heroes live.

“It’s one of those dreams you have as a child to visit the place where every match is a battle and everything is given for football,” he says.

The passion for football

On the other side of the Pacific Ocean, another capital city – this time Bangkok in Thailand – is just over one thousand kilometers further away from Manchester. But the passion for United doesn’t fade the farther you get from Old Trafford. “UNITED. DELIVERED. is a great opportunity for us, me and my friends, to show our passion for football in Thailand,” says match host Sompoch.

“We would like to get closer and connect to Manchester United.”

Sompoch says he’s a life-long United fan. He entered to become a host because, he said, “it will be an awesome experience to train and play like United do.”

It would also bring them closer to their club.

“We would like to get closer and connect to Manchester United,” he says.

A trip to Old Trafford would be the ultimate experience, especially if he could take his friends along.

“It will mean the world to me to be able to take my friends to a United match,” he says. “The atmosphere, the intensity, and nail-biting experience at Old Trafford cannot be matched by any other stadium.”

At only 3,400 kilometers from Old Trafford, the Cyprus capital of Nicosia was the closest tour stop to Manchester in recent weeks. Still, Alexandros never imagined he’d get the opportunity to host a match. The day it came, it felt like he was in a dream.

“DHL gave us this chance, and I surely wanted to be a part of it.”

“I can’t believe I was so lucky to host a match and play with the Manchester United crest on my shirt,” he said, beaming with pride. “I’m very proud and very excited.” 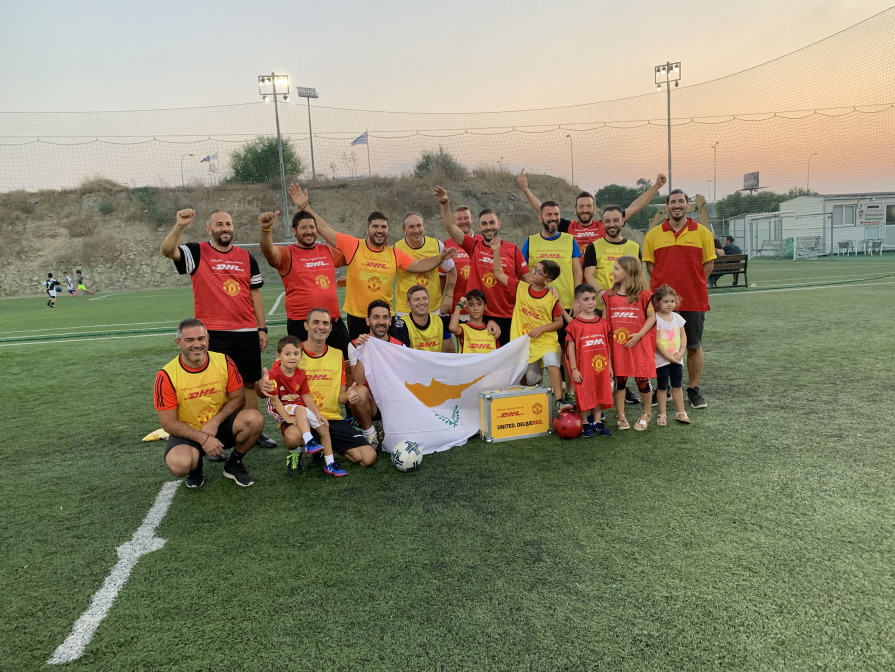 Alexandros describes himself as a big fan who lives and breathes United.

“Anything related to Manchester United is a must for me,” he says. “DHL gave us this chance, and I surely wanted to be a part of it.”

But there was another reason. The match date in his application had a special meaning.

“That day is my name day,” he wrote in his entry. “So it would be the best present for me.”

The dream of every United fan

Tucked into southeast Africa, Zimbabwe’s capital of Harare may be a whopping 12,665 kilometers from Old Trafford, but the feeling you got at this UNITED. DELIVERED. match felt decidedly close to a Theatre of Dreams experience. Host Shepherd organized much more a celebration than a simple game. Fans paraded to the pitch in their cars and a solid block of Red cheered and danced in the stands as DHL’s familiar yellow delivery van arrived with the kit.

“Something that you can cherish for the rest of your life.”

“To host a UNITED. DELIVERED. match is something really great,” said Shepherd. “Something wonderful, something that you can cherish for the rest of your life.”

And that’s precisely what he wanted to do when he entered to become a host.

“I want to create everlasting memories for us as United fans” he wrote in his entry. “To bring joy and happiness.”

A trip to Old Trafford is something that every United fan dreams of, he says. It would mean everything.

“It’s the perennial dream that you can keep and keep for the rest of your life, until it’s made successful.”

Right now, he’s closer than ever before to seeing that dream become a reality.

The best part – you can be a part of it!

The UNITED. DELIVERED. tour is far from over. It doesn’t matter where you are, you can register to host a match. Whether you want to kick around in your local park or play a competitive match on a full-sized pitch.