While Lewis Hamilton was wrapping up the world championship title in the Mexican GP, his Mercedes team-mate Valtteri Bottas was busy setting the DHL Fastest Lap for the sixth time this season.

The race at the Autodromo Hermanos Rodriguez was characterized by rapid tire wear, which compromised the Mercedes drivers’ race disproportionately. Hamilton stopped twice, and his team-mate Valtteri Bottas even pitted three times. This third set of tires did, however, enable the Finn to set the DHL Fastest Lap in a time of 1:18.741. It came on Lap 65th immediately after his third and final stop. 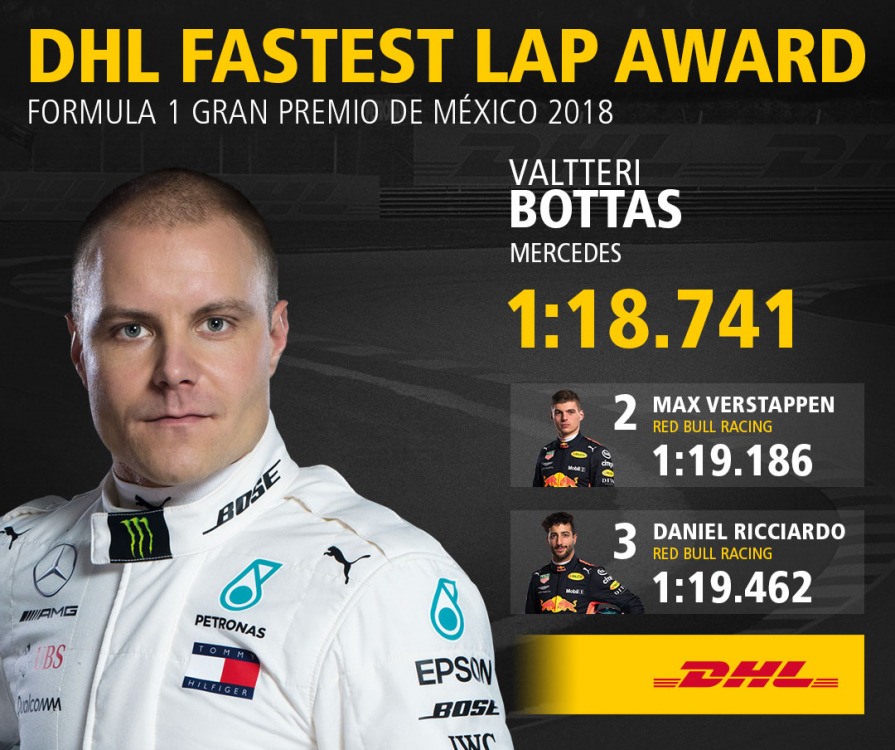 "The start of the race was actually pretty good, but then we started to struggle with the tyres. The tyre life on this track was really poor; I ended up doing three stops, which is two stops more than we predicted", Bottas said. "I tried to manage the tyres, I made sure not to slide, but they still just fell apart. I don't know yet why we struggled so much and on all three different compounds, so we will have to look into that and find out why we ran into these problems."

The second fastest lap of the race was registered by overall winner Max Verstappen. The Red Bull driver took the lead at the start and retained it for the entire race. The third-fastest lap went to the second Red Bull driven by Daniel Ricciardo. But the Australian had a miserable day compared to his team-mate: he was forced to retire shortly before the end of the race due to a technical issue whilst on course for a podium.

The DHL Fastest Lap time of 1:18.741 minutes set by Valtteri Bottas was also a new lap record for a race at the Autodromo Hermanos Rodriguez. The Mercedes driver shaved 0.045 seconds off the previous best time set by Sebastian Vettel. Red Bull’s Daniel Ricciardo also broke the absolute track record in qualifying, booking pole position in a time of 1:15.866 minutes.

Bottas extends his lead in the 2018 DHL Fastest Lap Award

With his sixth DHL Fastest Lap of the season, Valtteri Bottas has taken a further decisive step towards winning the DHL Fastest Lap Award for the first time. In the last two races of the season, the Mercedes driver can no longer be overtaken, although Daniel Ricciardo on four fastest laps could tie for the trophy if he sets the best time in Brazil as well as in Abu Dhabi.