Valtteri Bottas storms through the field in the Belgian Grand Prix. The Mercedes man clocks up the DHL Fastest Lap for the fourth time this season.

Valtteri Bottas went into the Belgian Grand Prix at Spa-Francorchamps from a deeply unpromising grid position. Having changed his engine, the Mercedes driver was obliged to start from 17th. The situation became even gloomier when Bottas collided with Sergey Sirotkin on the first lap, damaged his front wing and had to make an early pit stop. But by the end of the race, the Finn had stormed through to cross the line in fourth place, setting the DHL Fastest Lap in the process.

Bottas made steady progress through the field, overtaking one opponent after the other, and soon found himself in a points-scoring position. On Lap 29, he eventually came in for his scheduled pit stop, switching from Supersofts to Softs. It was in the period immediately after the change of tires that the Mercedes driver clocked the DHL Fastest Lap with a time of 1:46:286 minutes, also a new lap record. 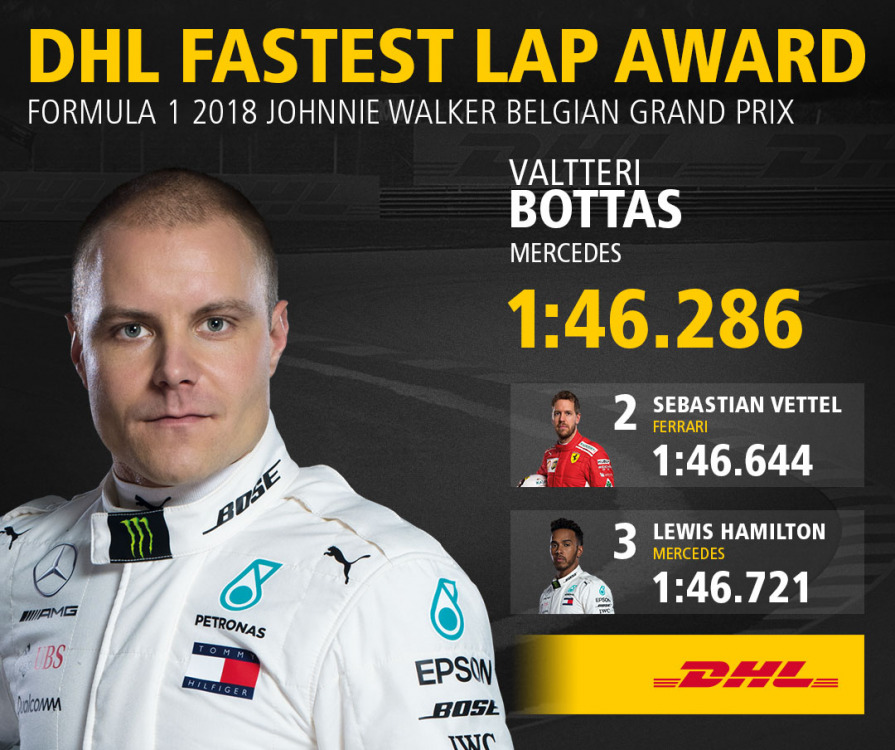 "Our goal for today was damage limitation and we've had a good recovery drive", Bottas said. "I was hoping to maybe get the chance to be on podium, but I had a collision going into Turn 1 which damaged my front wing. After that P4 was the maximum we could get and it's not a bad result given the fact that we started from P17. I actually quite enjoyed the drive today, as I got to overtake a lot of cars."

The second-fastest lap of the race went to Sebastian Vettel, who secured a comfortable victory after overtaking Lewis Hamilton at the start. Vettel’s win at Spa has reduced the points gap on current world championship leader Lewis Hamilton to 17. The Mercedes driver posted the third-fastest lap on the famous circuit in the Ardennes region of Belgium.

With his DHL Fastest Lap of 01:46.286 minutes, Valtteri Bottas has set a new record for the Circuit Spa-Francorchamps, surpassing the previous best time of 1:46.577 minutes set by Sebastian Vettel in 2017.

The fastest race lap ever at Spa was completed in a time of 1:45.108 minutes by Kimi Räikkönen in 2004, albeit on a slightly shorter track configuration.