The Hungaroring is usually a track on which Red Bull Racing excel. The twisting configuration of this circuit just outside Budapest favor cars with sophisticated aerodynamics, and the Bulls have performed well here in recent years. On this occasion, however, the final race weekend before the summer break did not go their way.

Daniel Ricciardo was hampered by rain in qualifying and unable to place his car any higher than twelfth on the grid. In the race itself, he then collided with Sauber driver Marcus Ericsson on the first lap. Not an ideal start, as he fell back to 16th. The Australian then embarked on an impressive pursuit, in the course of which he set the DHL Fastest Lap on Lap 46 with a time of 1:20.012 minutes and worked his way up to finish fourth. 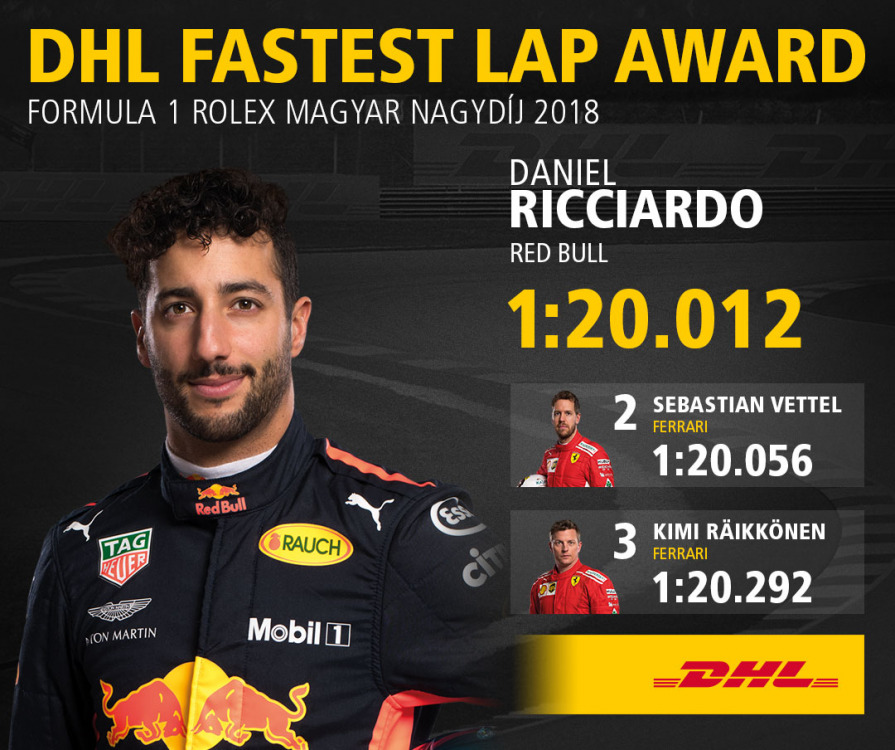 The final stage of the race was especially action packed for Ricciardo. Valtteri Bottas came off worse in a battle with Sebastian Vettel for second place. The Finn was then forced to defend his position against Ricciardo in a no-holds-barred encounter. Another collision ensued, this time between the Mercedes and the Red Bull.

Although Ricciardo’s car was damaged in this incident, he quickly closed the gap to Bottas again. On the final lap of the race, the Australian launched one more attack at the end of the home straight, this time with success, and secured himself a hard-won fourth place.

"Before the incident at the end with Valtteri in Turn 1, I knew he had some damage, so I knew it should be relatively easy to pass him, but he obviously just went too deep into that turn. I couldn’t see his car in my blind spot so I left room, and then I got the hit but fortunately I didn’t spin", Ricciardo said. "I thought it was likely he would get a penalty but I really wanted to pass him on track, which fortunately I could do on the last lap. I was happy today, happy to finish and get some points and have a race I feel I maximized."

Meanwhile, Lewis Hamilton was cruising home to victory. Having started from pole position, the Mercedes driver had no cause to overwork either his engine or his tires as he wrapped up win number six at the Hungaroring. Although Sebastian Vettel managed a degree of damage limitation with second place, he now goes into the summer break 24 points adrift.

For Ricciardo, it was the 13th DHL Fastest Lap of his career. On the all-time Formula 1 leaderboard for this category, the Red Bull driver has drawn level with Riccardo Patrese, Alan Jones and Jacky Icky in 24th place.

Ricciardo takes the lead in the 2018 DHL Fastest Lap Award

With his fourth DHL Fastest Lap of the season, Daniel Ricciardo now reigns supreme in this particular class. In second place is Valtteri Bottas on three fastest laps followed by Max Verstappen on two. Kimi Räikkönen, Sebastian Vettel and Lewis Hamilton have each clocked the DHL Fastest Lap once in 2018.