Beethoven’s original viola in a Moment that Delivered

“I’m shaking with emotion! I can’t believe that I’m holding the actual instrument that Beethoven himself played!” It was a deeply moving experience for Teng Li – Principal Viola of the Los Angeles Philharmonic – when she was presented with Ludwig van Beethoven’s personal viola to perform at the Walt Disney Concert Hall on May 17.

Launching the first leg of DHL’s two-year-long global exhibition ‘BTHVN on Tour’, Malte Boecker, Director of the Beethoven-Haus in Bonn – the birthplace of the world-renowned composer 250 years ago – and Dr. Julia Ronge – curator of the Beethoven-Haus museum – provided a pre-concert introductory lecture focusing on the origin of the historic treasure.

“Beethoven played this viola as a member of the Bonn court orchestra, where musicians were provided with their instruments by their employer, the Archbishop of Cologne, Archduke Max Franz of Austria,” explained Boecker. “Beethoven was listed as violist in the orchestra for the first time in 1790,” Julia Ronge continued. “His viola is believed to have been constructed in 1780 by the famous Viennese violin maker Sebastian Dalinger. After French military occupiers ousted the Archbishop and his court in 1794, the viola was saved by the family of Franz Anton Ries, Beethoven's violin teacher.”

"It is an incredible honor and a completely surreal opportunity for me to play the same viola that Ludwig van Beethoven played some 230 years ago,” said Teng Li. “Perhaps we will be able to recapture the spirit of one of the world's greatest composers, and for a few moments, bring him back to life through the sounds of this fascinating instrument." 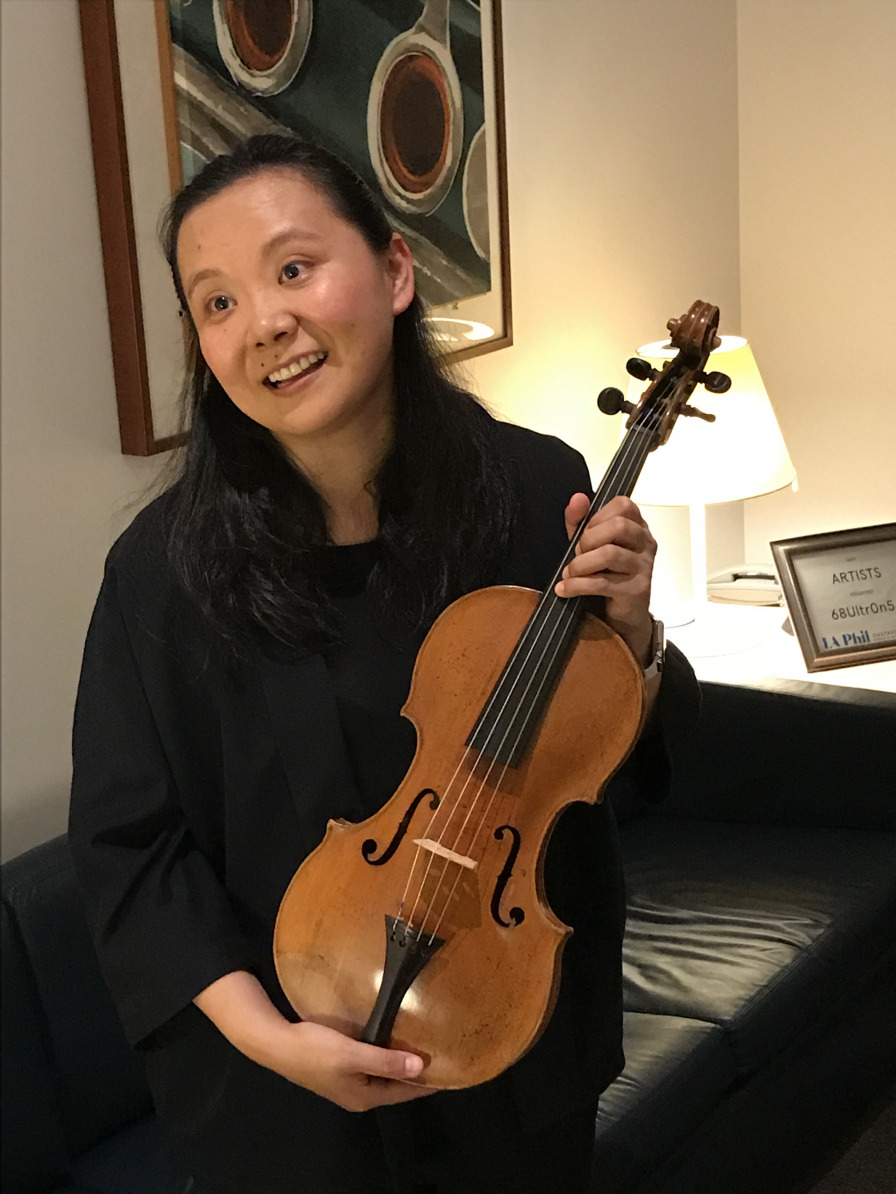 The highlight of the opening night of ‘BTHVN on Tour’ in Los Angeles came next with the kick-off of a special program of concerts commemorating the 250th anniversary of Beethoven’s birth featuring some of the world’s best musicians. Under the baton of Music & Artistic Director Gustavo Dudamel, Chinese piano virtuoso Lang Lang joined the LA Philharmonic in a performance of Beethoven’s Piano Concerto No. 2 in B-flat major, Op. 19.

In the foyer of the Walt Disney Concert Hall, concert-goers were invited to participate in the traveling exhibit ‘BTHVN on Tour’, which consists of eight modules on the life and work of Beethoven and is designed to allow concert hall visitors to directly access the various displays. Multimedia elements provide insight into the composer’s work, such as a digital animation that sheds light on Beethoven’s creative process, showing the individual steps from initial sketch book through to finished music score.

An interactive timeline highlights the important events in Beethoven’s life as well as the larger social/political context of his life from 1770 through 1827. The exhibit also features unique items from the Beethoven-Haus collection – several being shown internationally for the first time – like one of Beethoven’s brass ear trumpets and an original print from Andy Warhol’s 1987 Beethoven Series. A unique audio demonstration allows visitors to even experience the extent of Beethoven’s hearing loss for themselves.

"We’re proud that Beethoven-Haus has entrusted DHL with transporting the priceless artifacts from their collection, which otherwise wouldn’t leave the Bonn-based museum. Numerous original exhibit items and high-quality facsimile reproductions created especially for the exhibition, combined with multimedia technology, give visitors a fascinating look into the life and work of Beethoven,” said Greg Hewitt, CEO for DHL Express U.S. “It’s even more special for us to have the exhibit’s U.S. tour coincide with the DHL 50th anniversary celebration this year.”

When the Los Angeles concert dates end on May 26, the exhibition will continue touring cities in the United States through the fall. The next stops on the tour that commemorates the founding of DHL and the invention of express logistics 50 years ago are planned for New York City, Cincinnati and Boston and, from there, on to venues across Europe and Asia in 2020.