While France’s Jean Pascal Barraque gave the home crowd something to shout about, Fiji’s Vilimoni Botitu secured the IPA and his team clinched the series.

It seemed almost inevitable. After another flawless performance (six wins in six matches), Fiji was crowned champions of the HSBC World Rugby World Cup Sevens Series 2019. The decision came on the final day of the season as Fiji beat the USA in the Cup semi-finals to secure a fourth world series title.

Frenchman Jean Pascal Barraque put on quite a show in front of his home crowd – chalking up 45 points to win the DHL Impact Player Award at the HSBC Paris Sevens.

It was Fiji’s Vilimoni Botitu who made a phenomenal impact on this year’s series, with some incredible stats to prove it: 125 tackles, 24 breaks, 49 offloads and 159 carries gave him a total of 356 points on the DHL Performance Tracker. The performance has earned him the 2019 DHL Impact Player Award for the series.

👏 He enjoyed a sublime season had had a huge impact on his team's HSBC World Rugby Sevens Series win. #DHLRugbypic.twitter.com/qRapqsUUrf

The home crowd at Stade Jean-Bouin certainly had something to shout about. Their own Jean Pascal Barraque (JP) put on an impressive individual display, despite a slightly lackluster performance from the French overall. JP clocked up 8 tackles, 4 line breaks, 8 offloads and 25 carriers to become the DHL Impact Player at the HSBC Paris Sevens 2019.

Japan’s Kameli Raravou Soejima came in second, putting up some fine numbers even though his team struggled as well. With 14 tackles, there were few who got past him over the weekend.

🇫🇷 What a performance it was by Jean Pascal Barraque in front of his home crowd...

🥇 He won the #DHLImpactPlayer Award.

📽️ Check out his best bits from the weekend! #DHLRugby#Paris7spic.twitter.com/oHp9rczUoa

Bush Mwale of Kenya followed in third, with strong stats across the board, which included 7 tackles, and 6 offloads.

And though Vilimoni Botitu and Ben Pinkelman finished in Paris tied fourth with 39 points, the two finished first and second on the overall DHL Performance Tracker for the 2019 Series. Both men had incredible seasons, making a huge impact on their team’s results and the series overall.

Ultimately, it was Botitu who delivered the biggest impact throughout the tournament, putting up brilliant stats in each and every round. With 125 tackles, 24 breaks, 49 offloads and 159 carries, he scored a total of 356 points and won the DHL Impact Player Award of the 2019 Series. 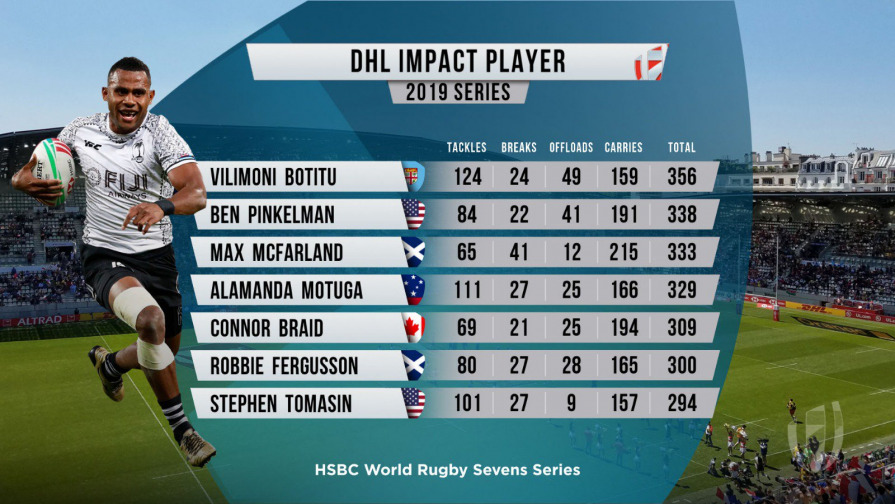 Who else but Fiji

Fiji were crowned champions in Paris, after another almost flawless performance, which saw them beat New Zealand in the final (35-24). They also beat the USA in a decisive semi-final match, crowning them champions of the overall series! The 33-14 win was worthy of winning the series – and it only proved yet again that when at their best, Fiji are virtually unbeatable. 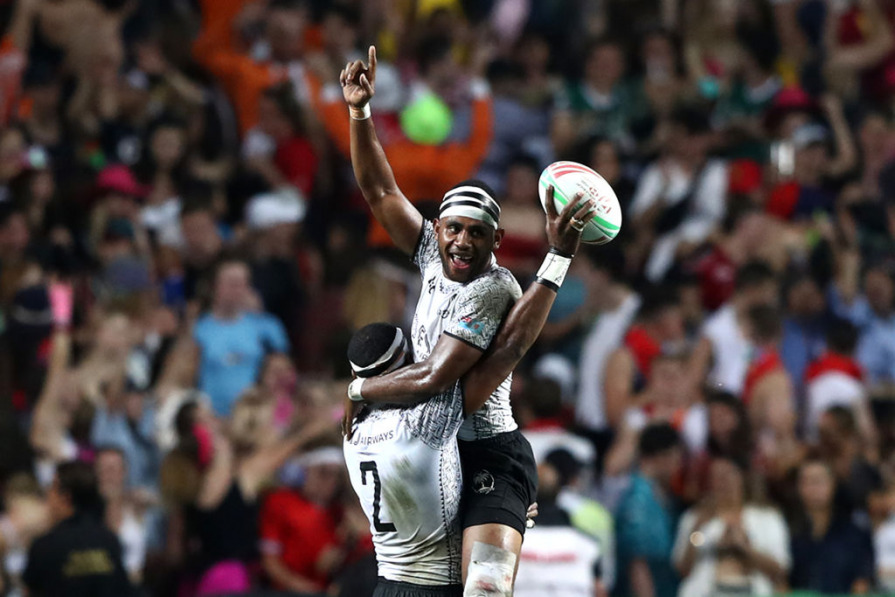 New Zealand ended the series on a high, finishing second, which was their best result in some time, and the first time they’d finished in the top three since Vegas. Except for Scotland running them close in their opening match, New Zealand cruised to the final, yet ultimately the Fijians had too much for them.

The Bronze final saw South Africa beat the USA hands down 24-7. Both sides had impressive tournaments up until the semis, and even then they came up against two very determined sides, desperate to make the final for differing reasons.

Canada won the Challenge Trophy, beating Ireland in the final. It was a great way to round off the season for the Canadians, and as for Ireland, who are the new boys next series, their performances in London and Paris will fill them with great confidence heading into new year.

It was a bittersweet tournament for Japan – as hosts, they enjoyed the announcement that they’d be playing in the 2020 Olympics, however they were unfortunately relegated from the Series after finishing bottom, four points adrift of Wales. Even though they kicked off with a fantastic 17-14 win against the hosts, a narrow 22-21 defeat to Scotland sank them, after Kenya impressively made the Cup Quarter Finals. They finished on a high, beating Wales 33-17 in the 13th place playoff but by that time it was too late for the Cherry Blossoms.
A Fijian Finish
With five wins to their name, including three of the last five tournaments, Fiji were deservedly crowned champions. When they got in their grove this year, they were almost unplayable. Though they went into the tournament only two points ahead of the USA, they finished nine points clear. It was their fourth series win. 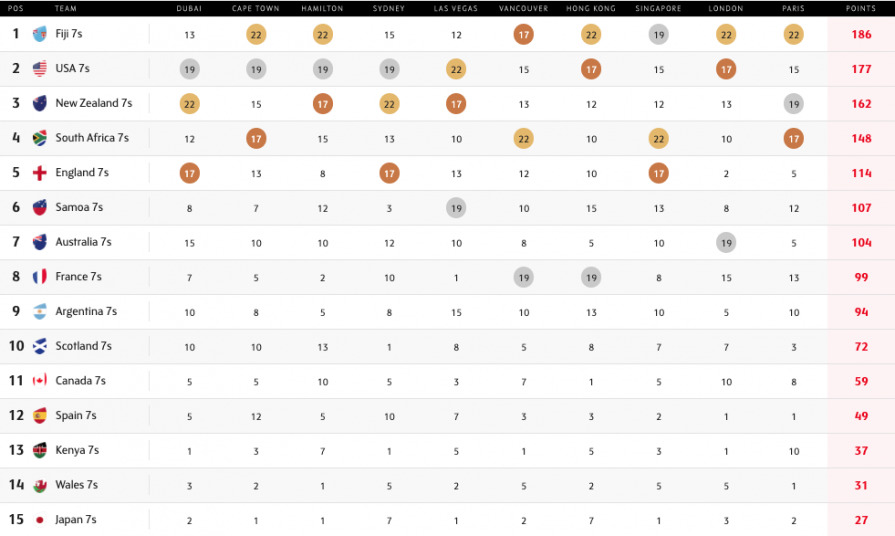 After a phenomenal start, where they reached the first five finals (finally securing a win at their fifth in Vegas), the USA stuttered somewhat in the second half of the series, which allowed Fiji to reel them in and ultimately fly by. Although they finished third twice in the final five rounds, they failed to reach the heights of the opening five. Things certainly looked different at the halfway point. No doubt they’ll be challenging for the series in 2020.

New Zealand finished a further 15 points behind the USA in third. They, too, had strong first half, only to lose speed in the middle and never really regain their momentum.

The final Olympic qualification spot went to last year’s series winners, South Africa. They endured a rather turbulent series, winning in Vancouver and Singapore but failing to make a final in the eight other tournaments. Although they didn’t reach the highs of last year, when on form, they’re a joy to watch.

The battle for survival was intensely fought across the entirety of the season but ultimately, it was Japan who lost and were relegated. It will be exciting to see how Ireland fare next series, after putting in a fantastic display at the final two events. 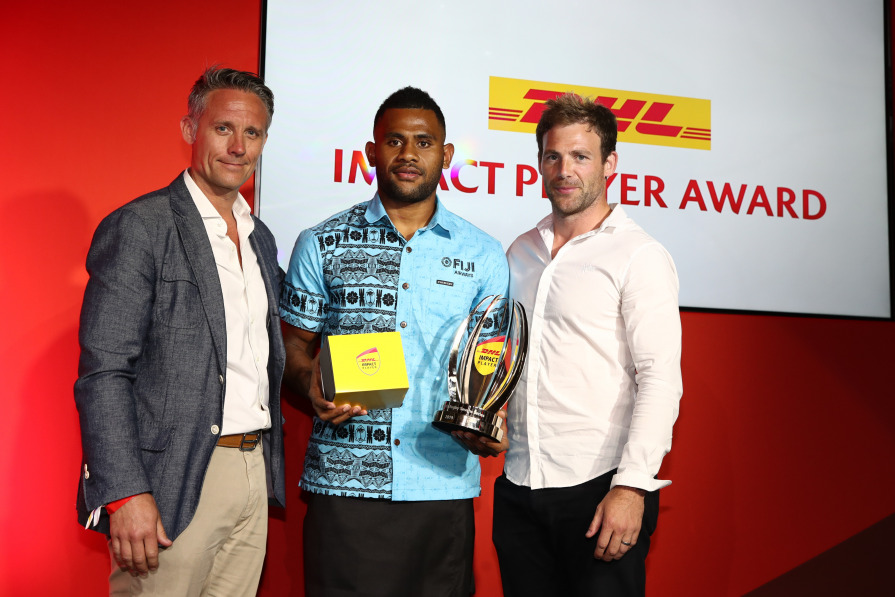