Lucas di Grassi is crowned as the new champion of the electric racing series at the end of the FIA Formula E grand finale in Montreal. Mahindra Racing prevails in the DHL eChampions Award.

Lucas di Grassi has at last achieved his heart’s desire. The ABT Schaeffler Audi Sport driver claimed his first FIA ​​Formula E title in Montreal. Di Grassi had travelled to Canada for the two final ePrixs of the campaign trailing Sebastien Buemi in second place, but over the course of the weekend, he moved above his Swiss rival to finish the campaign with a lead of 24 points.

“With this title, a dream has come true,” says Lucas di Grassi. “Team, family, friends, fans – I could hug them all at once right now. We’ve had three terrific years with many emotions and unforgettable moments, but today’s achievement is the absolute pinnacle and a deserved reward for our unique team morale and fighting spirit. I’m proud to be the champion of Formula E. Thank you to everyone who has made this possible.”

With this title, a dream has come true

The 32-year-old Brazilian was one of the pioneers of Formula E: long before the first electric cars began competing on street circuits, he supported series supremo Alejandro Agag and his deputy Alberto Longo in the design and concept of Formula E and has since been one of its most prominent ambassadors. His involvement has now come full circle – another reason why this title is so special to him. There can hardly be anyone in the paddock or on the grandstands who begrudges Lucas di Grassi this success.

Di Grassi has the entire team to thank for all the hard work they put in. It was also down to a strong finish to the season. At one point, the gap to Buemi was as wide as 43 points, but because the Swiss driver missed the penultimate fixture of the season in New York, this allowed di Grassi to reduce the deficit. In Montreal, Buemi then had a run of bad luck, crashing out in free practice and subsequently being disqualified after the first race. Di Grassi, by contrast, won the first race, moved to the top of the championship table and retained that position in the second race of the weekend.

“I am incredibly happy,” said team boss Hans-Jürgen Abt. “Today, we were rewarded for the fact that we never gave up. For me, this title is up there with our first DTM triumph in 2002. That year too, we were the underdogs, yet we pulled off a sensational result which many people would never have thought us capable of. My thanks go to Lucas, Daniel, the whole team, all of our partners and, of course, the fans: they showed what is possible when you stick together and always believe in yourself.”

Mahindra Racing also had cause for celebration at the end of the grand finale. The Indian team won the DHL eChampions Award which recognizes the unsung heroes who work tirelessly behind the scenes to help make the all-electric racing series the fastest-growing form of motorsport in the world.

Formula E and DHL invited all the teams to nominate those individuals or departments who drive excellence, innovation and pioneering spirit. These stories were presented in a series of short films that take a closer look at how they are pushing the boundaries of innovation. The videos were posted across DHL’s and Formula E’s social media channels throughout the second half of the season.

Mahindra nominated Operations Manager Claudio Corradini, the only person to have won both Formula 1 and Formula E championships. The Italian began his motorsport career with Ferrari at the age of 17 and worked with some of the great names in the sport such as Gilles Villeneuve, Mario Andretti and Alain Prost, before moving on to Benetton, where he won the World Championship title with Michael Schumacher.

A few years later, when Corradini was contemplating retirement from motorsport, he got an offer from NextEV to get involved with the new Formula E. The Italian agreed and that same year won the 2015 Drivers’ Championship with Nelson Piquet Jr. Corradini then joined Mahindra Racing and secured no fewer than ten podium finishes with Nick Heidfeld and Felix Rosenqvist – more than any other team.

Teamchef Dilbagh Gill collected the DHL eChampions Award on behalf of Mahindra at the Gala Dinner. 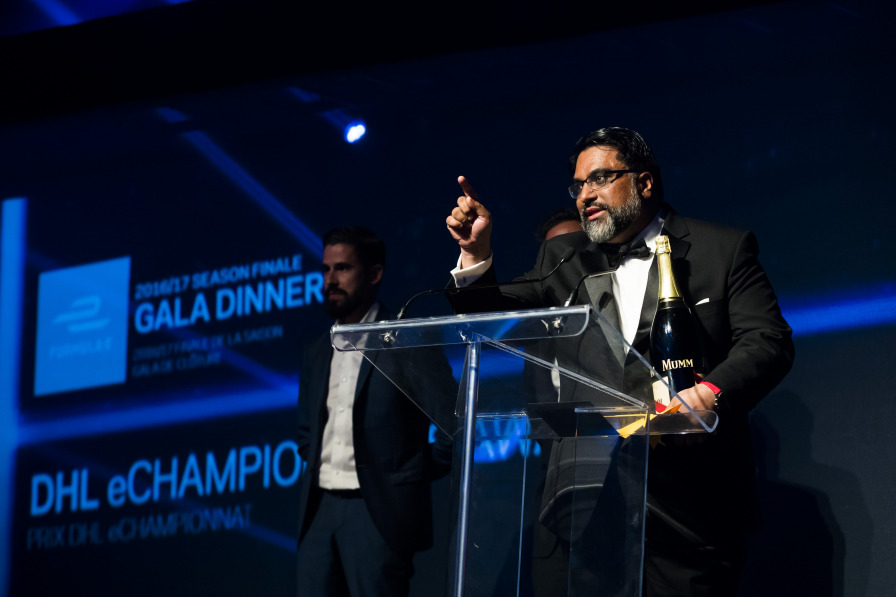 To reward our eChampions winners, DHL will host a unique sustainability experience in Singapore, one of Asia’s greenest cities and home to the DHL Asia-Pacific Innovation Center. During a three-day experience, our winners will explore how to set the benchmark in renewable and responsible urban living.

The last journey of the season takes all the Formula E equipment back to Donington in England, where the racing series has its headquarters. Season Four will start in Hong Kong in early December, with some exciting new destinations on the calendar such as Santiago de Chile, Rome and Sao Paulo. Meanwhile, established venues such as Paris, Monaco and New York remain part of the itinerary. DHL as the Official Founding and Logistics Partner of Formula E is looking forward to the new challenges ahead. 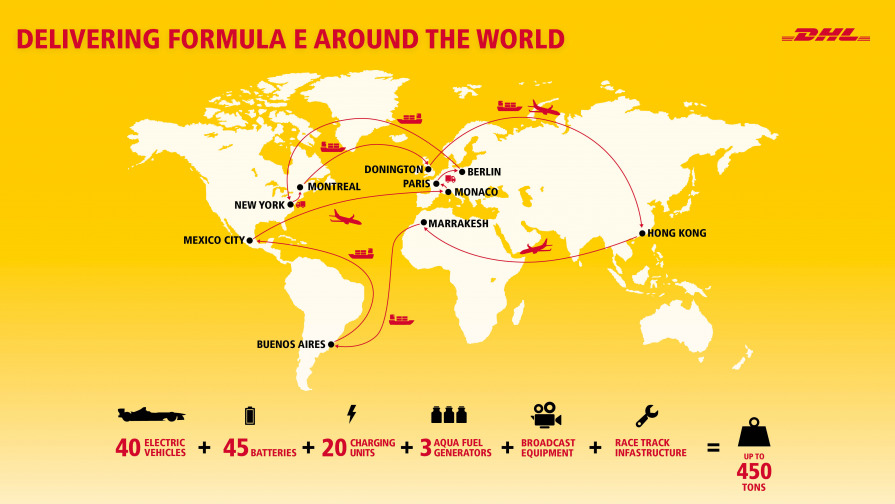