Scoring a Formula 1® victory is all about speed; but is the winner always the fastest? Redefining our standards of speed, the DHL Fastest Lap Award is one for fierce competitors. This is how it works: one driver sets the fastest lap at each race - the award will go to the man who sets the most over the season.

To win will require pure speed – something we at DHL know all about. As the world's leading logistics provider and Official Logistics Partner of Formula 1, we achieve our goals by shortening international routes, facilitating global trade and making the world a smaller place.

The 2020 Formula 1 season concluded with the Abu Dhabi GP at the weekend. Red Bull Racing's Max Verstappen achieved a comfortable lights-to-flag victory, and for quite a spell, it looked like he would also take the bonus point for the DHL Fastest Lap, but Daniel Ricciardo beat his best time on the very last lap.

Verstappen started the race at Yas Marina on medium tires just like the two Mercedes drivers behind him, Valtteri Bottas and Lewis Hamilton. Dutch driver Verstappen managed to pull clear of the pair hunting him down by setting two fastest laps in the early stages and later switched to hard Pirelli tires during a virtual safety car period. Following the restart on Lap 14, Verstappen beat his time from Lap 3 by 1.2 seconds.

That time stood until just before the end. Daniel Ricciardo set the scene for his DHL Fastest Lap on Lap 39 when he came into the pits and switched to mediums, so the tires on his Renault were relatively fresh over the final stages. Ricciardo had already got close to setting a new DHL Fastest Lap on Lap 44 when he equaled Verstappen's time from earlier. Over the final lap, Ricciardo called on all his remaining reserves of strength once again, setting a 1:40.926 to go 0.032 seconds quicker.

"My last lap in the car was the fastest on track and I was pushing hard for that. Very nice," said Ricciardo after the race.

British driver and world champion Lewis Hamilton was declared winner of this year's DHL Fastest Lap Award before this season-ending round after going quickest six times in the course of the season. He has now won the award five times in the last seven years.

Seven-time world champion Lewis Hamilton is the winner of the DHL Fastest Lap Award after posting the fastest lap six times in the 17races. 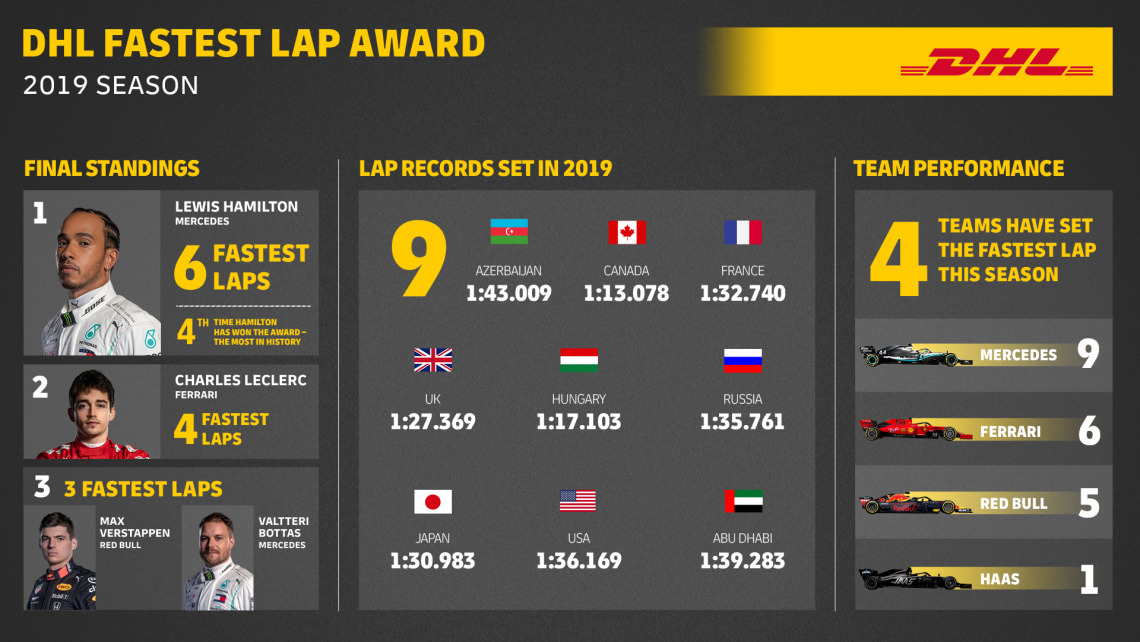