Once again, the regulations have undergone a number of changes for the 2019 Formula 1 season. A whole raft of small things had accumulated that needed improvement as regards both the sporting and technical regulations. In the area of logistics, however, continuity is the name of the game, and DHL will continue in its role as Official Logistics Partner, delivering Formula 1 to grand prix venues around the world. We summarize all the innovations for the new season here.

New aerodynamics: Overtaking is to be made easier, and so, teams unanimously agreed on minor modifications to aerodynamics in the short term. The changes may seem small at first but should improve the problem of overtaking by 20 percent.

The front wing will lose some of its complexity and contain only five main elements in future. Its dimensions have also been altered in order not to lose too much performance, increasing in width from 1.80 meters to 2.00 meters and becoming 2.5 inches deeper and 7.5 inches taller.

Bargeboards will also be pared down in size, leaving engineers with a height of 35 centimeters to play with and not 47.5 as was previously the case. Their length, though, will be boosted by 10 centimeters.

Overall performance will suffer a bit under the new ruleset, but problems when overtaking should become less frequent. 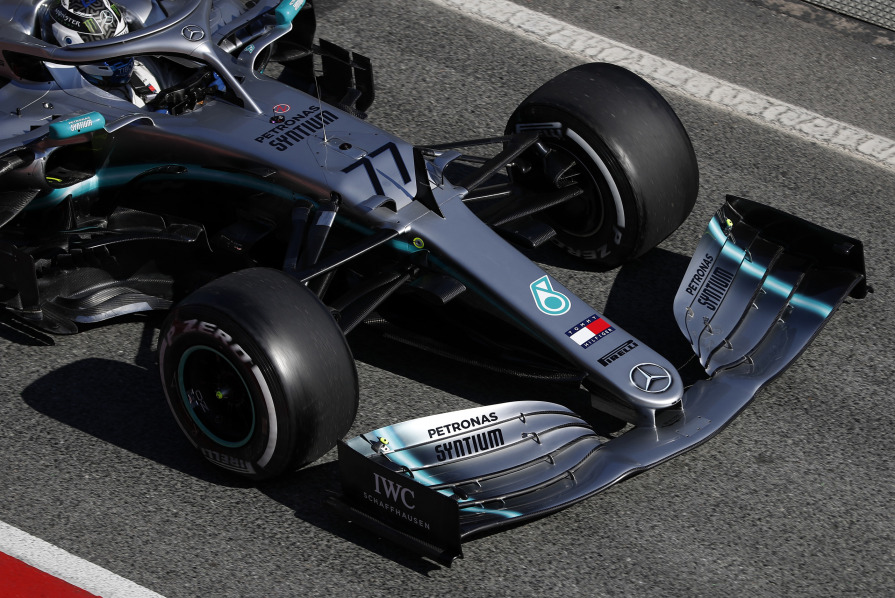 Drivers’ weight: Heavy drivers are at a disadvantage in motor racing. Ballast cannot be distributed to strategically important points, otherwise, drivers would be overweight from the outset. A minimum weight that applies to driver and seat shell is to be introduced in 2019 to counteract the problem. Driver, race overalls and seat must weigh at least 80 kilograms.

Minimum weight: Cars will get heavier for the 2019 season. The minimum weight including driver will go up from 733 to 743 kilograms, continuing a trend set in recent years as Formula 1 cars become heavier. Safety features and hybrid technology have all added to the gain in weight.

Fuel: Cars will be even heavier at the start of the race, as the fuel limit has been raised. 110 kilograms of racing fuel, which is five more than previously, can now be consumed over the race distance in a bid to put a stop to the debate around saving gas.

Oil consumption: New rules concerning engine oil are continually being introduced, because of the suspicion that oil is deliberately being fed into the combustion chamber in order to increase power. A fresh chapter has been added to the ongoing saga for 2019. All additional oil tanks must be empty at the start of each practice session and in qualifying.

Tires: Pirelli have lined up a few innovations of their own. Tires have been updated with new compounds and methods of construction. There will be ‘only’ five different compounds available in 2019 and not seven as before. Hypersofts, Ultrasofts etc have been consigned to history. The new tires will be simply called soft, medium and hard. Red, yellow and white will be the new colors to denote the three different compounds to be used for that particular race weekend. 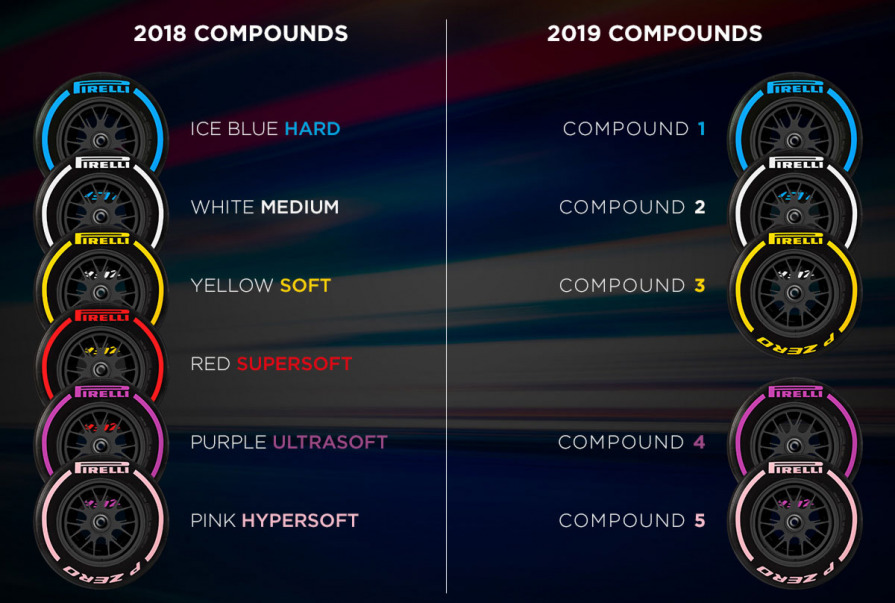 New lights: Formula 1 is to be made even safer with extra rear lights in order to ensure better visibility in poor conditions. The central rain light on the crash structure will remain in place, but LED light strips are to be added to rear wing end plates.

Helmets: Both active and passive safety are to be improved. The FIA has introduced a new helmet standard for 2019 with reinforcement now integrated into the helmet shell, making the glued-on Zylon strip on the upper edge of the visor redundant.

Mirrors: Mirrors were a hot topic last season. Their size has been prescribed for quite some time, but a great deal of discussion has taken place about where exactly to locate them. As of this year, there have been precise rules about the placement of mirrors and in particular, about how they may be attached with one fixing on the chassis and another on the sidepod at most. 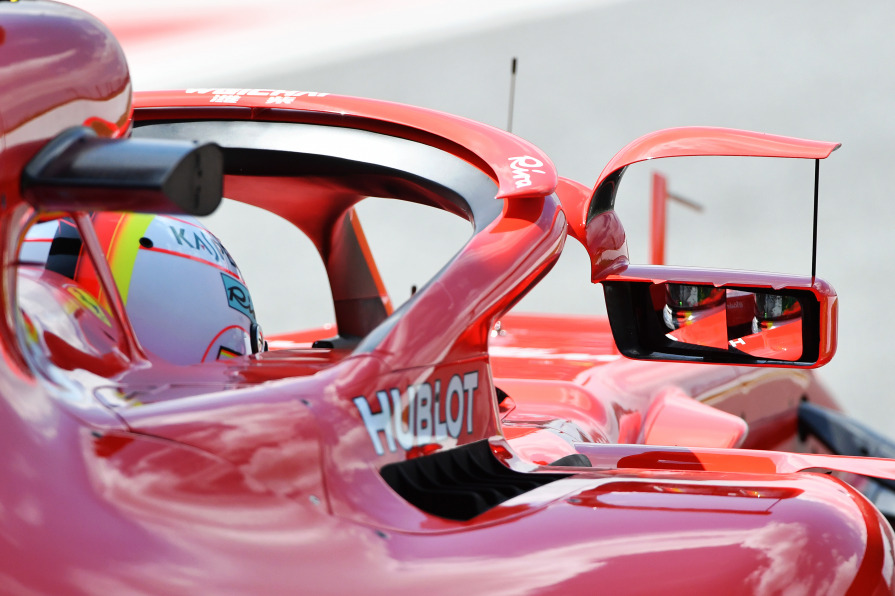 F1 driving license: The rules for the super license have again been revised. Some race series have been either up or downgraded and a minor loophole closed. In future, drivers will only be able to earn points in one race series in a single calendar year.

Penalties: If a driver incurs a penalty exceeding more than 15 positions on the grid, he must automatically line up at the rear of the field. This rule is not new, but what will change is the procedure to be followed when several drivers suffer the same fate, in which case, their grid position will not be determined by when they got the penalty but their result in qualifying.

CFD flow simulations: Restrictions on computer flow simulations will remain in force for the time being but will be lifted entirely in 2021 in an effort to perfect the ruleset with the assistance of FIA teams and the commercial rights holder. Teams will have to share results with other outfits. 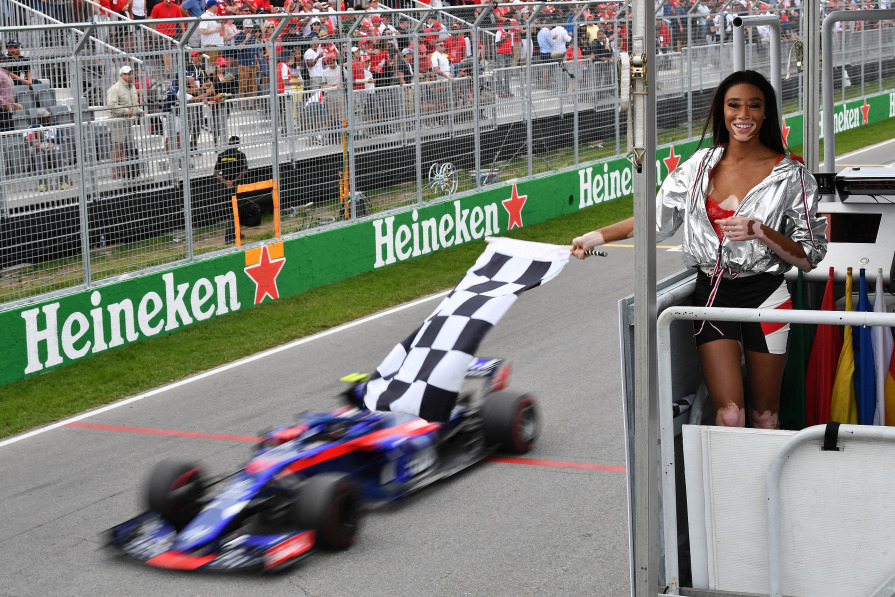 Biometric gloves: Drivers must wear gloves equipped with safety technology during all sessions. The sensors fitted as standard measure drivers’ vital signs and are intended to improve medical care.

Formation lap: Drivers starting out from the pit lane will take part in the formation lap in future. They may also complete ‘recce’ laps before the race but must peel off into the pit lane at the end of the lap and not pass the starting grid.

Delta times: Delta times under safety car and VSC periods will also apply to the safety car line in 2019. Up until now, this small gap has allowed drivers to accelerate on approaching or leaving the pit lane. 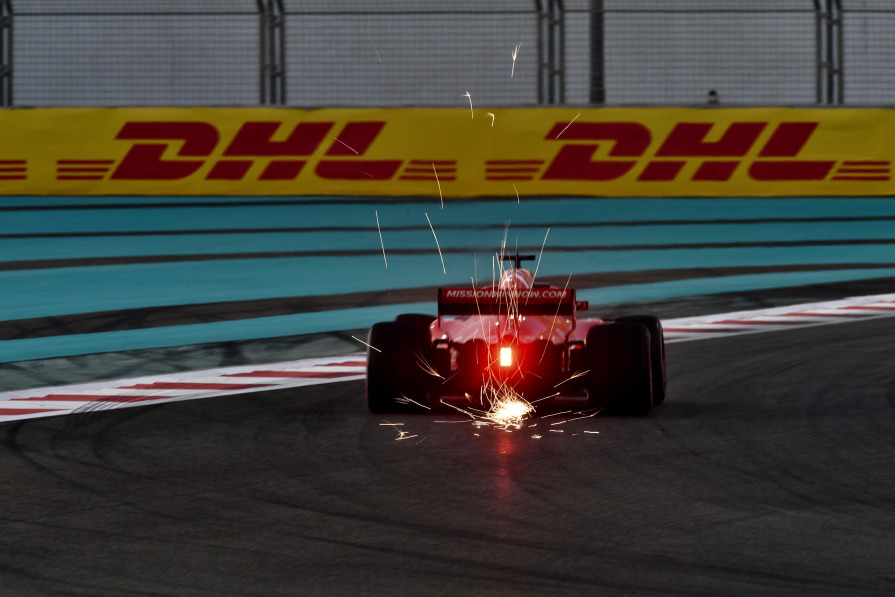 Twenty one races, to which DHL will deliver Formula 1, are scheduled to take place in 2019. The venues have not changed, but the season will be slightly longer. The opener will take place 17th March in Melbourne, Australia. The checkered flag will fall in Abu Dhabi, 1st December.

Due to the season becoming longer, the triple-header first introduced in 2018 will be no more. France and Austria are still back-to-back, but the British GP will take place a fortnight after Spielberg. Bahrain and China will no longer be back-to-back races as is also the case with the Russian and Japanese grands prix. The Russian GP will be run immediately after Singapore.

The tried and tested back-to-back formula for the USA/Mexican grands prix on the North American continent will remain but their order on the calendar reversed, as Formula 1 will stop off first in Mexico City and then race in Austin, Texas, the following week. It’s been a long time since the market for drivers has been this busy. Mercedes and Haas are the only two outfits who will keep their Formula 1 driver pairings unchanged for the 2019 season. Ferrari have parted company with Kimi Räikkönen and signed their junior, Charles Leclerc, in his place. Sparks should fly in the team battle between the driver from Monaco and Sebastian Vettel.

However, Räikkönen is not leaving Formula 1, as he will simply swap cockpits with Leclerc and drive for Sauber. The Iceman has signed a two-year contract with the Swiss outfit. His teammate will be Ferrari’s second junior, Antonio Giovinazzi.

Red Bull must find a way to make up for the loss of Daniel Ricciardo. After protracted negotiations and in a surprise move, the Australian quit Red Bull and signed for Renault. Pierre Gasly will replace him at Red Bull.

Carlos Sainz will make way for Daniel Ricciardo at Renault. The Spanish driver has managed, though, to find a cockpit at McLaren where Fernando Alonso has put his Formula 1 career on hold for the time being. McLaren gave Stoffel Vandoorne his marching orders following his devastating defeat by Alonso. Junior driver, Lando Norris, will replace him. 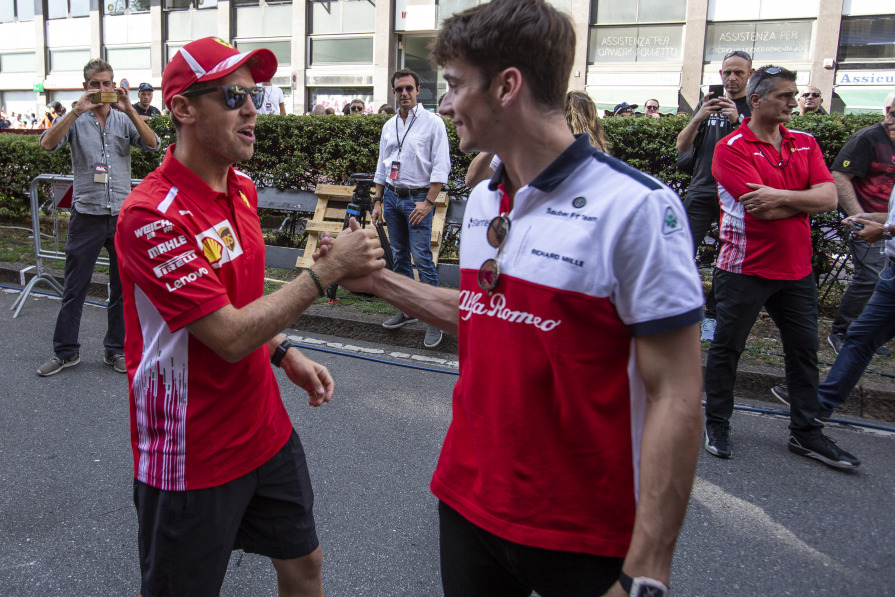 After the change of ownership, Force India will be competing under their new name of Racing Point. While Sergio Perez is sticking with the team, Lance Stroll comes in to replace Esteban Ocon who has been signed as reserve driver at Mercedes for 2019.

The Williams cockpit left vacant following Stroll’s departure will go to Formula 2 Champion and Mercedes Junior, George Russell. Sergey Sirotkin has also left Williams, leaving the door open for Polish driver Robert Kubica to make a sensational but welcome comeback in 2019. He was forced to end his Formula 1 career in 2011 after a serious rally accident.

Toro Rosso will also have two new drivers. Pierre Gasly has been promoted and will be replaced by Daniil Kvyat, who is returning to the fold and will be getting his third chance with Red Bull’s junior team. Brendon Hartley failed to impress in 2018. Alex Albon is his replacement.