Ferrari driver Kimi Räikkönen books his first DHL Fastest Lap of the season in the Austrian GP and sets a new lap record.

Red Bull Racing have done it! Max Verstappen secured the Bulls’ first home victory in the Austrian Grand Prix at Spielberg. In an exciting race packed with incident, Verstappen kept his nerve and secured a famous victory in front of the thousands of fans, who had travelled to the circuit from the Netherlands.

"I’m so happy to win at the Red Bull Ring, and with so many Dutch fans here. It was also so unexpected, and that makes it even better. An amazing weekend", Verstappen said. "If you want to win a race this is the perfect place, in a Red Bull car at the Red Bull Ring."

Verstappen finished 1.5 seconds up on Kimi Räikkönen, who was indeed managing to successfully reel in Red Bull’s driver during the final stages of the race but was unable to get close enough to launch an attack. On the 71st and final lap, Räikkönen burned the DHL Fastest Lap time of 1:06.957 into the asphalt, setting a new lap record for the Red Bull Ring. 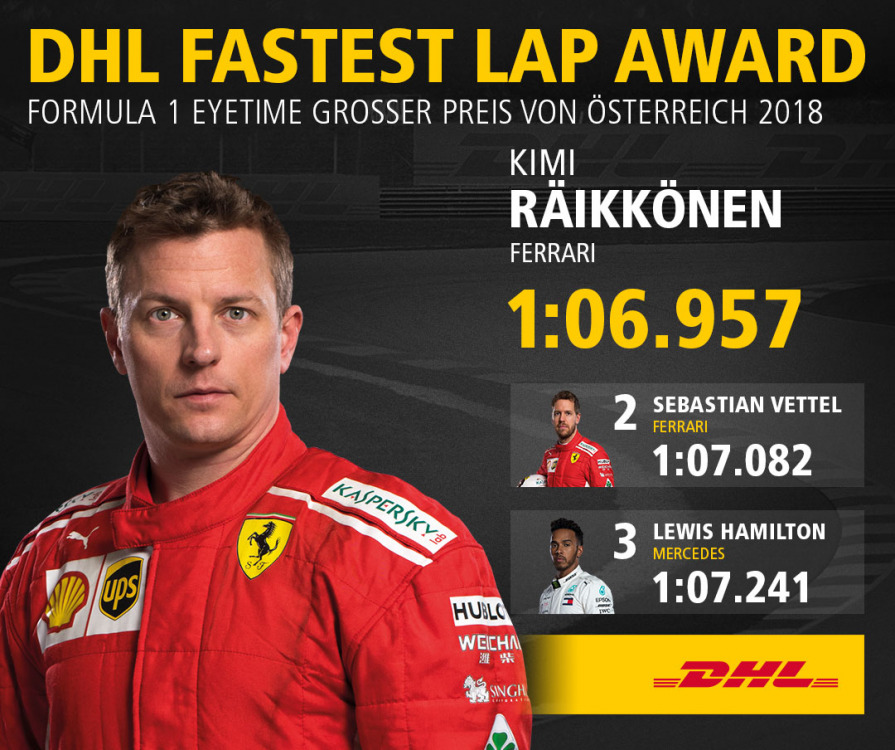 "We were obviously hoping to catch Max, but by then it was perhaps a bit too late", Räikkönen said. "Today we had the speed, but there just weren't enough laps left in the race... Of course we wanted to win, we tried very hard, giving our best, but it was not enough. The good thing is that, as a team, we did a solid job. It was a strong weekend."

Räikkönen’s teammate, Sebastian Vettel, posted the second-fastest lap at Spielberg (1:07.082), followed by Lewis Hamilton (1:07.082), who failed to take the checkered flag because of a technical problem. Vettel finished third and is now only one point behind Hamilton in the World Championship classification.

This is Räikkönen’s first DHL Fastest Lap of the current season and the 46th of his career to date. It puts him in second place on the list of fastest lap high achievers behind Michael Schumacher (77).

With three best times each, Valtteri Bottas and Daniel Ricciardo share the lead in the overall standings of the DHL Fastest Lap Award. Max Verstappen has twice been the fastest man in the race. Räikkönen is now the fourth driver to add his name to the rankings.

From Le Mans to Le Castellet: A history of the French GP